(Minghui.org) On July 20, 2013, Falun Gong practitioners from the Greater New York area held a candlelight vigil in front of the Chinese Consulate in opposition of the 14-year-long persecution of Falun Gong. At the same time, they honored the memory of fellow practitioners in China who lost their lives due to the brutal persecution by the Chinese Communist Party (CCP). 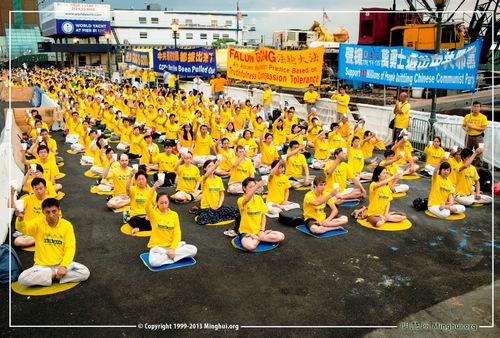 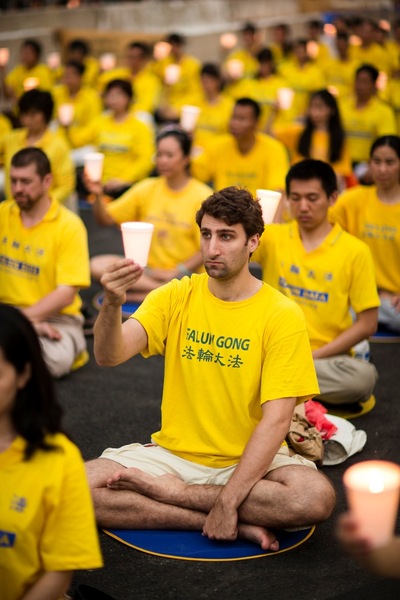 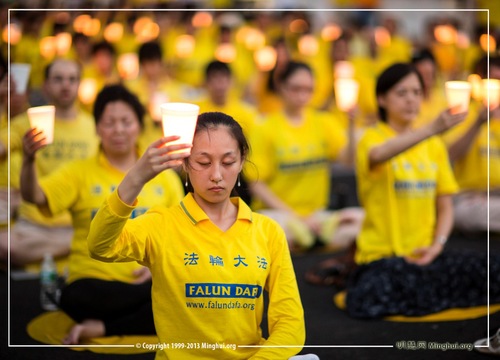 Candlelight vigil in front of the Chinese Consulate in NY on July 20, 2013

On July 20 fourteen years ago, the Jiang Zemin regime deployed the entire state apparatus to start a genocidal persecution of Falun Gong. A sudden torrent of slanderous lies against Falun Gong spread far and wide. Tens of thousands of Falun Gong practitioners were illegally arrested, taken to forced labor camps, sentenced to prison, tortured, taken to brainwashing centers, or forced to leave their homes. Their families were broken apart and their loved ones died.

Most horrendous of all, Falun Gong practitioners were killed as a result of live organ harvesting for exorbitant profits. To date, the Minghui website has reported 3,697 death cases of Falun Gong practitioners due to persecution. The actual death toll is much higher but not reported due to the censorship of information by the CCP. For the past fourteen years, in the face of the bloody persecution, overseas practitioners have continuously clarified the facts in a peaceful and dignified manner.

Just after 5:00 p.m. on July 20 this year, practitioners in New York, wearing yellow T-shirts, lined up and practiced the five sets of exercises. They held banners which displayed messages, “Falun Dafa is Good,” “Stop Persecuting Falun Gong,” “The Root of the Evil CCP Has Already been Removed,” “Atrocities of Live Organ Harvesting will Receive Heavenly Punishment.” The solemn, peaceful scene was accompanied by a rainstorm, but practitioners continued their exercises and meditation. 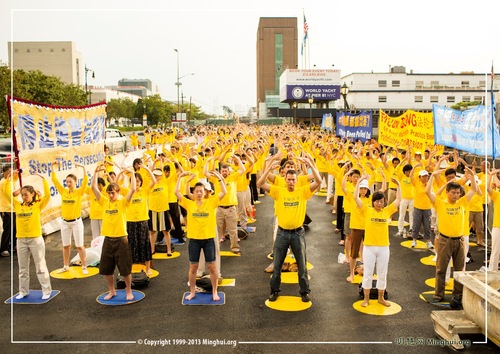 Practitioner Cindy Wei recalled her experience in Beijing years ago. Following the April 25 “Peaceful Appeal” in 1999, the CCP regime started harassing Falun Gong practitioners in various ways. For example, they tried to block off practice sites, send other groups to take over their sites, and instruct people to create disturbances while practitioners were meditating. The day before, on July 19, the CCP had already arrested key members of the Falun Gong Research Association of China in Beijing, and assistants at various practice sites. On July 20, when Cindy Wei and other local practitioners went to the Appeals Office and the State Council to appeal for Falun Gong, they were dragged away and thrown onto a big bus, then taken to Fengtai Stadium.

Xiong Wenqi came to the USA in April this year. She recalled that around 3:00 p.m. on July 20, 1999, all employees across the entire country of China were required to stop working in order to watch a slanderous live program that disparaged Falun Gong on CCTV (China Central TV Station).

Mr. Xiong was sentenced to one year of forced labor and four years in prison during the persecution. He was subjected to brutal torture while in Tilangqiao Prison in Shanghai and was once beaten so badly that a bone was exposed. He went on a hunger strike for over two years to protest the persecution, and suffered enormous physical and mental hardships. His employment was terminated, and following his release and return home, he was placed under long-term surveillance by the CCP police, and lived under highly stressful conditions.

Some of his practitioner acquaintances suffered repeated persecution. He related, “Bai Yindi, a 62-year-old, was taken to a forced labor camp twice, and served a total of five years. She was sentenced to four and a half years in prison after her release from the labor camp. When her prison term was over on May 3 this year, she was sentenced to another six and a half years in prison.”

Wei Lisheng, 34, started practicing Falun Gong when he was 17 – three years before the persecution started. He was illegally arrested in July that year then taken to a forced labor camp for a year. After the TV interception incident on March 5, 2002 (practitioners successfully tapped into the Changchun TV network and broadcast truth-clarification videos), the CCP put him on the national “wanted list” and he was forced to leave home, and was unable to work or live a normal life. He managed to move to Thailand in 2007. Thai authorities arrested him during the ASAN summit (Association of Southeast Asian Nations) due to pressure from the CCP regime, and he was placed in jail for two years. His friends Lei Ming, Liu Chengjun, and Liang Zhenxing, who were also involved in the TV interception, were all tortured to death by CCP police. Mr. Wei felt fortunate to be able to come to the USA, and hoped that the truth about Falun Gong would spread throughout the world.

When evening came, practitioners lit candles to honor the memory of their fellow practitioners in China who had lost their lives during the persecution. Their solemn and compassionate faces were reflected in the gentle candlelight. Passersby showed admiration for practitioners' peaceful resistance to the violent persecution.

Robert, an immigrant from Armenia, said emotionally, “I walk past this place often and always see a few elderly ladies sitting there. I'm deeply touched by their perseverance. We have also been through persecution, simply because our belief was different from our government's demands. I can appreciate how they feel.”

Professional ballerina Stephanie Burg said, “I think the message they are passing is very beautiful, peaceful, and calm.”

Musician Jack Burg shared his feelings, “I can't see anything wrong with this. I can't understand why people are being persecuted simply for practicing Falun Gong. It [the persecution] is such a stupid decision.”