August 29, 2013 |   By a Minghui correspondent from Liaoning Province, China

(Minghui.org) Falun Gong practitioners in China are illegally arrested and incarcerated simply for striving to be good people and living by the principles of Truthfulness-Compassion-Forbearance. In detention, they are interrogated and tortured to force them to give up their belief. Some practitioners protest the persecution with hunger strikes and are consequently brutally force-fed – not to keep them alive but as a form of torture.

Even during their court trials, practitioners' rights are trampled, and it is more common than not for their lawyers to be interfered with when they try to defend their clients. The following is a heartbreaking example of the brutal treatment recently received by two law-abiding citizens at the hands of the regime's judicial department.

The persecution of Mr. Han Chunlong and Mr. Chen Xinye

After more than six months of incarceration in a detention center, Mr. Han Chunlong and Mr. Chen Xinye were recently tried in the Zhenxing District Court in Dandong City, Liaoning Province. They were both sentenced to four years in prison and were to be imprisoned in one of the prisons located in Shenyang City, Liaoning Province, connected to the notorious Masanjia Prison.

Prison officials refused to admit Mr. Han due to his health, but the Dandong Detention Center refused to release him. 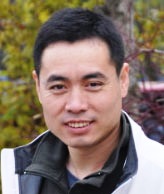 Mr. Chen Xinye before he was arrested 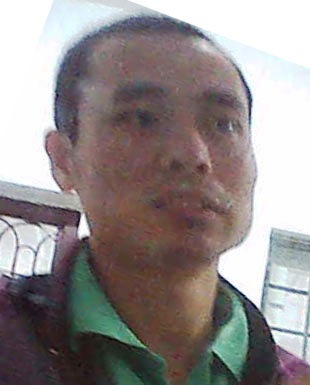 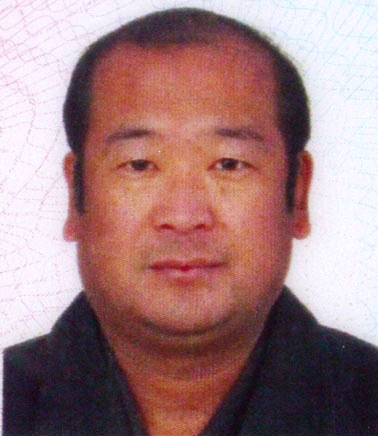 Mr. Han Chunlong before he was arrested 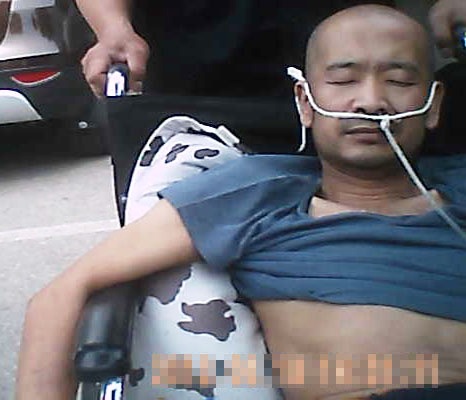 Mr. Han Chunlong after being tortured in detention

Mr. Han and Mr. Chen were illegally arrested while they were on a business trip in Dandong. Police officers interrogated and beat them. When Mr. Han held a hunger strike to protest the illegal detention, he was brutally force-fed while handcuffed and shackled. The feeding tube and a catheter were left in around the clock. After being tortured for a long time, Mr. Han's organs began to malfunction. He was finally admitted to a hospital.

Mr. Chen and Mr. Han worked at the same company. Mr. Chen was a manager and Mr. Han was a salesman who also worked as a driver. On December 11, 2012, they went to Dandong on a business trip and stayed at the Dantie Hotel. At around 10:00 a.m. that day, while they were having business meetings at the hotel, about six police officers broke into their room, including Du Guojun from the Domestic Security Division of the Zhenxing District; Wang Runlong, the deputy director of the Zhenxing District Police Department; and Yu Tiemin and Wang Zhi, director and deputy director of the Zhenxing District Railroad Police Station. They were arrested and the police confiscated two notebook computers, two cell phones, their wallets, cash, and bank cards. The men were charged with a trumped-up “crime” of intercepting emails from their computer.

Mr. Han and Mr. Chen were detained and brutally interrogated at the Sidaoqiao Police Station. Since both of them refused to give any information, they were brutally beaten. Officer Li Xihua slapped Mr. Han and kicked him to the ground. Six officers then surrounded him and beat him at the same time. Officer Xiao Qiang sprayed water with hot sauce on his face. Mr. Han's face stung and he coughed uncontrollably. After the beating, he was deaf in his left ear. Mr. Chen was beaten in another room.

Later, the police grabbed their hands and forced both practitioners sign some papers. On December 13, 2012, both men were sent to the Dandong First Detention Center despite the fact that Mr. Han had high blood pressure and a rapid heart beat.

In the Dandong First Detention Center, Mr. Han held a protest hunger strike and was force-fed. On December 17, 2012, their two lawyers, hired by the families of the two men, visited them in the detention center. Mr. Han told them how they had been arrested and how he was tortured during interrogation at the police station. However, the next day, Mr. Han was subjected to more severe torture. He was put in handcuffs and shackles and locked to metal rings by the handcuffs and the shackles. He was forced to stay like that around clock. The guards force-fed him in this position three times a day. The feeding tube was inserted through his nose and was not removed. A catheter was inserted and also left in around the clock. After being tortured, his legs were disabled—one was severely swollen and he was unable to walk. He had high blood pressure and also suffered from severe back pain. 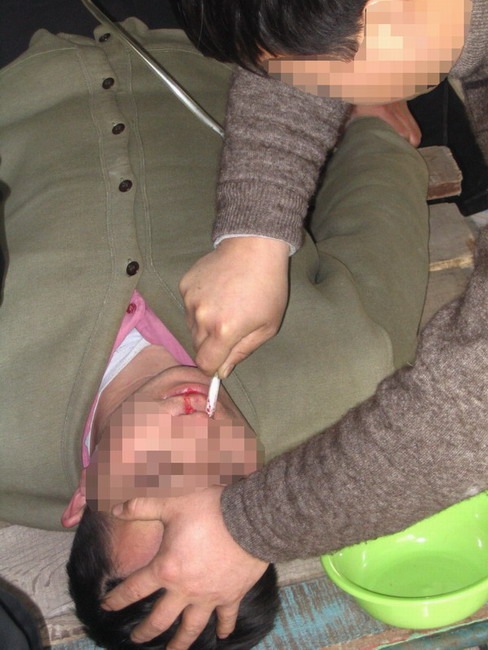 Officer Zhang Wei from the Sidaoqiao Police Station interrogated Mr. Han again in the detention center. Zhang had participated in the interrogation of Mr. Han in the police station and also forced him to sign the paperwork.

On January 9, 2013, the lawyers went to see Mr. Han in the detention center. They were told that he was unable to move and was not allowed to be visited. The lawyers protested, and Wang Jing, the deputy director of the detention center, finally granted their request. The lawyers met with Mr. Han in the entrance hall. He was carried out by two detainees with his hands cuffed behind his back and the feeding tube still in his nose. The vomit from being force-fed was all over his face and his clothes. He was extremely weak and his breathing was shallow. He told the lawyers that he felt dizzy.

The lawyers went straight to the Sidaoqiao Police Station to investigate Mr. Han's mistreatment. Zhang Wei received them but he told them that he did not know much about the case and asked them to hand the materials to Yu Tiemin, the director of the police station. But Yu refused to meet with them stating no reason for the refusal. The next morning, the lawyers met with the deputy director of the police station, Wang Zhi. They told him about the case, and Wang accepted the materials from them.

On January 24, 2013, Mr. Han had severe pain in his stomach, could not urinate the whole day, and had a high fever. Later in the day, he was taken to the Dandong Center Hospital. He was diagnosed with kidney malfunction, kidney stones, bladder stones, and a stress ulcer. After a few days in the hospital, he was sent back to the detention center.

No response to appeal

Mr. Han, his family, and his lawyers appealed on January 24, 2013. They demanded that the charges against him be dropped, that he be released immediately, and that those who interrogated and tortured him be punished. They received no reply.

Mr. Han was tried in the Zhenxing District Court for the first time on April 12, 2013. He started to describe the torture he had suffered from since his arrest, but Judge Tao Zhanhua interrupted him and did not allow him to talk about it. When his lawyer argued, Tao had his lawyer removed from the courtroom.

On April 26, 2013, Mr. Han's lawyers came to the court to continue defending him, but Tao refused to let them defend Mr. Han, unless they agreed to follow his orders.

Mr. Han's second trial was scheduled for May 14, 2013. When the lawyers went to see Mr. Han in the detention center the day before the trial, director Wang Jing told them to persuade him to eat, or they would not be allowed to see him. The lawyers agreed to try. Two guards pushed him out in a wheelchair. He was unable to walk and had difficulty breathing with the feeding tube still inserted through his nose.

On May 28, 2013, despite Mr. Han still being weak, he and Mr. Chen were tried in the Zhenxing District Court. When Mr. Han arrived at the courthouse, he was carried out of a police car in a wheelchair. His face was pale and he was emaciated. He was too weak to talk and had difficulty breathing. However, the judge declared that he had disrespected the court and therefore did not allow his family members to enter the courtroom. 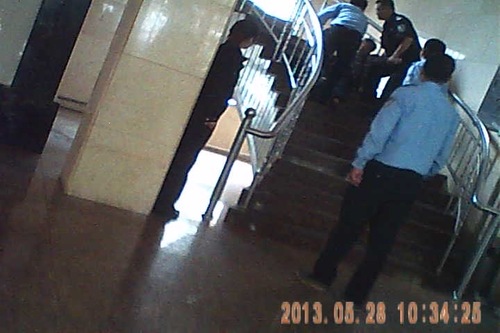 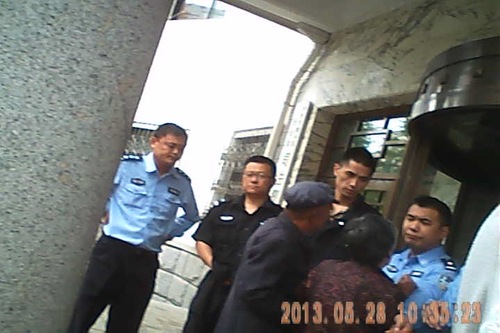 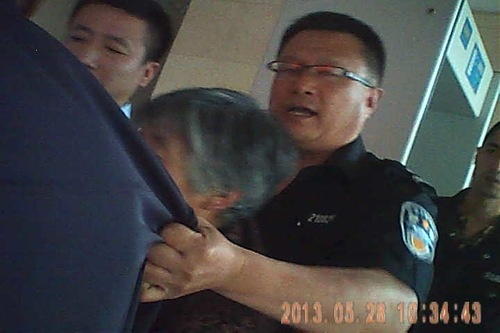 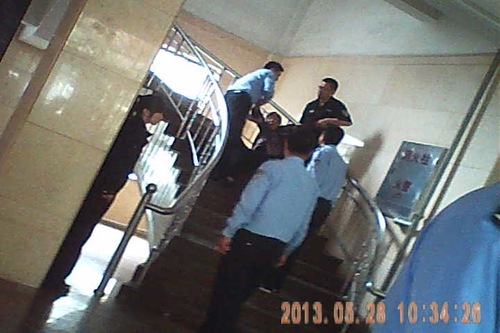 Pictures taken on the day of the trial, showing police prohibiting Mr. Han's family from attending his hearing

When Mr. Han's parents, both in their 70s, saw his condition, they were outraged and wanted to get into the courtroom, but the bailiffs pushed them down. When they tried to enter again, the bailiffs pulled them away and detained them for an hour and a half. They were released after the hearing was over. Mr. Chen's family was also pulled away outside the courthouse gate.

Sentenced to four years in prison

On May 31, 2013, the court sentenced Mr. Han and Mr. Chen each to four years in prison. When Mr. Chen's family heard that they were to be sent to Masanjia Prison on June 18, 2013, they went to the prison gate and waited for their arrival.

When the two police vans arrived around 1:30 p.m., Mr. Han looked weak and pained. Mr. Chen's family followed the van that Mr. Chen was in and shouted, “Chen Xinye is a good person and should be released.” About 2:30 p.m., Mr. Han was pushed into the prison in a wheelchair. Prison officials refused to accept him due to his poor health. He was taken back to the Dandong Detention Center.

Mr. Chen's family asked to see him, but they were not allowed to because Mr. Chen was a Falun Gong practitioner.

The next day, Mr. Han's family went to the Dandong Detention Center to request his release. The officials there refused to release him, saying that they could not report the case to the court without the rejection form from the prison. They went to the Zhenxing Court on June 22, 2013, to see Judge Tao Zhanhua and requested Mr. Han's release again. But Tao refused, saying that they might send Mr. Han to another prison.