(Minghui.org) Ms. Qi Fengmin, from Baicheng City, Jilin Province, was arrested by local police on April 9, 2013, and now faces trial and illegal sentencing by the Chinese Communist regime. She had previously been arrested in July 2008, and wrongfully imprisoned for five years.

Ms. Qi's relatives were heartbroken upon seeing Ms. Qi's younger daughter crying about losing her mother once again. They know very well how badly their hearts were hurt by the multiple arrests, and they were on the brink of a mental collapse. They knew their sister, Ms. Qi, was subjected to inhumane torture during the five years of wrongful imprisonment, and they firmly believed in her innocence. They decided to rescue their sister no matter what, as Ms. Qi's daughters needed their mother and a home.

Ms. Qi gave Falun Gong informational CDs to a person repairing his bike by the roadside on April 9, 2013, and this person reported her to police. Deputy director Lv Jizhou, instructor Yu Hongli, and police officer Hao Yanhui of the Guangming Police Station in Baicheng City, Jilin Province arrested Ms. Qi and took her to the Guangming Police Station. They went to Ms. Qi's home afterwards and ransacked it. Ms. Qi was imprisoned at the Baicheng City Detention Center and her school-aged daughters were told, “Your mother will be detained for 15 days.”

Her daughters could not help but cry for several days after suddenly hearing the news. Ms. Qi was taken to the Tongyu County Detention Center on April 15, and the next day her relatives went to the police station to inquire. Lv Jizhou said, “Ms. Qi was sentenced before. She became very stubborn in prison (for not giving up practicing Falun Gong) and didn't cooperate with us, so we will sentence her again.”

The Taobei Police Department of Baicheng City approved Ms. Qi's arrest on April 27, 2013. Prior to this, Ms. Qi and her relatives were told that she would be detained for 15 days before being released.

Ms. Qi's relatives and daughters went to the Domestic Security Division in the Taobei District of Baicheng City and tearfully asked the director, Tian Xiaoping, to release their mother. The daughters promised to closely watch her and not allow her to go out if she was released. (They did not know the true situation about Falun Gong, as their mother was not by their side for long periods of time due to persecution and the regime's slander.)

Facing this scene, anyone else would have been touched, but Tian Xiaoping told them it was too late, and faked a sympathetic appearance, deceiving them by saying that he would do his best to sentence Ms. Qi with a lighter term.

During this period Ms. Qi's relatives also frequently went to relevant government offices to appeal and demand Ms. Qi's unconditional release. However, the personnel of the Procuratorate, the Domestic Security Division of Taobei District, and the Guangming Police Station dared not meet with them or give them a reasonable answer. They avoided their responsibilities by saying that Ms. Qi's case was not handled by them, and they were dishonest with Ms. Qi's relatives. In reality, they never stopped persecuting Ms. Qi behind the scenes.

Zhang Nannan, chief of the Prosecution Section of the Procuratorate of Taobei District, illegally prosecuted Ms. Qi on June 10, and submitted the case to the Taobei District Court. The case handler was Zhang Enyou, and other involved personnel included court director Liu Xuejun, deputy director Fu Qiang, deputy secretaries Hu Zhongbao, Chu Xianwu, Tao Lijuan, and others. As law enforcers, when the Chinese Communist regime's 'political needs' conflict with the law, the law is violated, and things are done according to the so-called 'political needs.'

Ms. Qi Fengmin, 45, is from Shengfa Village, Xicheng Town, Keshan County, Heilongjiang Province. She is a diligent and kind woman from the countryside. In 1998 she encountered a group of Falun Gong practitioners by chance. After reading the book Zhuan Falun she not only benefited physically, but the book also helped her to purify her mind and body. She realized that she should not just follow the trend in our current materialist society, but should instead obey the standards of Truthfulness-Compassion-Forbearance, and be an unselfish, good person.

This kind and honest country woman was brutally persecuted by the Chinese regime multiple times. Her family was broken apart, and consequently a family member died. Her mother-in-law died in August 2010, from extreme grief, and was severely harmed both mentally and physically.

Her husband was terrified by the Chinese Communist regime's lies and deceit, and reluctantly divorced Ms. Qi. Her two daughters were facing college entrance exams, which was a critical point in their lives. They should have been cared for by their mother at that time, but they instead had to suffer the great pain of worrying about their mother's safety.

Five Years of Imprisonment and Torture

Police chief Liu Ruifeng, along with Li Xiaofeng and Nie Fengzhi from Dongbei Street Police Station in Keshan County, along with other police officers from Keshan County Police Department and 610 Office broke into Ms. Qi's home on July 4, 2008, before the Olympic Games. The police didn't show any ID and robbed her of her personal belongings valued at over 15,000 yuan, including a laptop computer. They forcibly took Ms. Qi to the police station and imprisoned her at the Keshan County Detention Center.

The wardens warned her to not to do the exercises. After four months of illegal imprisonment, she was transferred to the Qiqihar Detention Center where a trial was conducted in a meeting room, and Ms. Qi was sentenced to five years of imprisonment under the charge of “Utilizing XX (-- slanderous words omitted) to sabotage the implementation of law.” Participants at the trial included chief judge Wang Yumin and secretary Chen Dejun of the Keshan County Court. Falun Gong teaches people to do good deeds. The Chinese Communist regime has sabotaged the implementation of law and harmed people under the guise of law.

Ms. Qi was taken to a stronghold for "reforming" Falun Gong practitioners, the Eleventh Prison Area of Heilongjiang Provincial Women's Prison, on February 25, 2009. Each cell contained six people who were watched over by two criminal inmates. The practitioners were followed wherever they went, even to the restroom day and night.

Criminal inmate Cui Xiang forced practitioners, including Ms. Qi, to watch videos slandering Dafa and its Master. They tried to forcibly brainwash Ms. Qi with these videos and the evil theories that the "helpers" presented. If practitioners argued with them, Cui Xiang vehemently berated them. If a practitioner didn't "reform," the wardens used all means including deceit, threats, and brutal tortures.

After nine months of mental torture, Ms. Qi was dispatched to a workshop for slave labor, which included packaging toothpicks and cotton swabs, gluing together paper bags and cardboard, etc. The workshop was very dirty, and rat feces was everywhere. If she could not finish the quota, she had to take the task back to her cell to continue until midnight or the next morning. She was subjected to long-term heavy labor. Practitioners who wrote the "Solemn Declarations" were punished with extended jail terms and torture while being locked up in solitary confinement. During the long five years, Ms. Qi's daughters and relatives hoped for her early return. Ms. Qi was finally released in July 2012.

Although they could not stay home because the police from Keshan County were still looking for Ms. Qi, and their life was very poor and difficult, the most important thing for the daughters was to always be with their mother. Due to the long separation their mother's loving care had faded in their memory. After reuniting with Ms. Qi, they gradually felt the happiness of possessing a mother's love again. At that moment, they never could have imagined that the worst was yet to come, and their mother, who had just gotten out of prison 10 months ago, would be arrested by police and face a trial once again! They lost their mother yet again shortly after feeling their mother's love.

We hereby appeal to all kind people in Baicheng City to extend helping hands to Ms. Qi and her daughters to prevent tragedy from happening again. 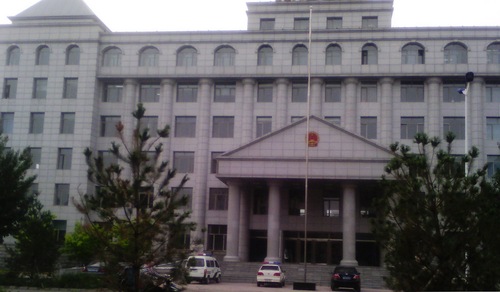