Mr. Zhang Qingchao was the deputy Party secretary of Huaiqiao Township, Quzhou County, Hebei Province when the Chinese Communist regime launched the persecution of Falun Dafa on July 20, 1999. He was deposed for telling others the facts of Falun Dafa and the persecution. For the past twelve years, he had been incarcerated twice at the Handan Forced Labor Camp. The township did not let him return to work after his last release. Under the pain and pressure the persecution continued to cause him, Mr. Zhang's health deteriorated and he passed away on March 7, 2012. 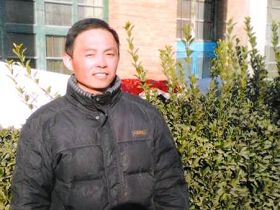 Mr. Zhang was arrested for telling others the facts about the persecution of Falun Dafa in Qiu County in 2002. Officers from the Liangerzhuang Police Station took him to the police station where they brutally beat him using a metal bar.

Mr. Zhang was later incarcerated in the Qiu County Detention Center for more than a month.

After he was released, police from the Qiu County Police Department and the Houchun Town Police Station in Quzhou County went to his home many times to harass him. They even tried to arrest him again, but were stopped by villagers, who were outraged by injustice and spoke out in protest.

Officers from the Houchun Township Police Station arrested Mr. Zhang at his office in the Huaiqiao Township government in the summer of 2004. They took him directly to the Handan Forced Labor Camp where he was incarcerated for eighteen months.

He was forced to get up early and make wreathes until 9:30 p.m., with almost no breaks. The guards and inmates cursed and beat him when he was not able to finish the quota. They worked and ate daily in a hall filled with dirt in the air, which made you choke, with the smell of raw materials and restrooms.

Mr. Zhang was arrested on his way home from work by police from the Houchun Town Police Station at 10:00 am on September 13, 2009. Officers took away his half a year salary of 6,300 yuan, which he had just received from work.

The officers went to his parents' home and lied to them, saying, “We are Zhang Qingchao's coworkers and we need to find him to attend a meeting. Where is his new home?” His mother was deceived and took them to Mr. Zhang's home, and there was no one at home. The officers made her leave, and then broke into the home and confiscated his Falun Dafa books, a picture of the founder of Falun Dafa, DVD player, and some cash.

Mr. Zhang's mother went to the police station after she learned what happened. The officers drove her out and told her that Mr. Zhang had been taken to the Handan Forced Labor Camp. She was nearly 80 years old. She had been in good health, but she was devastated by the incident, which she blamed herself for, and passed away on November 15, 2009.

The labor camp did not allow Mr. Zhang to go to the funeral, and he was distraught over his mother's death.

Died from Pain and Pressure

Mr. Zhang was released on December 13, 2010. He asked the Huaiqiao Township government if he could return to work, but he was rejected.

His family, elderly father, and his wife and their children were all dependent on his salary. Under the pain and pressure the persecution continued to cause him, Mr. Zhang's health deteriorated and he passed away on March 7, 2012.