Melbourne, Australia: March and Rally Call for an End to the Persecution in China (Photos)

(Minghui.org) Practitioners in Melbourne, Australia, held a march and a rally on July 20, 2013, to mark 14 years of the Chinese communist regime's persecution of Falun Gong in China. The regime launched a brutal campaign to eradicate the peaceful meditation practice in July 1999, imprisoning tens of thousands of practitioners and spreading massive propaganda to slander and defame the practice. The vile oppression has continued to this day.

Despite the rainy weather and the chilly temperature of just 5° C (41° F), rally and march participants persevered in their quest to raise public awareness of the persecution and gain public support. Many passersby stopped to watch the events and sign a petition to call for the end of the persecution.

The Divine Land Marching Band, composed of Falun Gong practitioners, led the march across downtown Melbourne. Other practitioners followed with banners condemning the crimes committed by the Chinese regime. 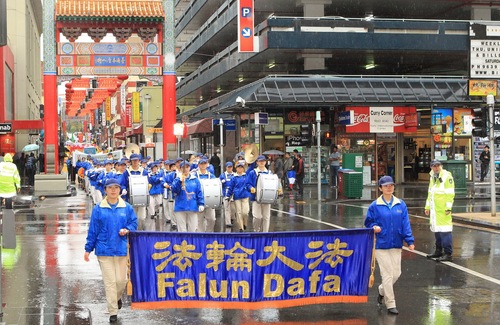 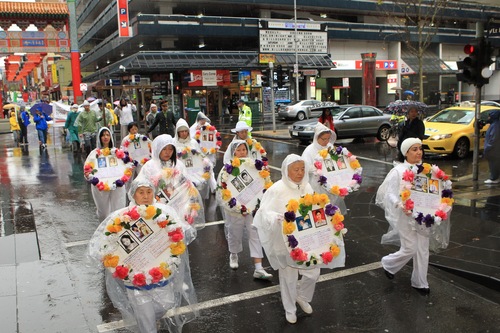 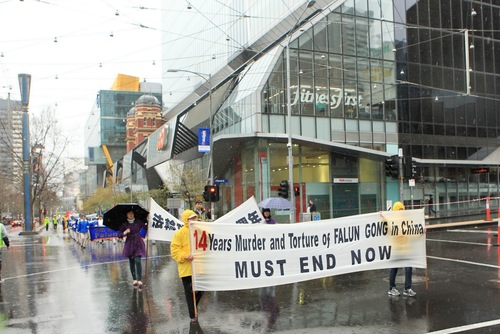 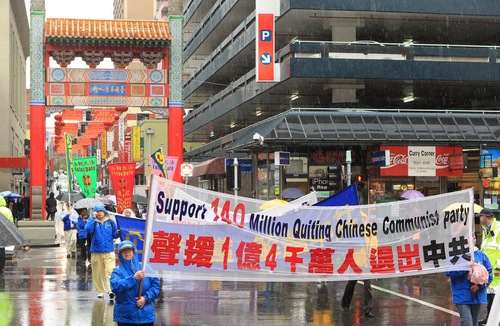 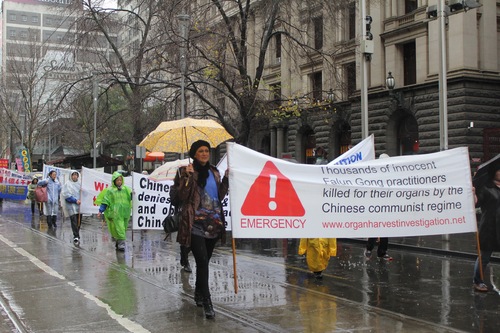 Practitioners march in Melbourne, Australia, to call for the end of the persecution of Falun Gong in China.

Officials and Activists Join the Rally

The rally included a musical performance titled “Coming for You,” which speaks of practitioners' compassion amidst the persecution, as well as speeches by notable Australian officials.

Mr. Luke Donnellan, Labor Party member of the Victorian Legislative Assembly; Mr. Peter Westmore, president of the National Civic Council; Mr. Gerard Flood, vice chairman of the Democratic Labor Party; Mr. Yuan Jie, president and editor-in-chief of Tiananmen Times and president of the Chinese Democracy School in Australia; Mr. Huiqiang Pan, director of the Victorian branch of the Australian Falun Dafa Association were among those who spoke at the rally. MP Adam Bandt of Melbourne sent a letter of support for the event. 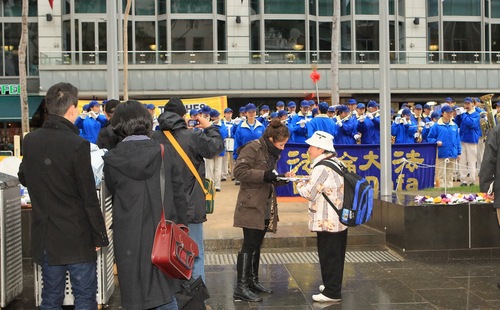 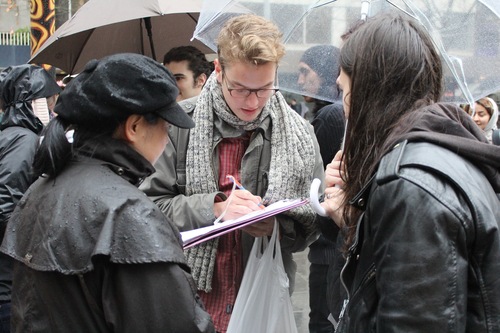 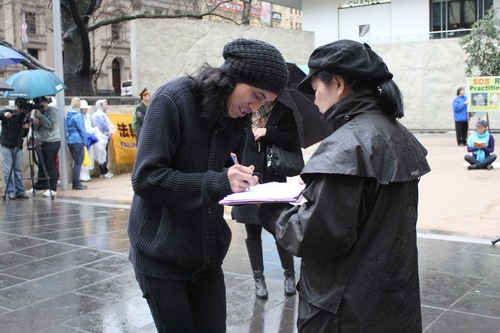 Victorian Legislative Assembly Member: “What You Have Done Is Very Good”

Mr. Luke Donnellan, Labor Party member of the Victorian Legislative Assembly, praised practitioners' efforts in clarifying the facts to peacefully protest the persecution and encouraged them to keep doing it.

“What you have done is very good,” he summed up. 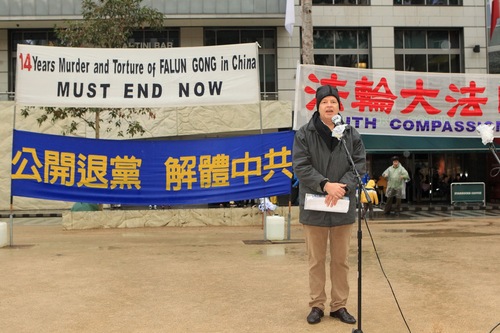 “I have a broad understanding of how the communist system works,” said Mr. Donnellan during his speech. “It takes away the dignity of people, and derides those who actually believe in something. And that's what Falun Gong is all about. It's about believing in something, believing in meditation, believing in being good to one another, and having that as a primary purpose in life. And of course, that competes with communism, which is totally not appropriate under a communist system.”

He added, “I understand that there's been extensive research work undertaken by the Canadian government and Canadian human rights officials in relation to organ harvesting murders and deaths of other people in China.”

President of National Civic Council: We Must “Demand an End to This Terrible Persecution”

Mr. Peter Westmore, president of the National Civic Council, expressed his admiration for Falun Gong practitioners for their perseverance. He had also joined them in the march to show his support. 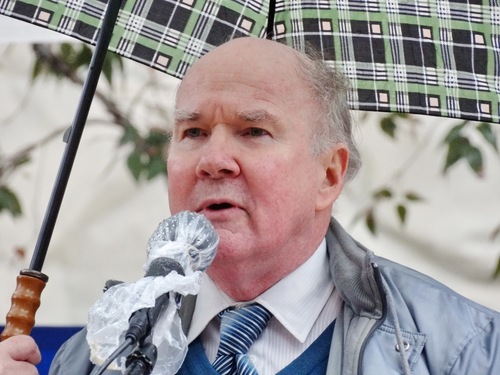 Mr. Peter Westmore, president of the National Civic Council, speaks at the rally.

“China is a country whose civilization goes back thousands of years. I have had occasion to visit China briefly and have found people in China to be polite, friendly, hard-working, family-centered, and extremely interested in what is happening in other parts of the world,” Mr. Westmore said in his speech.

He continued: “Yet the government of the People’s Republic of China continues to treat the people of China badly, persecuting those who have had the courage to call for freedom of speech, freedom of belief, and respect for human rights. Western NGOs such as Human Rights Without Frontiers and Human Rights Watch, as well as newspapers like the Epoch Times and the New Tang Dynasty TV network, have consistently documented the abuse of human rights in China.

“For a full explanation of the abuse of power by the Chinese Communist Party, I suggest that you obtain a copy of a detailed expose of the party, called Nine Commentaries on the Communist Party, available online.”

Mr. Westmore pointed out that China had signed and ratified the four UN Conventions on human rights.

“Equally, it is clear that imprisoned Falun Gong practitioners have been subject to the most appalling treatment, including indefinite detention without trial, being sent to forced labor camps, and most sensationally of all, execution – not for crimes they are alleged to have committed – but simply to steal their organs, like kidneys, livers, corneas, hearts, and lungs.

“The appalling practice of organ harvesting has been documented by two Canadian human rights lawyers, David Kilgour and David Matas, in their ground-breaking reports, which have been published in the book 'Bloody Harvest.'

“It is interesting that the Chinese regime has responded to these reports by introducing new laws which allegedly protect the rights of organ donors. But until there is a full accounting for the thousands of Falun Gong practitioners who have simply disappeared in China, and prosecution of those responsible, the laws are not worth the paper they are written on. Even worse, they can be designed to disguise the continued arrest, imprisonment, and killing of Falun Gong practitioners, which continues to the present day.

“For those of us who are not culturally or ethnically Chinese, there is an obligation to stand alongside our Chinese brothers and sisters, to demand an end to this terrible persecution.”

Mr. Gerard Flood, vice chairman of the Democratic Labor Party, said: “The members of the Democratic Labor Party offer you fraternal greetings and consolation support. … The world is now witnessing 14 years of the most vicious, the most monstrous atrocities, which fed the great power of money to evildoers who operate the worst institution in living memory. That institution is the Chinese Communist Party.

“David Kilgour, a leading authority on the Chinese Communist Party’s crimes against humanity, said in April: ‘Falun Gong is an innocent and peaceful group persecuted by the Communist Party. It is true that there is a large-scale harvesting of organs from practitioners for profit. The whole government of China is involved with the Chinese illegal transplantation system.’ I would call that transplantation system stealing and robbery of organs.” 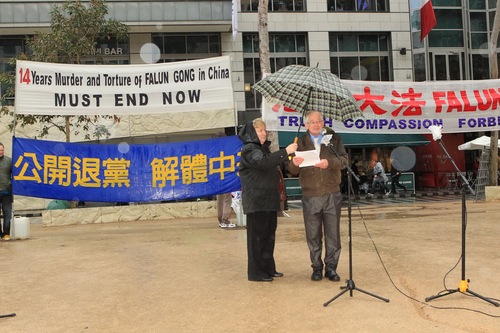 He continued: “We congratulate the Parliament of Australia for prohibiting the training of Chinese doctors who specialize in transplantation medicine. However, we deplore the failure of the Australian government to investigate the crimes against humanity of torture, murder, and forced human organ harvesting, which is really robbery.

“The word 'unscrupulous' means having no moral principles, having no honesty, and [being] not fair. We deplore the unscrupulous behaviors of general Australian news organizations and news staff for ignoring the most significant events of harvesting organs, murdering, and torture records.

Editor-in-Chief of Tiananmen Times: “It's Essential to Support Freedom of Belief” 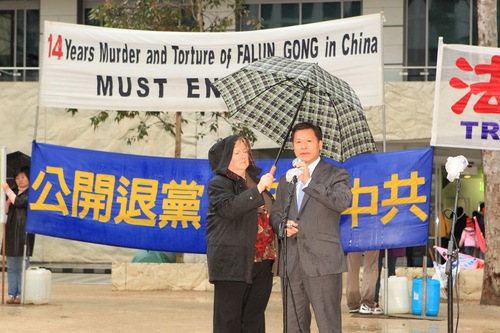 Mr. Jie Yuan, president and editor-in-chief of Tiananmen Times, speaks at the rally.

He added: “To safeguard Chinese morality, it is essential to support freedom of belief, like the belief of Truthfulness-Compassion-Forbearance. It is an urgent issue. Falun Gong practitioners pursue freedom of belief not only for their own practice, but for the morality and revival of Chinese people.”

In recent years, the Chinese communist regime's atrocious crime of organ harvesting from living Falun Gong practitioners was revealed to the Australian public, as well worldwide.

Mr. Pan, director of the Victorian branch of the Australian Falun Dafa Association, recalled: “Within a few months, Falun Gong practitioners collected 100,000 signatures and submitted them to the New South Wales Parliament. The signature campaign called for a new law to restrict Australian people from being involved in illegal organ transplantation. Among the signatures, 20,000 were collected on [one] city square.”

Mr. Pan expressed hope that the Australian public would continue to support Falun Gong and condemn the Chinese Communist Party's crimes against humanity.