(Minghui.org) When I go out to tell people about Falun Dafa, I often come across individuals who tell me that they have seen many people practicing Falun Dafa in Japan, France, the USA, Hong Kong, Taiwan, etc. Some say that it’s popular in India and want to know more about the practice in our city, Hyderabad. Schoolchildren, police officers, and others identify us in public places as Falun Dafa practitioners. Some also know that Falun Dafa has been unlawfully banned in China by the Chinese Communist Party.

Once when I was at a public meeting distributing fliers, I happened to meet a renowned professor. He told me that he visits China often to give lectures and that many professors had confessed to him in private that Falun Gong was once very popular in China but was still banned by the Chinese Communist Party, which is persecuting its own people. I was happy that he knew the truth about our practice. Sometimes I come across Chinese students, who gladly accept the fliers.

Once when I was driving my vehicle with “Falun Dafa is good” written in Chinese on it, two Chinese girls who happened to see it were really thrilled. That made me happy, too. Few Chinese students refuse to accept the fliers. I humbly consider all these events as encouragement from Master to meet as many people as possible so that I can clarify the truth to them.

Finding Opportunities to Cultivate in All Situations

When I was handing out fliers at another public meeting, two people mistook me for someone trying to convert them to a specific religion. They did not give me a chance to speak and cursed me in high pitched voices on a busy street. They even threatened me with dire consequences. One even took some fliers and left the scene. I was not at all disturbed. After they left, I distributed the remaining fliers and recalled what our revered Master said in Zhuan Falun:

"Your xinxing cultivation has already made progress if, for instance, when someone swears at you among everyday people, you do not say a word and feel very calm; or when someone throws a fist at you, you do not say a word and let it go with a smile. Your xinxing level is already very high. So as a practitioner, what should you obtain? Aren’t you going to obtain gong? When your xinxing is upgraded, your gong will increase. One’s gong level is as high as one’s xinxing level, and this is an absolute truth." (Lecture One)

The Andhra Pradesh Special Police (APSP) of Hyderabad is a renowned force designed to combat insurgency. They provide security for elections within the state or within any state in India. When I went to the office to meet with the APSP superintendent, I had to wait for more than an hour and a half. I understood that this was also part of my cultivation. I told him and other officials in his office about our practice, and he gave me permission to introduce the Fa and teach the exercises to nearly 300 of his force.

We explained the practice, talked about the persecution in China, and distributed fliers to all of the police officers. They were all positive about our practice. Many asked why it was banned when it promotes Truthfulness-Compassion-Forbearance. I replied that it was because of its popularity, and told them that the Chinese Communist Party is spreading lies about the practice and persecuting its own citizens. Even so, Dafa has been embraced in 114 countries around the world. 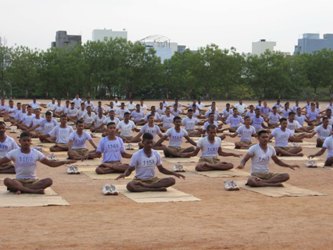 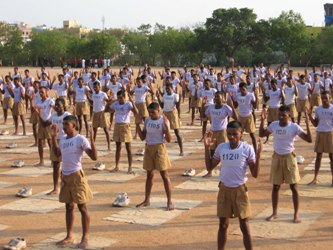 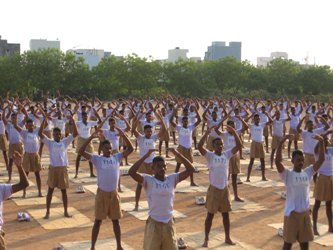 Many thanks to our Master.