Torture, Degradation and Rape – Evil Acts Committed in the Persecution of Falun Gong

(Minghui.org) On May 1, 2013, the documentary film “Above the Ghosts' Heads: The Women of Masanjia Labour Camp” premiered in Hong Kong and Taiwan. The film exposes the deplorable conditions in Masanjia Forced Labor Camp, including the widespread use of torture. (The film can be found on Youtube by searching the title shown above)

Director Du Bin exposes this brutal torture and the other crimes against humanity committed at the notorious Masanjia Forced Labor Camp through first hand accounts delivered by 12 victims. The film exposes evidence that has long been covered up by the Chinese Communist Party (CCP). (Editor's Note: Chinese authorities arrested Du Bin in June 2013 and he is currently being held in detention. His film is banned in Mainland China. Reporters Without Borders [RSF] is calling for his release.)

The CCP employs more than 40 methods of brutal torture to persecute Falun Gong practitioners. Many of these same tortures were used in the cases of the 12 women interviewed in the film. Heinous crimes against humanity occur at every moment in China.

The 12 women interviewed in the film were arrested for petitioning the central government for justice. None of those interviewed practice Falun Gong, but the women explain that indeed Falun Gong practitioners are among those tortured and most brutally treated at Masanjia. This has been well known to readers of Minghui.org over the years, as numerous reports have been published detailing the evildoings at Masanjia.

One of the women, Liu Hua, explained, “Masanjia Women's Forced Labor Camp tortured petitioners like us who stood up for our rights and beliefs, as did Falun Gong practitioners. They used electric batons to beat and shock our breasts and genitals. They inserted electric batons into the genitals to shock, or poured hot pepper water in there to torture us, or used toothbrushes to poke our private area and rotated the toothbrushes inside. They used vaginal dilators to expand our mouth and performed force-feeding to humiliate us...”

Horrific as the conditions described in the film are, the treatment dished out to Falun Gong practitioners is even worse.

This has been clearly documented over the last decade by numerous reports from reliable sources in China published on the Minghui website.

The next day, they forced Wang Yunjie to sit with her legs in a full lotus position and then tied her legs and head together with cloth, pulling her tightly into the shape of a ball. They handcuffed her from the back and hung her up in the air for seven hours. Afterwards, Wang Yunjie could not sit, stand, or walk normally.

In November 2003, when Masanjia officials thought Wang Yunjie would die in less than two months, they hurriedly instructed her family to pick her up. After returning home, after the tortures she had experienced, her breast ulcer problems became worse and worse. In July 2006, Wang Yunjie passed away.

Wang Yunjie's breasts began to fester due to shocks from electric batons.

Another example: the horrors faced by Gao Rongrong

In the afternoon of May 7, 2004, Tang Yubao, the assistant captain of the No. 2 team and Jiang Zhaohua, the captain from the Academy, tortured Gao Rongrong for 6 to 7 hours with electric baton shocks.

Gao Rongrong's face was severely damaged and her face was full of blisters. After the torture, her internal organs failed to function. She became skinny and was dying. Photos of Gao Rongrong's disfigured face were posted on the Internet and shocked the world.

Unfortunately, in March 2005, Gao Rongrong was arrested again and died on June 16 while she was detained in Masanjia. 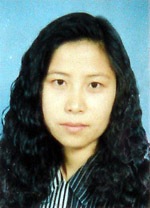 Gao Rongrong, before the persecution

Gao Rongrong, after being disfigured by electric shock torture (photo taken 10 days after being injured)

Such behavior falls far below the baseline of human morality. It is demonic behavior. Brutal torture has led to the death, disability and dismemberment of many Falun Gong practitioners.

The shocking treatment experienced by the late Ms. Wang Yuhuan

Falun Gong practitioner Wang Yuhuan, was detained by Changchun police over ten times and was sent to a forced labor camp 9 times.

On March 11, 2002, Wang Yuhuan was arrested by police from the No. 1 department of Changchun Police Station. On the night of March 12, she was tied up by Gao Peng and Zhang Heng and put in the trunk and taken to the Jingyuetan Execution Room.

Wang Yuhuan was locked into a tiger bench. Every five minutes police would torture her and tied her arms and then moved her forward and backward. Her bones became dislocated and made Wang Yuhuan almost pass out due to piercing pain. She sweat and shed tears.

They bent her head toward her legs. Several times, her neck was almost broken. Each second it was hard to breathe. Her foot was pulled to cause terrible pain. Severe pain made Wang Yuhuan's whole body tremble.

Sweat, tears and blood flowing from wounds soaked her hair and clothing. Unbearable pain and suffering made her lose consciousness again and again. Guards poured cold water and then hot water on her to wake her up. Hot water irritated her wounds even more.

Wang Yuhuan said afterwards, “I couldn't bear the pain. I wished they would have shot me dead.”

Wang Yuhuan fainted after being choked with smoke several times during a four hour stint on a Tiger Bench (a cruel instrument of torture) . To revive her, she was doused with icy cold water. The guards burned her eyes with lit cigarettes and knocked two of her front teeth out. Her face was beaten until swollen, black and purple. The torture even left her deaf in both ears!

Wang Yuhuan was taken from her cell to be tortured 3 times over a 17 day period. The torture got worse and worse each time.

After one torture session, guards put a very thick sweater and pants on her to prevent people from seeing her bleeding body. However blood still penetrated her thick clothes. The guards added another thick layer of clothes. But still, blood soaked through.

After such severe torture, Wang Yuhuan was left with several injuries. She was sent to the prison hospital, but subjected to further persecution. As soon as she was in the hospital, they tied her up on a bed and gave her some unknown injection. After the injection both of her legs turned numb (no feeling even of a pinch). Her feet were cold all the time. She also suffered sexual humiliations.

On May 9, 2007, Wang Yuhuan was arrested again. That same night she was interrogated by the national security team in the Jingyuetan Execution Room. When Wang Yuhuan came out, her whole body was black and blue. Her internal organs were damaged. She had difficulty eating food and could not walk by herself.

On September 24, 2007, she passed away in Changchun Public Security Hospital at age 52.

Yu Xiuling, a Falun Gong practitioner from Chaoyang County, Liaoning Province, was 32 years old. On September 14, 2001, she was arrested by police at her home and sent to the Shijiazi Detention Center.

On September 19, around 8 am, she was taken to Lingcheng Branch Police Station and was interrogated and tortured for 13 hours. Yu Xiuling was brutally beaten to the last breath. Someone said they should send her to the hospital, but another said, “Don't send her to the hospital. If they cannot rescue her, we will not be able to explain what happened to her.” In order to cover up their crime, Huang and Sun threw Yu Xiuling to her death from a window on the 4th floor. They hurriedly cremated her body that same night, anxious to destroy evidence of their misdeeds.

Before the cremation, police notified Yu Xiuling's husband Feng Dianxiang, and claimed that she committed suicide by jumping off a building. When the husband arrived, guards Huang, Sun and others threatened him by saying, “You can file a lawsuit wherever you want. We have orders from the above. No measure is considered too extreme in dealing with Falun Gong practitioners!”

Wu Jingxia from Weifang, Shandong Province, was beaten to death within three days. 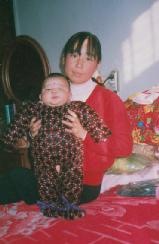 Wu Jingxia and her baby

Wu Jingxia is from Weifang, Shangdong province. She was arrested by police while she was distributing truth-clarification materials on the morning of January 17, 2002. She was sent to Chanyeyuan Police Station and handcuffed to a heater in the front office. The next day she was sent to Kuiwen District Detention Center of Weifang City. Two days later, she was dead at the hands of the authorities. She was only 29 years old.

Her whole body was black and blue. Her face was covered with toilet paper. Blood ran from her mouth. Her hip bone was broken. A red mark showed on her neck.

Wu Jingxia was still a nursing mother and her baby had not been breast fed for three days. Her breasts were originally filled with milk and felt painful and uncomfortable. Police picked the most painful spot of her body and shocked her four to five times. Her breasts were covered with small nails and paper.

Her family wrote an appeal letter and sent it to Weifang City Police Station. The person in charge said, “You should win this case. However, if we let you win this case today, we will lose our jobs tomorrow and have no place to live.”

Wu Jingxia passed away. Her family's telephone was monitored and even they lost their freedom.

We have only presented a few cases in this article. Atrocities by CCP personnel happen every day on a large scale in places like forced labor camps, jails, and brainwashing centers. These people's evil deeds are inhuman, and surely some day soon they will meet with the justice they deserve.