(Minghui.org) At Belmore Park in Sydney, Australia, Falun Gong practitioners held a gathering on June 29 to raise awareness of the history of brutality by the Chinese Communist Party (CCP). July 1 st would mark 92 years since the establishment of the Party, and attendees reviewed the vicious acts the regime has committed against the Chinese people, especially that of organ harvesting from living Falun Gong practitioners, detained in labor camps and prisons for their belief.

This event echoed the movement in Mainland China, where over 140 million people have declared their intentions to quit the Party and its affiliated Youth League and Young Pioneers. 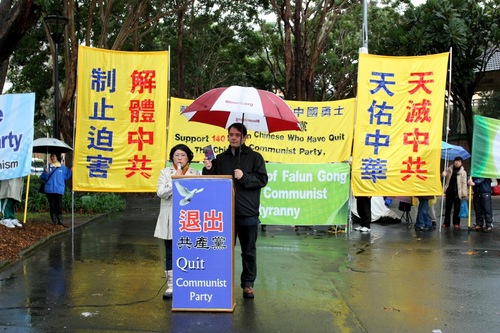 Gathering at the Belmore Park

Many people came to support this event despite the rain. Passersby stopped to get more information and to sign a petition, condemning the CCP.

In China, state-run media broadcast propaganda and falsehoods about the practice of Falun Gong, banned in 1999 by the regime. However, beyond China's borders Chinese citizens have access to uncensored information. After hearing about the real situation, numerous Chinese in Sydney agreed to join the momentum and quit the Party.

The Regime Has Ruined China Culturally and Materially

Li Yuanhua started his speech by congratulating the Chinese citizens who have already announced their withdrawal from the Communist Party. He pointed out that the choice these people have made not only benefits themselves, but also helps others. Li emphasized that this is because once the regime falls, everyone will have a better future.

“The CCP has been in power for more than 60 years,” he said. “During this period of time, it has not only ruined Mainland Chinese materially, but it has also destroyed China culturally. For example, when the CCP launched the [Great Leap Forward] campaign to blindly boost steel production in late 1950s, many forests vanished.

“The damage to Chinese culture is also severe and broad. By attacking traditional Confucianism and labeling Buddhism, as well as Taoism, as superstitious, the regime has not allowed people to have any beliefs. As a result, people no longer believe that good is rewarded with good, and evil is met with evil. This has led to the degeneration of moral values.”

By utilizing its power, the CCP has exhausted all resources and state machinery to systematically attack Falun Gong practitioners, and any other citizens with beliefs different from the communist ideology. Harvesting organs from living Falun Gong practitioners, simply because of their belief in Truthfulness-Compassion-Forbearance, is a “disgusting form of evil which, despite all the depravities humanity has seen, was new to this planet.” (Matas and Kilgour, Bloody Harvest ) Such actions are the result of a vicious, state-controlled form of terrorism.

The CCP Has Left China in Disaster

Democracy activist Pan Qing briefly reviewed the uncertainty inside of China during the past few decades, and he attributed it to the CCP. As a result of the vicious acts committed by the regime, the Chinese people have nearly lost the natural environment—from clean water to clean air—that is necessary for their survival. Instead, they face polluted water, toxic air, poisonous food, and rapid desertification. The existence of the Chinese people is in danger. And, Pan noted, all these problems can be traced back to the irrational rule of the CCP.

“The brutality of the regime has caused the deaths of over 80 million people,” he said. “Furthermore, many people have been jailed simply because they pursue freedom or believe in Truthfulness-Compassion-Forbearance. They are mistreated and tortured, and even become victims of live organ harvesting. Should we allow this kind of viciousness to continue, or do something to stop it?”

Quitting the CCP involves everyone, Pan added, including ourselves and our relatives. “If you want your children to live in a nation without the CCP, a nation that has hope, you have to quit the Party,” he said. “This is the first step we have to take. It is also the most critical one.”

Lies and Brutality Will Inevitably End

Sun Baoqiang agreed with the other speakers. She said that the CCP's history can be summarized as lies and brutality. “By undermining traditional values and beliefs, the CCP has ruined ethics and the Chinese social structure,” she said. “When people no longer respect each other, no longer respect mother nature, moral degeneration and a collapsed ecosystem will follow. The entire nation will be taken to the brink of destruction. The CCP is responsible for the catastrophe and, once people wake up, its days are numbered.”

A gathering that supports 140 million people quitting the Party in China, Pan Qing said, indicates that the inevitable day of the Party's collapse is approaching.