(Minghui.org) The methods of torture the Chinese Communist Party (CCP) uses on Falun Gong practitioners and others in its prisons, labor camps, and detention centers are brutal. Survivors recount their horrific experiences in written form, paintings, drawings, and photos so that the criminal behavior of the CCP is known worldwide. 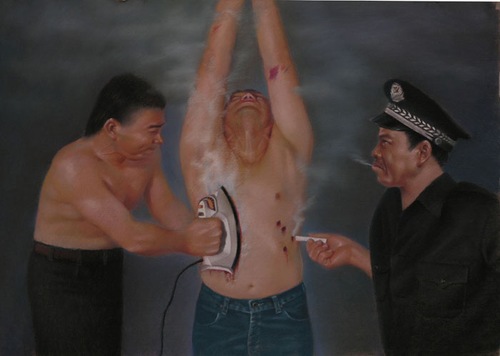 Reenactment photos with real people are the most effective way to get across the truth about the persecution, so the CCP is very unhappy when such photos are made public. Recently, it has gone after those who have participated in creating such photos. It has also marshaled the state-controlled media to discredit the reenactment photos. The CCP fears the exposure.

On June 4, 2013, the Xinhua news website, a CCP-controlled media, reported the arrests of Falun Gong practitioners who demonstrated torture methods in reenactment photos. The website labeled the photos “fabrications.” The Minghui website had specifically labeled such photos “illustrations,” “demonstrations,” or "reenactments."

It is obvious that the CCP is retaliating against its victims, who are trying to show the world the truth. The Party is trying to cover up the truth and confuse the public. The article was published on June 4 and is reminiscent of the Tiananmen Square massacre the CCP has been denying for over a decade. This amoral regime is accustomed to denying its crimes.

Over the past 14 years in China, the police in prisons, labor camps, detention centers, and brainwashing centers have done all they could think of to torture Falun Gong practitioners. The goal is to force them to abandon their belief, to “transform” them. Enticed by the promise of bonuses tied to a “transformation rate,” the CCP police have brutally tortured innocent people who practice Truth-Compassion-Forbearance and have been the driving force behind thousands of deaths across the country. 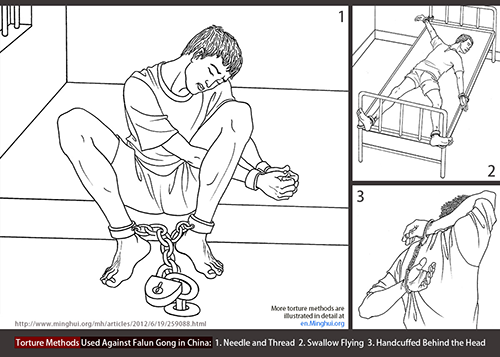 A picture is worth a thousand words

The names the CCP uses to describe the forms of torture it uses are many, such as “tying with ropes,” “big hang-up,” “ground anchor,” “straightjacket,” and so on. Without real people demonstrating these brutal tactics, anyone who hasn't personally experienced such torture or seen someone else tortured like that won't be able to understand or imagine what those terms mean.

The Minghui website has published many reenactment photos with real people demonstrating the torture methods recalled by the victims. They are clearly labeled as illustrations or reenactments photos.

Falun Gong practitioners outside of China have also held anti-torture exhibits to demonstrate the torture methods and lay bare the violence and brutality of the CCP. What's shown in such exhibits or torture reenactment photos is simply a glimpse. The reality is far uglier than any photo or exhibit could convey.

The purpose of the torture reenactment photos is not just to seek justice for the practitioners in China. Under the CCP's tyranny, any innocent Chinese citizen can be arrested, thrown into a labor camp or detention center, and be tortured.

Making sure everyone knows that such torture is taking place with these photos is the first step to ending it. It is an effective approach to protecting citizens' rights and their safety. Falun Gong practitioners who make such photos are exercising their basic rights and are helping to protect all Chinese citizens.

In today's China, corruption, the forceful demolition of homes, police cooperating with crime rings, petitioners being arrested, and the rape of young girls are simply "par for the course" with the CCP. Where can Chinese citizens find justice?

Falun Gong practitioners are exposing the persecution using peaceful and rational means. Such efforts include making torture reenactment pictures. They are protecting Chinese people's rights at the risk of their own safety. Their morality and courage are admirable. Their shocking experiences in labor camps and their efforts to make those experiences public deserve our attention. Let us help rescue those good people who dare to speak the truth and who are persecuted because of it!