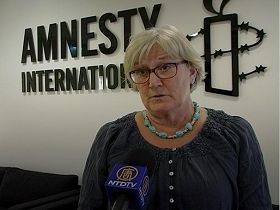 In the gathering, Western and Chinese Falun Gong practitioners held up banners reading “Falun Dafa is Good!” and “Stop Persecuting Falun Gong!” opposite the Chinese Embassy. They demonstrated the Falun Gong exercises.

Motorists passing by slowed down and honked their horns to show their support. Pedestrians also gave a thumbs up to express their appreciation for the peaceful protest.

Witnesses to the Persecution

A Chinese couple, Mr. Tian and Ms. Huang, Falun Gong practitioners who left Mainland China a year ago to escape the persecution, spoke at the gathering and told of their personal experiences in China.

Mr. Tien said, “When my best friend was released from the forced labor camp, he suffered from stomach bleeding and tuberculosis as a result of the persecution. He was very healthy before. My friend's mother-in-law and I used to practice the Falun Gong exercises together. After she was illegally detained, she was severely beaten, which led to internal bleeding. She died a few days after being released. These are all bloody facts that no one can deny.”

Ms. Huang, Mr. Tien's wife, said, “Falun Gong practitioners in China all know of the existence of Masanjia Forced Labor Camp. We are all very frightened when the name is mentioned. That place is the most evil place in persecuting Falun Gong practitioners. In China, every minute we face the danger of being arrested and persecuted. Today in this free society, we want to express our heartfelt voice: Stop persecuting Falun Gong!”

Amnesty International Sweden has recently submitted a report to the United Nations, urging the Chinese regime to immediately end the re-education through forced labor system that violates China's own constitution.

At the gathering, Amnesty International spokesperson Elisabeth Lofgren said in an interview, “We have been appealing to immediately close these labor camps for a long time because this system is absolutely illegal. There are many Falun Gong practitioners being detained there. A very large number of people being sent to labor camps have no reason to be detained.”

Ms. Lofgren also said, “We are very concerned with the exposure by the Chinese Mainland media about Masanjia Forced Labor Camp. We also learned that in this labor camp, extremely brutal torture, mental and physical punishment are very common. Especially against Falun Gong practitioners, if they don't give up their belief, it is very likely they will suffer such treatment.”

Ms. Lofgren hopes that more people in China (judges, lawyers, and others in the judicial system) will speak out, because this re-education through the labor system should not exist at all. The forced labor system places itself above the law. She believes that Amnesty International and other international organizations and governments should also apply pressure. She said that the labor camps should be closed because they should not exist in the first place.