Falun Gong practitioners set up banners worded, “Stop the CCP Harvesting Organs from Living Falun Gong Practitioners”, “Dismantle the CCP, Stop the Persecution of Falun Gong”, and “Support the 135 Million Brave Chinese People Who Have Quit the CCP” as well as display boards clarifying the truth about the persecution of Falun Gong. A number of Chinese people publicly announced their withdrawal from the Party. Hundreds of Sydney residents and tourists signed a petition urging Australian legislators to establish a law to stop live organ harvesting in China. 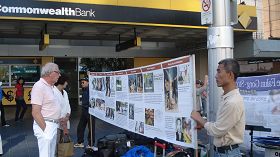 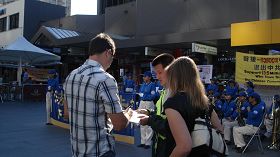 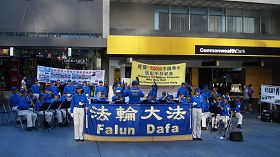 Chatswood is regarded as the best Chinese Community in Sydney as well as an important commercial center in north Sydney. Increasingly, there are more and more Chinese people moving to this area.

The Divine Land Marching Band has won numerous awards and proclamations in community events. During the day, the band performed at a street plaza. Some Chinese people took a lot of photos and video footage of the performances. Many passersby signed a petition to end organ harvesting.

During the day, about 200 Chinese people quit the CCP, and more than 400 local residents and tourists had signed the petition.