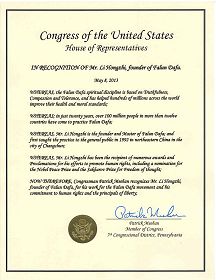 Congress of the United States House of Representatives

In Recognition of Mr. Hongzhi, founder of Falun Dafa May 8, 2013

Whereas , the Falun Dafa spiritual discipline is based on Truthfulness, Compassion and Tolerance, and helped hundreds of millions across the world improve their health and moral standards;

Whereas , in just twenty years, over 100 million people in more than 100 countries have come to practice Falun Dafa;

Whereas , Mr. Li Hongzhi has been the recipient of numerous awards and proclamations for his efforts to promote human rights, including a nomination for the Nobel peace Prize and the Sakharov Prize for freedom of thought;

Now Therefore, Congressman Patrick Meehan recognizes Mr. Li Hongzhi, founder of Falun Dafa, for his work for the Falun Dafa movement and his commitment to human rights and the principles of liberty. 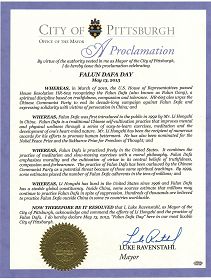 City of Pittsburgh Office of the Mayor

By virtue of the authority vested in me as Mayor of the Pittsburgh, I do hereby issue this proclamation celebrating “Falun Dafa Day” May 13, 2013

Whereas , in March of 2010, the U.S. House of Representatives passed House Resolution HR-605 recognizing the Falun Dafa (also known as Falun Gong ), a spiritual discipline based on truthfulness, compassion, and tolerance. HR-605 also urges the Chinese Communist Party to end its decade-long campaign against Falun Dafa and expressing solidarity with victims of persecution in China; and

Whereas , Falun Dafa was first introduced to the public in 1992 by Mr. Li Hongzhi in China. Falun Dafa is a traditional Chinese self-cultivation practice that improves mental and physical wellness through a series of easy-to-learn exercises, meditation and the development of one’s heart-mind nature. Mr. Li Hongzhi has been the recipient of numerous awards for his efforts to promote human betterment. He has also been nominated for the Nobel Peace Prize and the Sakharov Prize for Freedom of Thought; and

Whereas , Falun Dafa is practiced freely in the United States. It combines the practice of meditation and slow-moving exercises with a moral philosophy. Falun Dafa emphasizes morality and the cultivation of virtue in its central beliefs of truthfulness, compassion and forbearance. The practice of Falun Dafa has been outlawed by the Chinese Communist Party as a potential threat because of those same spiritual teachings. By 1999, some estimates placed the number of Falun Dafa adherents in the tens of millions; and

Now Therefore be it resolved that I, Luke Ravenstahl, as Mayor of the City of Pittsburgh, acknowledge and commend the efforts of Li Hongzhi and the practice of Falun Dafa. I do hereby declare May 13, 2013, “Falun Dafa Day” here in our most livable City of Pittsburgh. 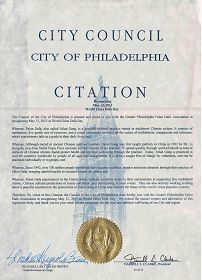 The council of the City of Philadelphia is pleased and proud to join with the Greater Philadelphia Falun Dafa Association in recognizing May 13, 2013 as World Falun Dafa Day

Whereas , Falun Dafa, also called Falun Gong, is a peaceful spiritual practice rooted in traditional Chinese culture. It consists of meditation, five gentle sets of exercises, and a moral philosophy centered on the values of truthfulness, compassion and tolerance, which practitioners take as a guide to their daily lives; and

Whereas , although rooted in ancient Chinese spiritual tradition, Falun Gong was first taught publicly in China in 1992 by Mr. Li Hongzhi, four-time Nobel Peace Prize nominee and the founder of the practice. It spread quickly through world-of-mouth as tens of millions of Chinese citizens found greater health and spiritual well-being through the practice. Today, Falun Gong is practiced in over 80 countries worldwide by people of all ages and backgrounds. It is always taught free of charge by volunteers, and can be practiced individually or in groups; and

Whereas , since 1992, over 100 million people worldwide have become healthier, happier and more altruistic through their practice of Falun Dafa, bringing untold benefits to societies around the globe; and

Whereas , Falun Dafa practitioners in the United States dedicate countless hours to their communities in organizing free meditation classes, Chinese cultural productions of music and dance; and participate in local events. They are also actively working to bring about a peaceful resolution to the persecution of Falun Gong in China and improve the future of the world’s most populous country.

Therefore , By virtue of this Citation, the council of the City of Philadelphia does hereby join with the Greater Philadelphia Falun Dafa Association in recognizing May 13, 2013 as world Falun Dafa Day. We extend the sincere respect and admiration of this legislative body, and thank you for your work toward enhancing the physical and spiritual well-being of our City and region.