(Minghui.org) Today's news from China includes incidents of persecution that took place in four cities or counties in four provinces. In this report, four Falun Gong practitioners were subjected to mistreatment during their detention, and at least three practitioners were illegally arrested. 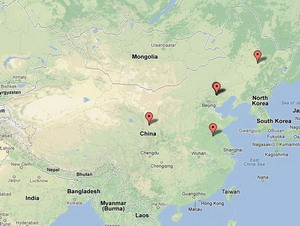 Ms. Meng Hong, 73 years old, was arrested at home by officers from the Nangang District Police Department Precinct in Harbin City on March 23, 2013. She is being held in the Heilongjiang Women's Prison. Guards said that they would first spend five days trying to “transform” her, and that visits would not be granted to anyone before she was “transformed.”

Mr. Zhang Jingtian and his wife Ms. Ma Xiurong from Chengde City were arrested at home by officers from the Domestic Security Division on the afternoon of March 27, 2013. Their computer, printer and other items were confiscated.

Mr. Zuo Shougang has been persecuted for a long time. As a result of enduring severe persecution, he will be released on medical parole in a few days. Only agents from the the Justice Office can pick him up on the release day.

Mr. Chen Deguang and his wife Ms. Sheng Xuemei were arrested two years ago for distributing Shen Yun DVDs to the public. The Honggu District Court in Lanzhou City handed in their case to the Lanzhou City Intermediate Court, which rejected it on both occasions because the case lacked sufficient evidence. The Honggu District Court authorities then attempted to open a session and sentence the couple on March 22, 2013. The notice was given to the family only one day ahead of time and the couple's lawyer wasn't able to arrive on time as a result. Only after determined intervention from the family, did the court authorities agree to postpone the court session.

Mr. Meng Qingquan from Jiawang District, Xuzhou City was arrested by railway police officers on a train from Nanjing City to Xuzhou City on March 27, 2013. His cell phone was confiscated. Agents from the Xuzhou Railway Police, Jiawang Police Department Precinct and Local Community Office ransacked Mr. Meng's home that afternoon. No family members were at home when they began ransacking the house, however they arrived in the midst of it. The agents confiscated a laptop computer, informational materials about Falun Gong and other items.