Kaohsiung, Taiwan: Persevering in Clarifying the Truth with the Same Spirit as the April 25 Appeal (Photos) 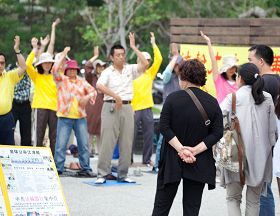 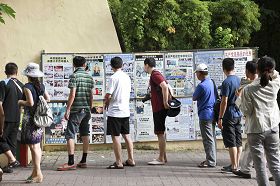 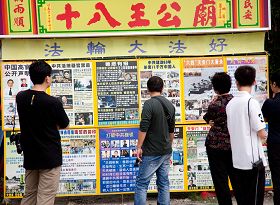 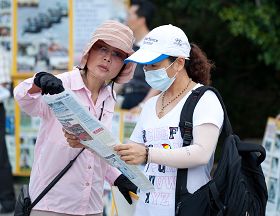 Xizi Bay in Taiwan is located to the north of Kaohsiung harbor, by the Taiwan Straights with a beautiful backdrop of Mt. Longevity. It is a favorite spot for Mainland Chinese tourists, with many busloads of them visiting for sightseeing every day. They often see Falun Gong practitioners demonstrating the exercises and displaying information about the persecution by the Communist regime. Falun Gong practitioners have been doing this for years and it has become an important attraction for tourists who come to visit Taiwan.

Mainland Chinese tourists can see the peacefulness of Falun Gong practitioners, which is totally different from the lies told by the CCP in China. After learning the facts, they quit the CCP one after another, taking a stance for justice. Many Falun Gong practitioners volunteer their time to come here to clarify the facts to the tourists every day and help them quit the CCP.

Ms. Cai Xiuzhi has been practicing Falun Gong for over ten years. She works in her own shop in the morning and closes it at lunch time. The she rides her motorbike with informational materials to Xizi Bay to clarify the facts to people.

She has been doing this day after day for over ten years, regardless of the weather. She said, “It is about a 40-kilometer round trip from my place to Xizi Bay, and it takes me about two hours in total. I get back to the shop at around 6:00 p.m. to get things ready for business the next day. It is usually after 9:00 p.m. by the time I get home.” Ms. Cai believes it is well worth the effort to help the people from Mainland China. She said, “Very often, a volunteer worker is able to help dozens of tourists from Mainland China quit the CCP and its affiliated organizations within a couple of hours.”

CCP Member for Over 30 Years Quits the Party

Ms. Cai Xiuzhi said that once she saw a man in his sixties sitting there enjoying the sea view. She went over and said, “May I ask if you have joined the CCP or its affiliated organizations before? Let me help you quit the CCP for your own safety, will you?” The man said he had been a CCP member for over 30 years and he would never quit the CCP even if he died!

Ms. Cai said, “No problem. It's karmic destiny that we meet today. I'm only being responsible to tell you the facts. It's up to you if you quit or not.” Even though the man said he would not quit the CCP, he looked kind and was willing to listen to Ms. Cai, and asked Ms. Cai why she practiced Falun Gong.

Ms. Cai told him, “I was weak and often sick when I was young and doctors and medicine could not help me get better, but I regained health from practicing Falun Gong, and that's why I have the opportunity to help you quit the CCP so that you can have a safe and bright future.” She also told him about the persecution of Falun Gong and the CCP's crime of live organ harvesting and said, “The CCP has done so many evil things and it will definitely meet with retribution. Only by quitting the CCP can you truly ensure safety.”

They talked for about half an hour. The elderly man thought about it deeply and said, “OK! I quit.”

Life Is More Important than Money

A tourist from Mainland China said to Ms. Cai, “The Chinese Communist Party gives me money. I will quit the party if you give me money too!” Ms Cai told him, “Life is more important than money. Without life, what's the use of money? Besides, your money is not given to you by the CCP, it is from your own efforts. Your life will be blessed if you quit the CCP.”

She went on to say, “80 million Chinese people have lost their lives because of the CCP. It also persecutes people with religious beliefs, and persecutes Falun Gong and even harvests organs of live Falun Gong practitioners. Did you know this?”

“Good will be rewarded and evil will receive retribution. The CCP will be disintegrated. This is a mandate of Heaven. Each CCP member is part of it, so only by quitting it quickly can one truly be safe. Life is precious. When calamities come there will be no escape, whether you are rich or poor! You decide your own future!”

After hearing all this, the man finally said, “All right. I quit. Falun Dafa is good! Zhen-Shan-Ren is good!”

CCP Secretary Threatens a Practitioner, But Finally Agrees to Quit the Party

One tourist was a CCP secretary at his workplace. When Ms Cai told him about quitting the CCP for his own safety, he rudely grabbed from Ms. Cai' s hand the name list of people who had quit the CCP and threatened to throw it into the sea.

Ms. Cai said to him solemnly, “You must not behave this way. We are volunteers and we come here to help you because you are all kind people, and only by quitting the CCP can you truly have a safe future. You only need to quit the CCP in your heart with a kind thought, and this will not affect your job.”

In the end the man understood. He returned the name list to Ms. Cai, nodded his head with a smile and said, “Please help me quit from [the CCP] too.”

Retired Officials Quit the CCP, the Youth League and the Young Pioneers

Ms. Cai recalled that once she saw two people walking slowly. So she walked with them and asked, “Are you two retired?” One of them said, “I have long retired.” Ms. Cai said, “Many people quit all the CCP organizations after they retired!” The other said to her, “We can't quit. If we do, we will be killed when we get back.”

Ms. Cai said, “There is nothing to be afraid of. The CCP only has more than 70 million members, but there are 1.3 billion Chinese people. The power of 1.3 billion united people is huge.” They stopped and said to Ms. Cai with a smile, “Yes, yes you are right! 1.3 billion people are powerful.” Ms. Cai told them that they must quit the CCP and all its affiliated organizations and showed them a number of aliases for them to choose from. They each chose an alias and declared their resignation from the CCP.

For the last 14 years, many Falun Gong practitioners in Taiwan like Ms. Cai have continuously clarified the truth to people while peacefully resisting the persecution. They make use of every opportunity to clarify the facts to save people with perseverance. Practitioners have witnessed a change in the situation over the years, with more and more Chinese people showing their support for Falun Gong.