A lady passed by the event and learned about the persecution. She said: "What is happening in China is really shocking and I cannot imagine, in this authoritarian state, how one person can be so brutally tortured by another person, even animals would not do that. I wish you good luck in this battle of good and evil." Then she signed the petition. 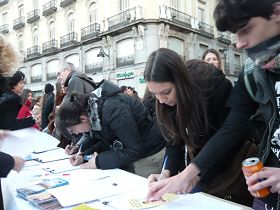 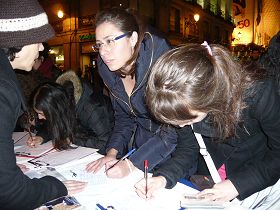 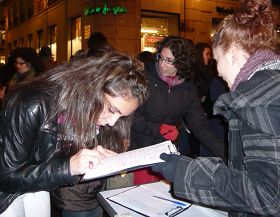 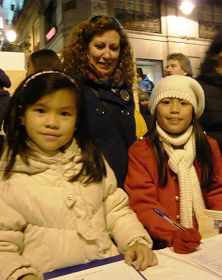 Many passers-by learned about the persecution of Falun Gong and signed the petition. A French person who spoke Spanish expressed that it was very good to expose the communist regime's evil deeds by displaying banners and images, and this could help people understand the true picture.

Several Chinese girls who grew up in Spain signed their names on the petition. They left, but after a while, the girls came back to the desk again because they wanted some blank petition forms for the Chinese people who lived close to them. They wanted to tell those people about the persecution in China, and help more Chinese to understand Falun Gong and sign their names to support Falun Gong. Before leaving, one of them said: “I hope our signatures can help end the persecution as soon as possible.” 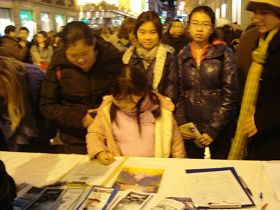 A group of young Spanish people took the leaflets and said that they knew of the evil nature of the Communist Party of China, but had not heard about the persecution of Falun Gong. After learning the facts, they signed their names to support Falun Gong.

Some people already knew about the persecution and had already signed the petition in other activities organized by Falun Gong practitioners. Some of them asked if they could sign again. One senior citizen who came to sign her name said, "The force of justice is becoming stronger and stronger, and the evil is becoming weaker and weaker. The more signatures, the sooner the persecution will stop. "