(Minghui.org) The opening ceremony of the Art of Zhen, Shan, Ren International Exhibition was held at Saint Brigid’s Centre for the Arts located at the Byward Market in Ottawa, Canada, on the evening of February 5, 2013. Despite the cold winter weather, many people were attracted to the exhibition, which would remain open until February 10.

Attendees of the ceremony carefully studied the artwork and sang high praise for the outstanding skill of the artists and their inspiring and touching artwork. 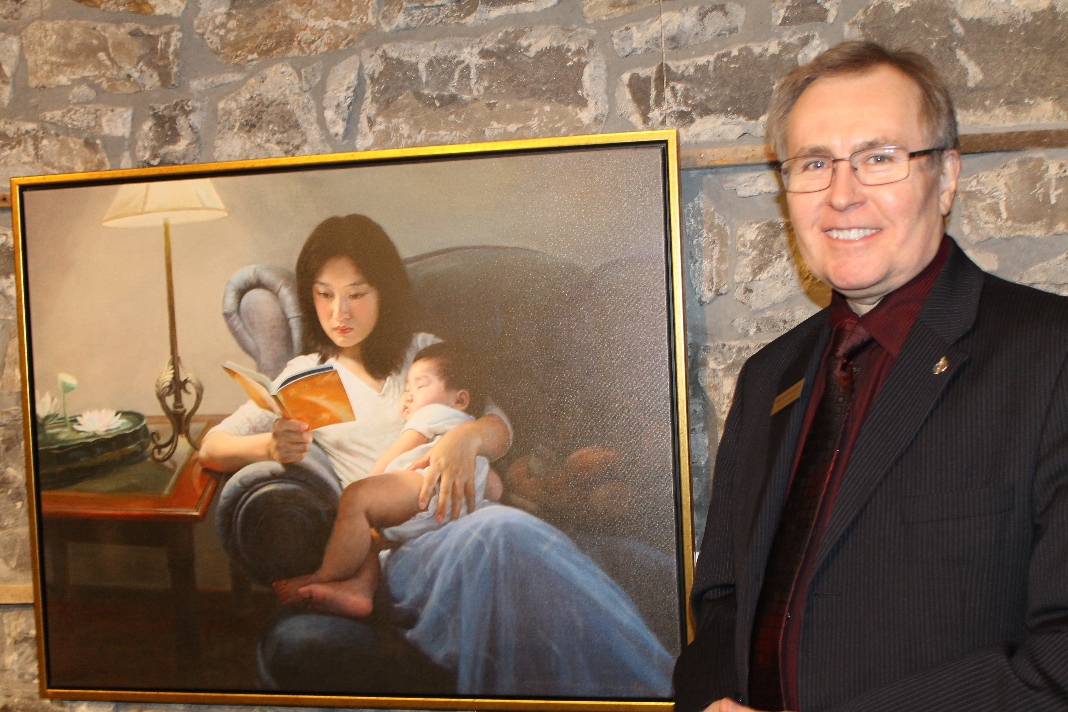 MP Stephen Woodworth was happy to learn about Falun Gong through the art exhibition.

Former Secretary of State Mr. Kilgour said, “I believe that we live in a visual age and that many of these paintings have a huge impact on people. Like that one over there of that girl in Manhattan I can never get out of my mind.”

Rev. Majed EI Shafie, the founder of One Free World International, has been calling for attention to human rights violations based on belief in many countries. He was arrested, tortured and sentenced to die in Egypt because of his faith. He was once tortured for seven days for refusing to give up his belief. He eventually escaped Egypt and is living in Canada. Rev. Shafie said this was a very successful exhibition. Falun Gong practitioners have been expressing their ideas and faith with beautiful artwork. The characters in the paintings were lively and touching. The exhibition showed the world again that Falun Gong practitioners would always resist the brutal persecution through peaceful means. He saw harmony from Falun Gong practitioners. He believed they would prevail.

Fred Litwin, President of the Free Thinking Film Society, hoped every resident of Ottawa would come to visit the exhibition and learn about the persecution. Many pieces of artwork, especially the one called “My Son,” left him with a deep impression. The artist used a technique similar to closeups in movies, to show the sadness and despair of a mother holding her son's body. It was very touching. Mr. Litwin said the persecution of Falun Gong is a crime against humanity. As a member of the international community, we should work together to stop the persecution. Supporting Falun Gong is supporting ourselves.

Renowned artist and the main organizer of the art exhibition Kathleen Gillis said we had the responsibility to tell the world what was happening in China, and tell people Falun Gong practitioners are facing the brutal persecution peacefully and with compassion. We also need to tell people that good will be rewarded and evil punished.