Washington Post Editorial: Human Rights Should Not Be Sidelined

(Minghui.org) A recent Washington Post editorial criticized the US government for failing to openly raise the issue of human rights during Vice President Joe Biden's visit to China. This significant issue was left out of the bilateral talks. The article gave Danielle Wang as an example of those who suffer because of severe human rights violations in China.

Danielle's father, Wang Zhiwen, was arrested in July 1999, the month the Chinese communist party launched the persecution of Falun Gong. Danielle, 19 then and 33 now, has not seen her father since. She testified at the “Let Our Fathers Go” US congressional hearing on December 5. 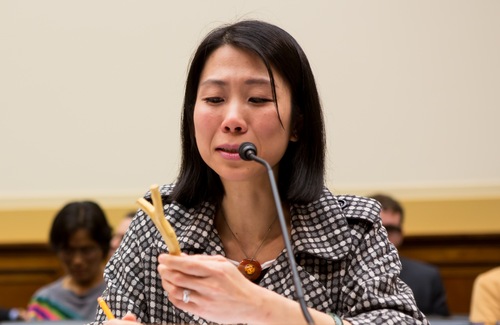 Danielle Wang calls for her father's release at the “Let Our Fathers Go” congressional hearing in Washington DC. The small tree branch she showed is the only thing she has received from her father in the past 15 years. Her father, a Falun Gong practitioner, was arrested and sentenced to 16 years in prison at the beginning of the persecution of Falun Gong in China.

Mr. Wang Zhiwen was a former volunteer contact person for the Falun Dafa Research Institute in China and one of the few Falun Gong practitioners who met the then Chinese premiere during the April 25 appeal in 1999. He was sentenced to 16 years in prison without an open trial.

Ms. Wang has been trying to rescue her father for over a decade. Sadly, she is not the only one in this heartbreaking situation. Yu Minghui, a media professional in London, is calling for the release of her parents, both of whom are Falun Gong practitioners. 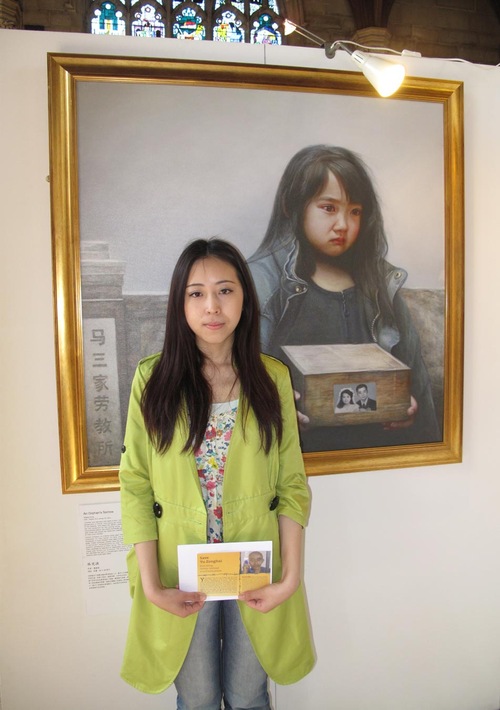 Yu Minghui stands in front of the painting, “Orphan’s Sorrow,” at the Art of Zhen, Shan, Ren International Exhibition in the United Kingdom in June 2013. She holds a postcard with her father’s photo and some basic facts about the persecution. It is pre-addressed to the Mudanjiang Prison in China, where her father is incarcerated.

Ms. Yu's father, Yu Zonghai, a former art assistant at the Mudanjiang City Library, has been illegally imprisoned in Heilongjing Province, China, for the past 12 years for practicing Falun Gong. Her mother, Wang Meihong, also a Falun Gong practitioner, and worked as a senior engineer, has likewise been imprisoned in China for over 10 years.

Mr. Yu was disabled from an eye injury due to forced labor at the Mudanjiang Prison in 2006. Attempting to attain a 100% “transformation” rate in their efforts to force practitioners to renounce their faith, the guards intensified the persecution in 2009, subjecting Falun Gong practitioners to torture. Mr. Yu was reported to have been tortured in various ways including sleep deprivation and being drenched with cold water outdoors in the freezing winter in northeastern China.

“Life without a father is so difficult,” said Ms. Wang at the hearing. It is even harder for those in China.

Many children and young adults in China have lost their father, mother, or both, as a result of the persecution. Life can be so hard that one young person, Li Qingqing, tried to commit suicide.

Li Qingqing, 13, is a student at the Heping Middle School in Jiangjin City near Chongqing. She lost her parents when she was 9. Her father died of sickness in 2000. Her mother, a middle school teacher, was tortured to death at a brainwashing center in Jiangjin City the day after the Chinese New Year in 2001. Qingqing had to move to her uncle's home and often cried over the loss of her mom.

She was isolated at school. Her classmates avoided her because of the persecution of Falun Gong. Qingqing attempted suicide by drinking pesticide. Afraid of getting involved and facing persecution themselves by the communist regime, her neighbors didn't even dare to rescue her upon discovering that she had taken the poison. She survived only because the pesticide was a counterfeit product.

Congressman Robert Pittenger asked the five daughters who testified at the “Let Our Father Go” hearing for one word to take back to remind the US Congress and his colleagues to always remember this major human rights issue. “Hope” and “love” were among the words given.

Danielle's word was “courage:” “The courage to speak the truth.”

The young woman is a symbol of courage herself. She told the Washington Post that when her grandfather was beaten to death during the Cultural Revolution, her grandmother chose to remain silent. Now another generation is suffering. She is determined to carry on her efforts and has faith that goodness will prevail.