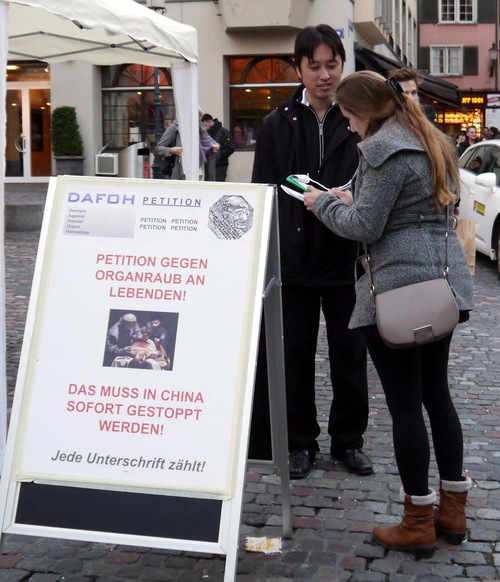 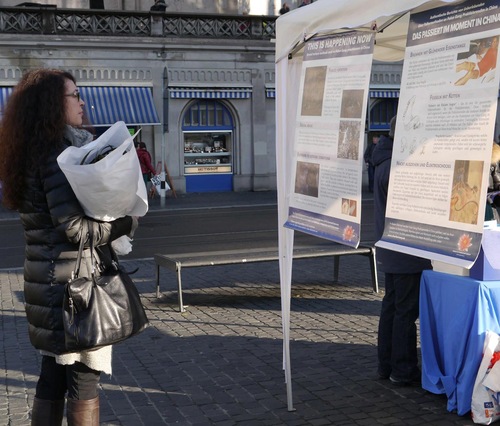 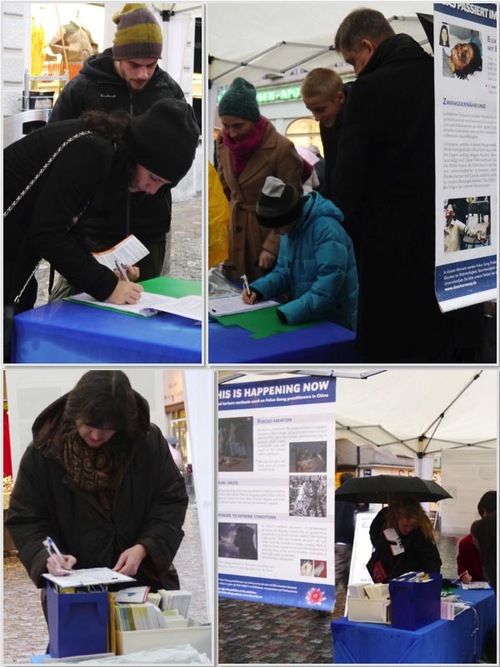 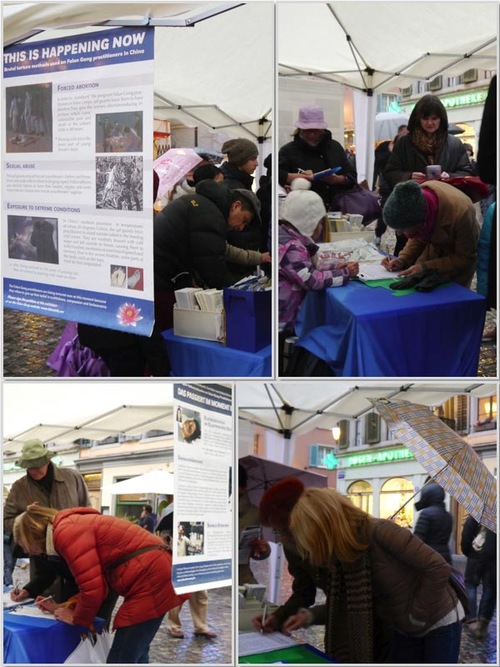 One lady carefully read the information on display concerning the torture of Falun Gong practitioners. Wanting to know more, she took a copy of Minghui Special Edition and starting reading it.

Falun Gong practitioners also went to a bustling Christmas market near the petition booth to collect signatures. Some tourists, after reading the display boards, signed the petition. One girl asked whether or not organ harvesting still took place in China. Upon learning that live organ harvesting was rampantly taking place behind-the-scenes in China, she didn't hesitate to sign the petition. She mentioned that she had found the same information in the Czech Republic, but didn't realize that it's actually happening right now. Many passersby expressed their support for the practitioners' efforts.

Although it was rainy and cold in Zurich on Saturday, November 23, many people signed the petition at Hirschenplatz. Some passers-by even got in line in the rain to sign the petition.

In the rain, René read carefully the display board depicting how Falun Gong practitioners are tortured in Chinese prisons, and had a chat with a practitioner on the subject. He said that he had read the display boards beforehand and came this time specifically to sign the petition. He said to the practitioner, "How can they take people’s organs against their wishes? That is intolerable."

René had heard of Taichi and Qigong, but it was his first time to hear about Falun Gong. After listening to the introduction of Falun Gong, he said, "I think (Falun Gong) is very good. It energizes a person, and brings about inner peace and balance. The merits of Falun Gong can bring goodness to people all over the world. I think it is very good." After understanding how Falun Gong benefits a person both mentally and physically, René knew that the persecution is unjust and wrong. He said, “I cannot understand and cannot imagine that the authorities are persecuting such a group of good people, and putting them into jails and stealing their organs, which is really outrageous.”

He hopes his signature can be part of the collective effort to "arouse people's conscience and stop the persecution. I hope the signatures can generate a powerful force to stop those who are still stealing people’s organs."

Ms. Bohman is from Ecuador. It was the first time for her and her daughter to hear about Falun Gong. After being informed of the persecution, they immediately signed the petition to stop the persecution and the live organ harvesting in particular. Ms Bohman said, “This is the right thing to do. Whatever the reason, we cannot tolerate people having their organs taken against their will. It is so horrible and unfair. I hope to add my own strength to this campaign and to stop this crime." Her daughter said, "This (organ harvesting) should not be allowed. I heard about how Falun Gong practitioners are persecuted, which is really terrible. I hope to be able to help stop all of this." She requested more information and wanted to research the issue further.