(Minghui.org) A stunning parade of about 900 Falun Gong practitioners in Kowloon, Hong Kong, on December 1 had a big impact on Hong Kong citizens and Chinese tourists. “Go, Falun Gong!” was often heard from the spectators. Many Chinese tourists were amazed, because this was something they could never see in mainland China.

The parade was a call for an end of the crimes of organ harvesting from living Falun Gong practitioners in China and a salute to the over 150 million Chinese who have quit the Chinese Communist Party (CCP) and its affiliated organizations. This Quit-the-CCP movement was inspired by the publication of the Epoch Times editorial Nine Commentaries on the Communist Party nine years ago.

The purpose of the parade was to encourage Chinese tourists to quit the CCP. Several made their decisions just as the parade started. The procession followed a route the practitioners had taken the day before at another event, which covered busy areas on Hong Kong Island. Hong Kong Island, Kowloon, and New Territories are the three main regions of Hong Kong. 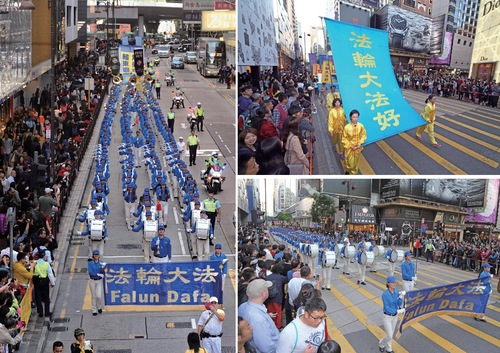 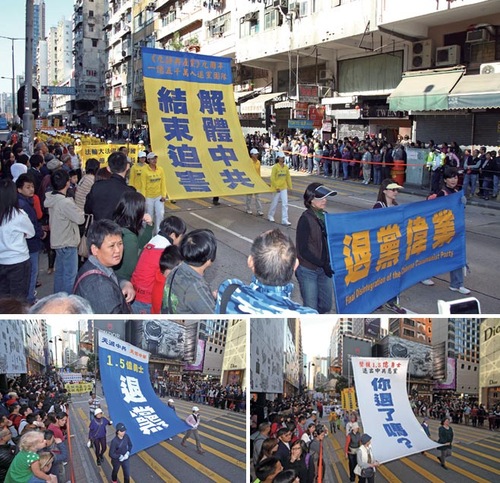 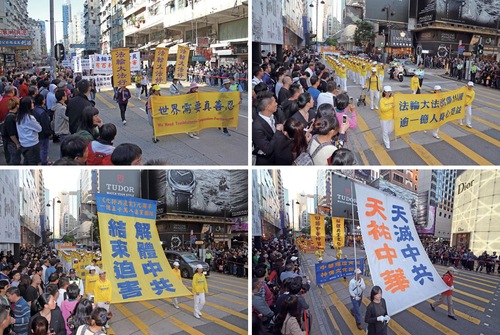 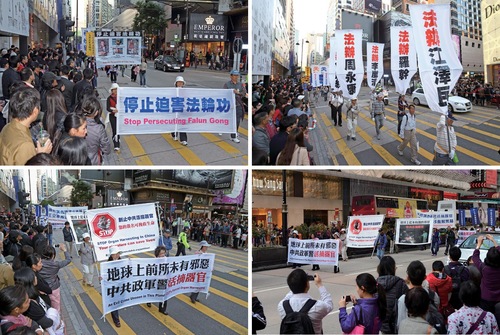 Evil Acts Must Be Exposed

Before the parade began at 2:00 p.m., 70-year-old Mr. Wang who lives nearby told one of the practitioners, “I'm from Dongguan [a city in Guangdong Province, China]. Most people in Dongguan support Falun Gong.” 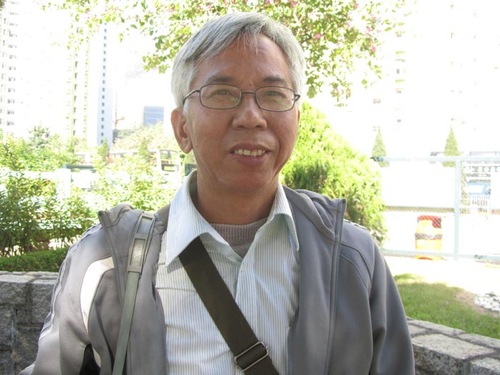 Mr. Yang agrees to expose the Chinese regime’s evil crime of forced organ harvesting and to stop the persecution of Falun Gong.

Mr. Yang from Kowloon said that he began supporting Falun Gong when the number of people who quit the CCP and its affiliated organizations reached one million. He was moved by the practitioners’ determination to end the persecution. He traveled for an hour to be in the parade. He said, “I participate in the Falun Dafa parades every time. I haven't missed a single one.” “The CCP’s brutality against Falun Gong is unacceptable. It has to be exposed and it must be stopped. The persecution and the organ harvesting need to stop.”

The Divine Land Marching Band led the parade, followed by practitioners demonstrating the exercises, banners, the flag-drum contingent, and the waist drummers. The parade was accompanied by majestic music played by the Marching Band. The parade attracted many passersby, who eagerly took pictures.

“Go, Falun Gong!” People frequently shout words of encouragement when they see the Falun Gong parades. Many people waited for the parade with their cameras. Mr. Lin from Cheung Sha Wan had a big smile on his face. He said, “Falun Gong is great! I often see the parades and I'm very touched.” He asked the practitioners for truth clarifying DVDs.

When the parade passed the stores on Nathan Road, many people praised practitioners and said, “It’s Falun Gong! How wonderful!” A large crowd of people gathered as soon as they heard the music. One man pointed at the parade and told his girlfriend, “Falun Gong! Falun Dafa is good! These are Master Li Hongzhi’s followers!”

Because the authorities persecute practitioners in China, many Chinese people couldn’t believe the scale of the parade and were even more amazed to see that the police were in the front helping guide the procession.

Ms. Li from Shenzhen, a city in Guangdong Province bordering Hong Kong, was excited to see the event and took a lot of pictures. She said she wanted to show her family and friends when she returned.

Ms. Chen videotaped the parade. She was astonished to see it, “This can’t take place in China.” She learned about the forced organ harvesting atrocities and said, “I am shocked. I will definitely support the practitioners. They have their rights and freedom.”

Before the parade started, hundreds of practitioners gathered at Cheung Sha Wan in the morning and did the exercises together. Shortly before the march, a rally was held, and Guo Jun, Editor-in-Chief of The Epoch Times , spoke. Ms. Guo talked about how the Epoch Times editorials, the Nine Commentaries on the Communist Party , woke up people in China and began the trend to quit the CCP and its affiliated organizations. She congratulated the Chinese people who had found their morality and courage and separated themselves from the evil CCP.

During the rally, Falun Gong practitioner Ms. Chang said she wished that, through the rally and parade, the truth of Falun Dafa and the facts about the brutal persecution of practitioners by the Chinese regime could be made known to more people. “More and more people have awakened to the truth and they will make the right choice--to stand by justice and goodness,” said Ms. Chang. 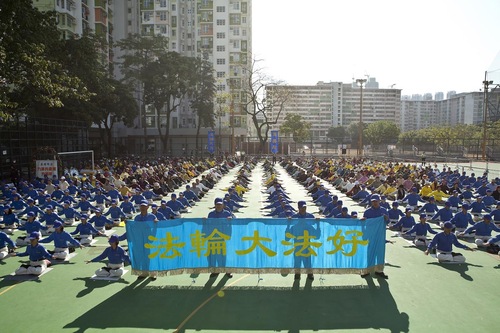 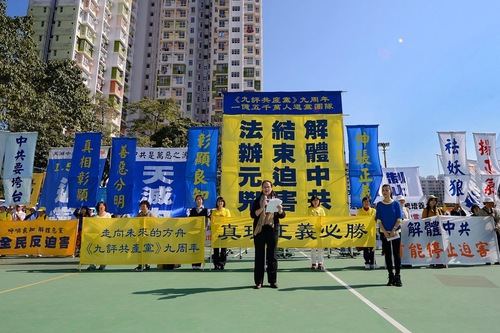 Guo Jun speaks at the rally before the parade. 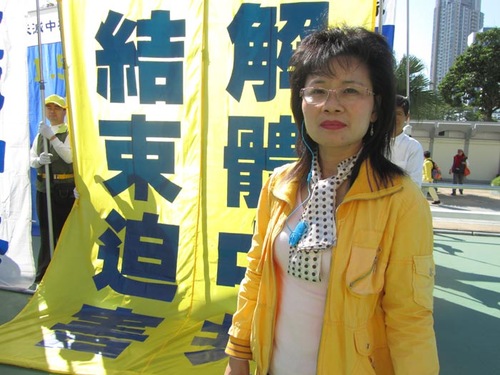 One of the hosts of the parade, Ms. Chang.

Practitioners who helped people quit the CCP and its affiliated organizations said that many people were especially eager to accept the Falun Dafa fliers that day. Mr. Yuting said, “Many Chinese people immediately quit after a short conversation. One of them gave me a thumbs-up and said that he envies the free environment in Hong Kong.”

Mr. Rong said that, as the procession went by, many people took the fliers and quickly agreed to quit the CCP. One of them said “Falun Gong is good!” A man in his 30s shouted, “The CCP is bad and Falun Gong is good. I support you!”