They collected signatures from the public, calling for an immediate end to the CCP’s crime of organ harvesting from living Falun Gong practitioners. 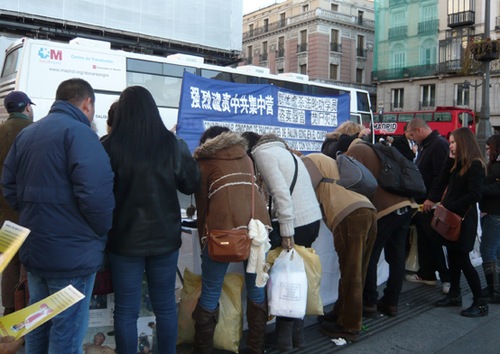 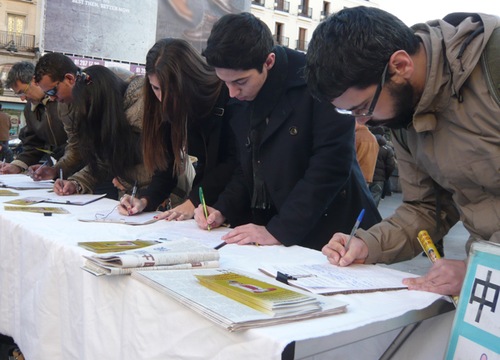 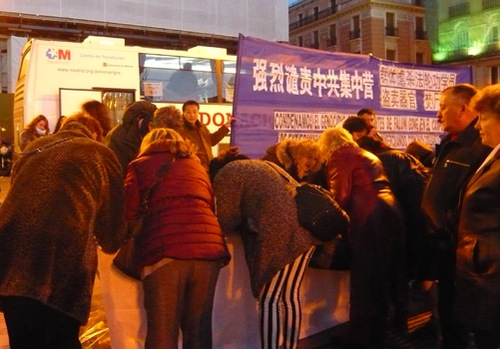 Even as night fell and street lights came on, a steady stream of people continued to sign in support of Falun Gong. 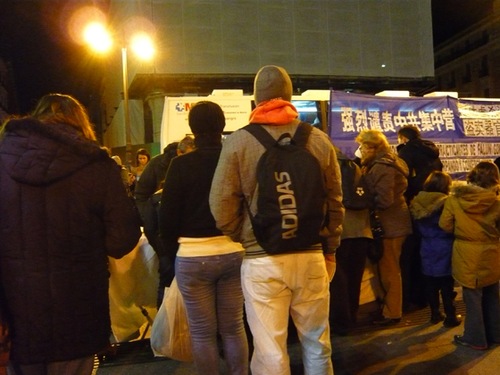 Puerta del Sol is located in Madrid's bustling commercial district near the entrance to the cinema, a very popular destination. In 2006 the CCP’s harvesting of organs from living Falun Gong practitioner was first reported, sending shock-waves around the world. Since then, Falun Gong practitioners in Spain have often rallied at Puerta del Sol Square, calling for and end to the CCP’s crimes against humanity.

Multilingual display boards and large banners decrying the CCP's practice of live organ harvesting were laid out on the square. Mr. Carlos Iglesias, the attorney in the Spanish lawsuit against Jiang Zemin, spoke at the event, condemning the Chinese regime's crimes against humanity committed in the persecution of Falun Gong.

Shocked to hear about the harvesting of organs from living Falun Gong practitioners, many people signed the petition.

After signing his name, Mr. Orlando from Venezuela eagerly asked for more information. He said he knew several politicians in Venezuela and that Venezuela had signed a number of agreements with the Chinese government, but he believed that his country did not know about these atrocities. He said that such facts were very important to his country and took several leaflets, saying he would give them to his friends back home, so that they would understand what the CCP is really like. More importantly, his friends in politics would know what kind of a regime they were dealing with.

A lot of people were hurrying by, but when they heard about the CCP's hideous crime of organ harvesting, they stopped in their tracks and signed the petition.

In the passing crowd, some were young college students and others were families traveling on the weekend. When they heard about the forced organ harvesting, they were shocked and enraged and did not hesitate to sign the petition. Often when one person learned the facts, he would call over his relatives and friends to sign. Some saw the banner from far away and made a beeline for the table to sign the petition. Sometimes, there was a long queue in front of the table waiting to sign.

November 24 marked the ninth anniversary of the Epoch Times ’ publication of a series of editorials, the Nine Commentaries on the Communist Party. Since the publication of the Nine Commentaries , more than 150 million people have quit the CCP and its affiliated organizations, separated themselves from the evil CCP's control, and gained a new life.

Falun Gong practitioners encountered many Chinese people during their activity on Puerta del Sol Square. Some of them quit the CCP and its affiliated organizations after understanding the facts. One mainland Chinese tourist passing by said to a Falun Gong practitioner, "I already know what you are telling me. The Communist Party is horrible." He withdrew from the Chinese Communist Party and its affiliated organizations. Having heard the truth, another young Chinese said to the practitioners, "You're amazing!" He also quit the CCP.