December 02, 2013 |   By a Minghui correspondent from Liaoning Province, China

(Minghui.org) Ms. Sun Ying, 78, from Yingkou City, Liaoning Province, was cured of late stage cancer 14 years ago through practicing Falun Gong. However, during the 14 years of persecution against Falun Gong, she has been arrested 15 times and illegally sentenced twice for refusing to give up the practice. Nine years of imprisonment has wrought tremendous damage upon her mind and body, and shortly after her release she lost sight in both her eyes.

Below is Ms. Sun's account of the persecution she experienced.

My name is Sun Ying. I'm 78 years old, and I'm from Bayuquan, Yingkou City, Liaoning Province. I started practicing Falun Gong in January 1999, and before that I had rectal cancer, for which I underwent surgery in 1996. After the surgery I lost control over my left leg and the right portion of my brain. I took a lot of medications and underwent treatments from many doctors, to no avail; I was on the verge of death at that time.

However, within three days after watching Teacher Li Hongzhi's 9-day lecture video, I stopped taking medicine and my cancer miraculously disappeared—all of my diseases vanished. That year I was 64 years old, yet I felt like a young person and I could walk very fast. It was Dafa that gave me a second life, and I am so fortunate to have been able to study Dafa in my lifetime.

Ever since then, I believed firmly in Teacher and Dafa, and I required myself to act according to the principles of Truthfulness-Compassion-Forbearance. In the past, I frequently argued with my husband, but after studying the Dafa books, I treated him kindly—moreover, my entire family became harmonious. Upon seeing this, my children were elated and supported my cultivation. One after another, at least 10 people in my household began practicing Falun Gong.

The Chinese Communist Party (CCP) started the irrational persecution against Dafa and Dafa practitioners on July 20, 1999. At that time I lived in Yangzhangzi, Lingyuan City, Liaoning Province, and various members of my family worked at the Xiangdong Chemical Factory in Lingyuan. I went to Beijing with my daughter and fellow practitioners (four of us in total) on October 2 to appeal for justice for Teacher and Dafa. When we stayed at a hotel in Lingyuan, four security officers from the Xiangdong Chemical Factory arrested us.

The third day after I returned home, we practitioners went to Beijing to appeal once again. Officers from the Dongbeiwang Police Station, Haidian District, Beijing City, arrested us on October 19 and took us to the Liaison Office of Chaoyang City in Beijing. The next day, security officers from the Xiangdong Chemical Factory took us back to the Lingyuan watch house where we were imprisoned. Several days later, I was taken to the Lingyuan Detention Center and imprisoned for several days more. My daughter, Zhang Yueying, was taken to the Chaoyang correctional facility and later to Masanjia Forced Labor Camp for persecution.

At the police station the police asked us: “What do you want to do here? Where do you come from?” We didn't answer. The police used base methods to obtain my home address, and they locked me up in a small cell that evening. The next day, police from Lingyuan took me to the Liaison Office of Lingyuan City in Beijing. After one day, security officers from the Xiangdong Chemical Factory took me back to the Lingyuan Detention Center, where I was imprisoned for two weeks before being released.

After I returned home, security officers from the Xiangdong Chemical Factory, including Sun Guohua, frequently harassed me and ransacked my home day and night, confiscating my Dafa books and Teacher's picture. They ransacked my home about 15 times and imprisoned me at the Lingyuan Detention Center 6 times, for a total of about 6 months worth.

Illegally Sentenced for Clarifying the Truth

Several practitioners and myself were arrested by security officers from the Xiangdong Chemical Factory while distributing Dafa truth-clarification materials on September 11, 2001. We were handcuffed and taken to the Lingyuan Detention House the next day. There were several dozen practitioners at the detention center, and we were forced to watch videos slandering Dafa while the police stood around holding electric batons. After one month, I was taken to the Lingyuan Detention Center and detained for one year there.

Nine other practitioners and I were forcibly taken to Dabei Prison in Shenyang City around June 2002. Two of us were taken in and the others were turned away by the prison. After one night's lockup in a small cell, we were released.

However, we were forcibly taken back to Dabei Prison once again in August. Four elderly practitioners and myself were released. We were taken to Dabei Prison again in November, and I was sentenced to four years by the Lingyuan Municipal Court. My family was also fined 400 yuan. The authorities went to my home multiple times to demand the fine be paid, but my family refused to turn over any money.

Because of my imprisonment, my husband and children were greatly harmed. My 70-year-old husband had a stroke due to anxiety. Also, there was no one to care for my seven-year-old grandson, and my family was breaking up.

During the three years spent in the Dabei Prison, I was forced to do filthy and intensive slave labor. I stitched clothing, made cotton swabs, and exported goods, among other things. My daily labor usually consisted of about 13 hours worth. Practitioners were also forced to read books slandering Dafa, and if we refused, a criminal inmate would read to us. We were forced to write reports about our thoughts. When I refused, they used various forceful methods to pressure me to write. I would then write phrases that validated Dafa.

They forced us to watch videos slandering Dafa, but I didn't watch or listen. Sometimes they would take me to the office and ask, “Are you going to reform?” I would say, “No.” They would then try to entice me with a reduction of my prison term. I simply replied, “If I have to 'reform' to get a term reduction, I'd rather not.”

After four years of wrongful imprisonment, I was finally released on September 11, 2005.

My family relocated to the Bayuquan District, Yingkou City, Liaoning Province in December 2006.

The Chief of the Bayuquan Domestic Security Division, Wang Hongqui, led six policemen to ransack my home on June 15, 2008. They confiscated my Dafa books, CDs, and truth-clarification materials. They also arrested my daughter, Zhang Guiying, and her husband, Zhang Xiao (both non-practitioners). Both were then detained at the Bayuquan Detention House for 15 days.

After 15 days I went to the detention center with fellow practitioner Yu Zhihong to take them home. However, the authorities refused to release my daughter and son-in-law, telling us that only the officers who brought them in could grant their release. Thus, we went to the Domestic Security Division to demand their release. However, upon arriving there, the police detained us as well. They took Yu Zhihong back to her home, confiscated her Dafa books, and then imprisoned her for five days at the Bayuquan Detention Center. I was taken to the Bayuquan Detention Center.

When I entered the detention center, the wardens did a body search on me and found three Dafa books. Warden Li Shouwei struck my head with the books so hard that the force sent me falling to the ground. Then he began to kick my right leg; my leg was black and purple by the time he was finished. For the next two weeks I had difficulty walking.

I was imprisoned at the detention center for seven months, and my family was not allowed to visit me; neither were they allowed to obtain any information about me. The wardens finally told them on December 23, 2008, that I had been secretly sentenced to five years of detention.

I was taken to the First Ward of the Senior and Disabled Team of the No. 11 Prison Area of Liaoning Provincial Women's Prison on February 11, 2009, where I suffered various tortures for five years. Some of the persecution I experience there included being pressured to “reform,” being sleep deprived, being forced to stand for long periods of time, being closely monitored, being beaten and verbally abused, and being forced to do slave labor. All practitioners were forced to do slave labor for 13 hours a day, which mainly included making cotton swabs. 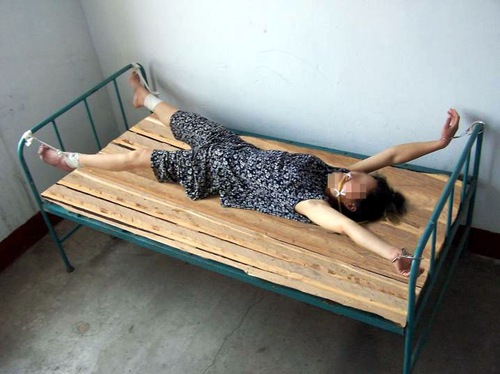 The wardens poured cold water on practitioners, beat them with wooden paddles, jabbed them with broken toothpicks, and force-fed those who went on hunger strikes. Some practitioners were tortured for as long as one month straight at hospitals through brutal force-feeding.

At every moment during the five years of imprisonment, my mind and body were under tremendous pressure—the pain cannot be expressed through words.

I was finally released at the age of 78 after five years of imprisonment on June 29, 2013. Due to the long-term imprisonment and forced labor, as well as the painful torture, I suddenly lost sight in both of my eyes in October. Currently, I rely on my daughter to take care of me.