Drawing by a 10-Year-Old: The Truth Spreads Far and Wide

(Minghui.org) The following drawing was done by a 10-year-old in China who doesn't practice Falun Gong. Perhaps, through the eyes of a child, we can see what is happening in China today. 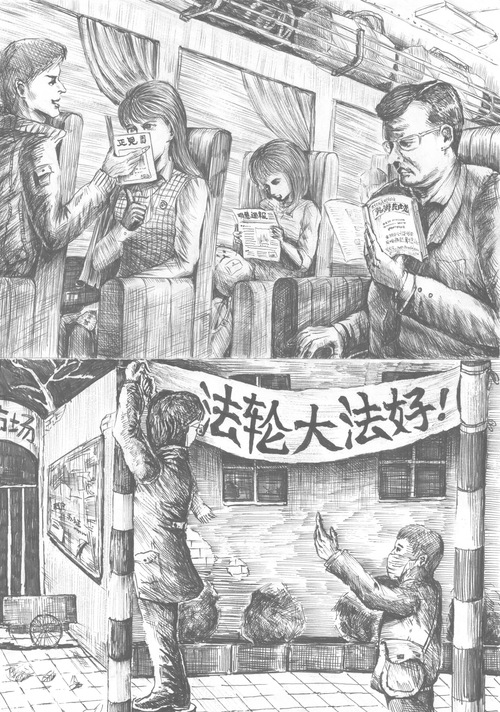 The top part shows a Falun Gong practitioner clarifying the facts about the persecution in China to the other passengers on a bus. The pamphlet in her hand says “Righteous Insights” on the cover.

The woman in front of her is listening and gives her a thumbs up. The woman in the second seat is deep in her reading of Minghui Weekly, a truth-clarification periodical with numerous local editions and wide distribution in China.

The man holding the book Nine Commentaries on the Communist Party in his left hand is tense. He appears absorbed in his own thoughts. His right hand reveals his emotions.

Perhaps he is thinking of quitting the Chinese Communist Party (CCP), or he may be upset about those who have been persecuted. Regardless, we know that his views on a lot of issues will be different after this bus ride.

The bottom part shows two Falun Gong practitioners hanging up a banner that says “Falun Gong Is Good” ( "Falun Dafa Hao” in Chinese) outside a marketplace. It's cold, but they are being very careful. One is telling the other if the banner looks straight.

What this drawing depicts is quite common in today's China. Due to practitioners' persistent peaceful efforts, more and more Chinese are learning the truth about Falun Gong and taking a stance against the persecution of the practice. The former head of the CCP, Jiang Zemin, gave orders to “eradicate” the peaceful group out of jealousy over its popularity 15 years ago.

The persecution has prompted the Chinese people to take a close look at the CCP as never before. They are now able to see through the Party's lies and deceit. Over 150 million Chinese have quit the CCP and its affiliated organizations.

Falun Gong was very popular after it was introduced to the public in 1992 by Mr. Li Hongzhi, the founder. The Chinese regime honored Falun Gong with many proclamations and awards, and 100 million Chinese from all walks of life practiced it before the persecution started in July 1999.