The practitioners also set up informational display boards detailing the Party's persecution of Falun Gong, replete with photos and drawings of some of the brutal torture methods used on Falun Gong practitioners. 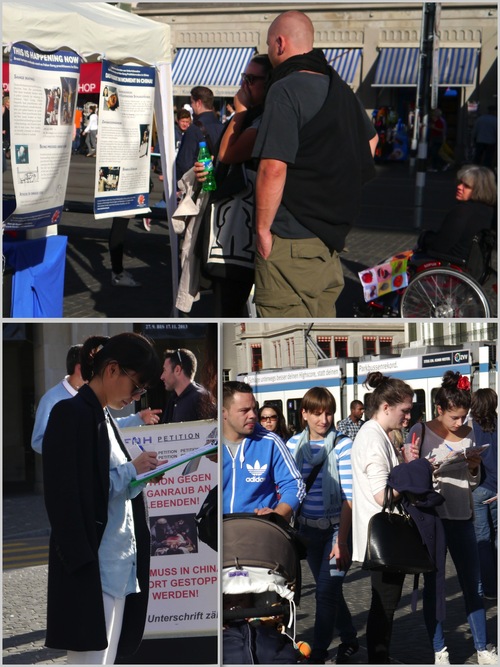 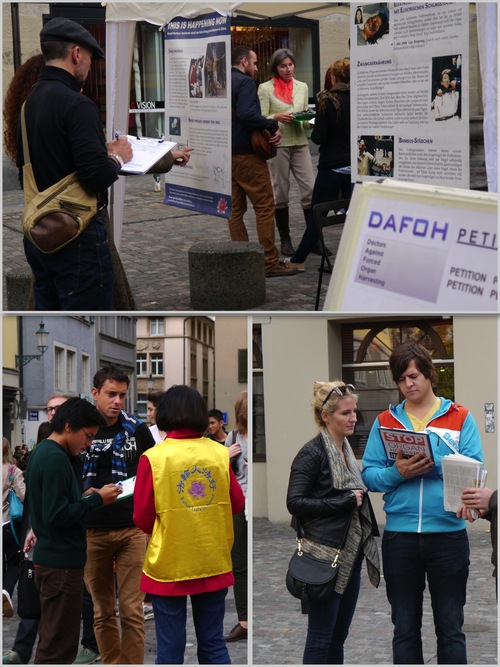 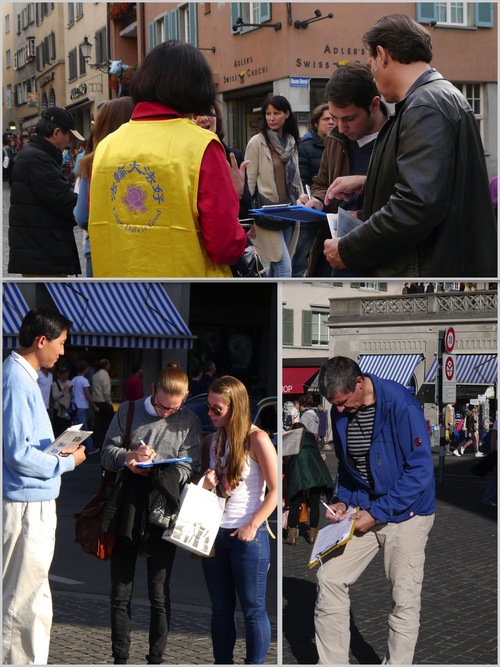 The CCP is “Creating Hell on Earth for Millions of People!”

Mr. Helmut carefully read the display boards, then signed the DAFOH petition. He said that he had previously heard about the persecution of Falun Gong.

“Human beings should be free to practice whatever exercises they want to,” he exclaimed, “as long as the exercises don't impinge on the rights of other people. The Party has no right to interfere with its citizens on this point, especially Falun Gong practitioners, whose exercises don't bother a soul.”

Addressing the CCP’s atrocities of live organ harvesting, he said, “This is inhumane. It is unbelievable! What this regime has been doing is absolutely creating hell on earth for millions of people!”

Before he left, Mr. Helmut said that he hoped his signature would make a difference, and that the Chinese people would make the effort to learn more about Falun Gong and the persecution in China. “Please open your eyes people. Open your hearts and carefully listen!”

“This Is So Obvious: Live Organ Harvesting Must Be Stopped!”

After a passerby read the display board that read, “Live Organ Harvesting in China Should Be Stopped Immediately,” he signed the DAFOH petition.

His wife came up to him and admonished him for signing the petition without doing in-depth research on Falun Gong and the persecution. “I have to read more about it before I decide whether I want to sign it or not,” she told a practitioner.

When she picked up a flier and saw the words, “Stop live organ harvesting in China,” she asked a practitioner to explain. “The CCP uses its army, police, hospitals, and prisons to rake in huge profits by extracting organs from living Falun Gong practitioners,” said the practitioner.

The woman grabbed the petition form and immediately signed her name, saying, “I normally only sign a petition after I learn more about it, but this is so obvious: Live organ harvesting must be stopped!”

Daniel, a young Spaniard, said that he had already signed the petition a week before. He then asked for more details on Falun Gong and the CCP’s persecution. He said that he really appreciated the practitioners' selflessness.

“You Do This Out of the Goodness of Your Hearts”

“No one pays you to stand here and talk about this persecution, which is really rare nowadays,” he exclaimed. “You do this out of the goodness of your hearts. Amazing!”

Two teenagers stopped by the practitioners' booth and signed the petition. “It is very important for people to show their support for Falun Gong,” said one of the teens.

“The Persecution of Falun Gong Should Never Have Happened!”

Two young Spaniards told a practitioner that they had taught themselves Mandarin, and then spoke to the practitioner in fluent Chinese. “We want to understand the facts about Falun Gong and this unprecedented persecution,” said one of them. After hearing the practitioner's explanation, they said, “The persecution of Falun Gong should never have happened!” They felt that signing the petition was very important.

Many passersby who signed the petition expressed their appreciation for the practitioners' efforts, and wished them success in bringing an end to the persecution as soon as possible.