November 20, 2013 |   By a Minghui correspondent in Heilongjiang Province, China

(Minghui.org) Ms. Ren Xiuyun is a resident of Nanshan District of Hegang City, Heilongjiang Province. She had been arrested and detained by police five times. She was again taken to a brainwashing center and detained for 24 days starting September 6, 2013.

The first time Ms. Ren was arrested, her daughter was only eight years old. The little girl missed her mom and could only express herself through pictures. She drew many pictures of parents holding hands with their children.

Ms. Ren Xiuyun is over 40 years old now. Over ten years ago, her heart problem was so severe that she would faint whenever she was upset or startled. When she had cranial nerve pain, she could not move at all. Onset of her condition sometimes blocked traffic if she happened to be on the street. She also suffered arthritis and had to wear sweat pants in mid-summer.

After Ms. Ren Xiuyun started practicing Falun Gong, she began following the principles of Truthfulness, Compassion and Forbearance and her health improved so much that she no longer needed medication. Many people witnessed the changes in her and saw the goodness of Falun Dafa from her actions. For example, she often sweeps the hallways in the apartment building she lives. She bought whitewash and painted the walls outside her home without being asked. She took care of an 80-year-old neighbor who was hospitalized, because her family was too busy. There are so many stories of people she helped – far too many to write down.

Ms. Ren Xiuyun is tolerant, patient, kind, hardworking and honest. She takes good care of her husband and child. She is also filial to her mother-in-law. She works as a housekeeper and has very good reputation. She has many clients and people all trust her.

Ms. Ren was harassed continuously. On January 5, 2000, she went to Beijing to appeal for the right to practice Falun Gong. When she returned, she was arrested by police from the Lilinshan Police Station of the Nanshan Police Department. She was detained at the Hegang Detention Center for ten days and only released just before Chinese New Year. The day after Chinese New Year, police illegally arrested her in front of her seven-year-old daughter. She was taken to the Lilinshan Detention Center and held for three days. Zhang Yanfu participated in her arrest both times.

Police from Lilinshan Police Station arrested Ms. Ren again on June 15, 2001. She was inhumanly beaten at the police station and had many injuries. Two police officers beat her with ice filled water bottles and kicked her. She was beaten until 2 a.m. or 3 a.m. 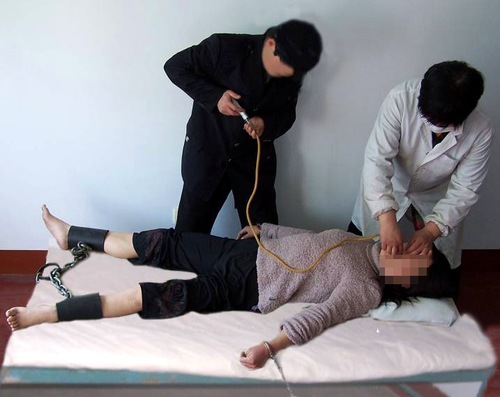 Ms. Ren was taken to the No. 2 Detention Center the next evening. On the morning of the third day, a female guard with the surname of Jian slapped her face. After six or seven days, Ren’s face was still purple and black.

Ms. Ren went on a hunger strike to protest the torture but was hit again by the female guard. Guards tortured her using force-feeding. They mixed large amounts of salt with food. One time, she passed out during force-feeding. Sometimes the feeding tube got stuck and caused bleeding and excruciating pain.

Later she was framed by police and sentenced to a three-year term in a labor camp.

Ms. Ren Xiuyun was forced to do work in the Xigemu Forced Labor Camp in Jiamusi. It was cold in the workshop, her feet and legs turned black and were swollen. She had to wear much larger shoes. The pain in her legs kept her from sleeping at night. Her legs still hurt after over a year.

Because she refused to lie, she was tortured with the “Carrying a Sword on the Back” method for two hours. It is an extremely cruel method to torture a person. A person’s one arm is pulled up and over the shoulder while another is pulled up from behind, both hands are cuffed together with handcuffs. Ms. Ren was cuffed in such a way to a bed frame and three or four guards kicked her with boots. Female guards that participated include Hong Wei and Liu Yadong.

In September 2005, Ms. Ren was again arrested and taken to the Jiamusi Forced Labor Camp for a year. In December 2007, Ji Jianjun of the Gongnong Police Department arrested her and took her to the No. 2 Detention Center. She was beaten and taken to a forced labor camp. She didn't return home until February 8, 2008.

Police broke into Ms. Ren Xiuyun's home and took her to a brainwashing center around 7:30 a.m. on September 6, 2013. She was painting the house at the time.

The head of provincial 610 Office, Gu Songhai was the mastermind behind this arrest. He had a woman pretend to be member of community committee and tricked Ms. Ren to open her door, that's when four officers from Lilinshan Police Station forced themselves inside the home.

The personnel attempted to “transform” her using violence at the brainwashing center. Guard Zhang Zilong hit and kicked her, and also shocked her with electrical baton on her arms and chest twice. Other guards participated in the beatings too. She was forced to watch videos that defame Falun Gong and write “thought reports.” She was released on September 30.

People involved in the persecution include the head of Nanshan 610 Office, a man and two women. Others are Zhang Dali, Ai Hongwu and Zhang Zilong.