(Minghui.org) On October 15-21, 2013, Falun Gong practitioners in Ukraine held the Art of Zhen Shan Ren International Exhibition in the city of Odessa, a major tourist and trade destination with a bustling port and lovely beaches. A local TV station, KRUG TV, aired a special report on the art exhibition titled, “China's path to truth.”

“The Paintings Provide People with the Key to Spiritual Freedom”

The news anchor said that although Falun Gong is freely practiced around the world, it is still being persecuted in China. He also mentioned that the Chinese Communist Party (CCP) is directly involved in harvesting organs from living Falun Gong practitioners, without their consent and without the use of anesthetics.

“The artists' paintings are uplifting and introduce people to Falun Gong (also known as Falun Dafa), an ancient cultivation practice that adheres to the highest universal principle: Truthfulness-Compassion-Forbearance,” explained the news broadcaster. “The paintings provide people with the key to spiritual freedom by helping them overcome their fears and anxieties while living in the material world.” 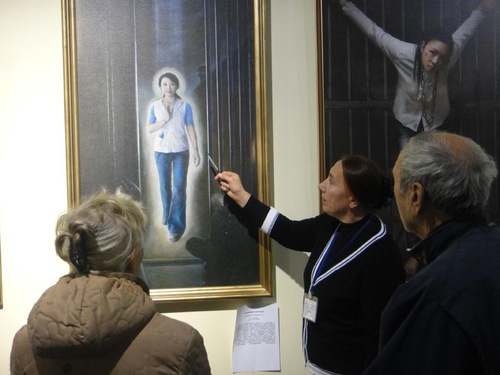 An exhibition guide explains the paintings to several visitors.

The anchorman noted that, “This is not the first time that the spectacular Art of Zhen Shan Ren International Exhibition has come to Odessa.

“The artwork created by Falun Dafa practitioners is based on their understanding of the universe. The main theme of the paintings is the promotion of traditional Chinese morals and values, rather than the political theories and policies of the CCP.

“Based on the universe's highest principles, Falun Dafa was first introduced to the public by Master Li Hongzhi, in 1992. To date, Falun Dafa is being practiced in more than 100 countries and regions around the world.”

The news segment also included an interview with Alexander Rudnev, the president of the Falun Dafa Association in Odessa.

“The Chinese regime has been persecuting Falun Gong practitioners since July 1999,” explained Mr. Rudnev. “Millions of practitioners have been illegally arrested and detained in forced labor camps and prisons where they are being brutally tortured.”

“The torture employed against Falun Gong is only the tip of the iceberg,” said the news presenter. “Actually, the true situation of the persecution is far more terrifying than most people can imagine.

“There is irrefutable evidence that proves that cases of trafficking in human organs in China dramatically increased after the persecution of Falun Gong started.”

“Former Canadian Member of Parliament, David Kilgour and international human rights lawyer, David Matas, conducted a joint, independent investigation into the allegations of organ harvesting in China,” noted Mr. Rudnev. “The evidence that they gathered confirms the fact that the CCP has been actively involved in live organ harvesting of Falun Gong practitioners since 1999.”