The Persecution of Falun Gong: A Broad and Systematic Issue that Matters to Americans 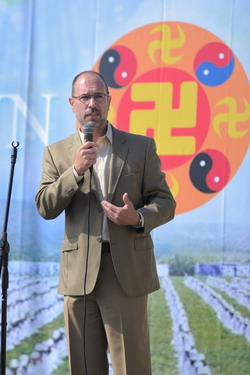 Greg Autry, renowned entrepreneur, writer and educator, shared his insights about the persecution of Falun Gong and China at a public rally on October 20, 2013 in Long Beach, California.

Mr. Autry illustrated how the persecution of Falun Gong is a broad, systematic issue that affects Americans, the American economy, and the rest of the Western world.

The following is the transcript of his speech:

Thank you. I'm glad to be here today. What a beautiful day it is to be out here in a free country, expressing our first amendment rights to say what we want, to tell the truth, and to not be persecuted.

I'd like to talk not just to the Falun Gong [practitioners] here and the people who have suffered persecution in China, but to the other Americans who I hope are taking the time to know what's going on here and get a better understanding of what's happening in China.

I have spent a great deal of my time looking into this issue.

And I want to say to you that it matters to you more than just what's happening to these people.

This is a broad, systematic issue.

The fact that the Chinese government is unethical, and so unethical that it would persecute people, place them in prison for their peaceful religious beliefs, and then execute them and sell their organs for profit is indicative of the systematic problem in China.

This is the way that regime works.

This unethical regime threatens not just the Falun Gong, and not just many other people in China including Christians, Uighur and Muslims, and of course the country of Tibet which is being subject to a slow-motion genocide, it threatens you too.

Because the instruments of repression the Chinese government uses to keep its foot down on the Falun Gong and on the other peoples of China are the same tools that it is exporting around the world to increase its influence at great risk to the American economy and to the rest of the Western world.

They are using the cyber espionage that they have developed internally and the tools of fear, political and thought manipulation to influence the way we think about China and perceive China in the world.

I want to congratulate the politicians who have taken the time to be here from the City of Long Beach for supporting this because there's a great deal of pressure that gets placed on American politicians to not associate themselves with the Falun Gong or any criticism of China.

Because they will give you this impression that there is something special and delicate about the Chinese government and it can't handle any criticism. It can never be criticized.

This is the first indication of an organization that is corrupt if it's unwilling to accept any criticism.

When we allow the Chinese to manipulate our political process and they do this both directly with pressure on state, municipal and federal government, and through our major corporations who are making a great deal of profit by exploiting the Chinese workers and the Chinese environment to increase their quarterly profits, we give up our own freedom.

We cannot allow that to happen in the United States. This needs to be a place where people from all over the world can come to seek refuge and to find freedom. The Falun Gong members are perfect examples of this.

I am not a Falun Gong practitioner. But I can tell you that in the many years that I have spoken with Falun Gong [practitioners], I have never met with anybody who did not treat me with dignity, respect and sincerity.

This is the difference. If you go to China today and you meet with members of the communist party, they will treat Westerners with a great deal of respect, but there is no sincerity.

And you can feel the difference. You are being lied to, you are being manipulated, in order for them to increase their political power and wealth. This has to stop. We as Americans need to stand up for the truth.

Thank you very much for having me here today.