(Minghui.org) Today's News from China includes incidents of persecution that took place in 9 cities or counties in 8 provinces. According to this report, 16 practitioners were subjected to mistreatment during their detention, and at least 3 practitioners were illegally arrested. 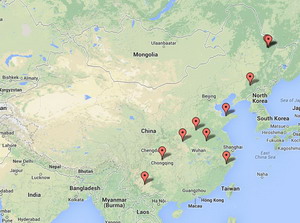 Mr. Zang Kuidong is a teacher at Huiquan School in Laizhou. In September deputy principal Di Yuxin attempted to extract about 5,000 yuan from Mr. Zang’s overtime pay to pay the 5,000-yuan fine demanded by the 610 Office.

Mr. Zang was detained for 15 days on May 28 this year. Later, he was sent to Dianzi Brainwashing Center in Laizhou. Huiquan School was fined 5,000 yuan because of this.

Ms. Ma Yuyan from Xiajiabao Township was arrested at night on September 22. Currently Ms. Ma and the taxi driver (a non-practitioner) Wang Ping are still being held in Baiqizhai Police Station.

Ms. Hu Nanling from Xinjian Township became homeless recently. Nobody knows where she is.

Ms. Hu was arrested in June 2012 and her house was ransacked. She was detained at Jinyun Detention Center.

Seven practitioners who live in the Zhongyuan District Ersha Residential Area were arrested in the afternoon on September 9. Currently Ms. Du Shenxi and Ms. Fang Xiuzhen are being detained at Zhengzhou First Detention Center. Nobody knows where Mr. Zhang Yanhui is.

Parties involved in the persecution: Feng Jinpeng (冯进朋), police officer who participated in the arrest: +86-13937122066

Ms. Liu from the Yubei District was arrested on the morning of September 18, 2013, and her keys were taken. She was later taken to Beibei Police Station. When police learned that her blood pressure was high, she was let go. While she was detained, her house was ransacked. Her Dafa books, materials, and pictures of Master were taken away by police.

Mr. Wang Ziting was arrested and taken to a detention center after he clarified the truth about Falun Gong.

Mr. Wang Xinchun is currently in Yichun City Jinshantun District Hospital. His face was beaten hard and swelled so much he could not open his eyes. He is unconscious.

Mr. Tan Fengjiang was arrested by police from his rental apartment in the evening on September 9. His computer and other personal belongings were taken away. Mr. Tan was detained for 15 days in Shangganling Detention Center. On September 22, Mr. Tan was transferred to Wuying District Detention Center, Yichun.