(Minghui.org) Shen Yun Symphony Orchestra delivered three performances in Texas on October 13 and 15: two at Jones Hall for the Performing Arts in Houston and one on at the Morton H. Meyerson Symphony Center in Dallas.

Shen Yun Symphony Orchestra, headquartered in New York, is composed of four conductors and over 100 musicians and vocalists. The program featured original compositions by Shen Yun, as well as classical European and contemporary American pieces.

Texas audiences were impressed with Shen Yun's original compositions, its unique interpretation of both Eastern and Western pieces, and ability to blend different cultures and styles through music. 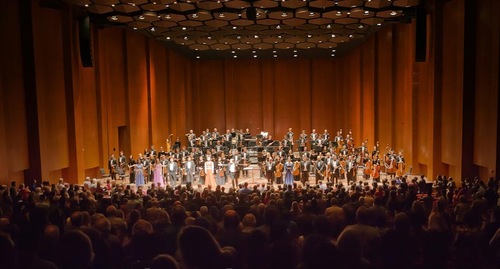 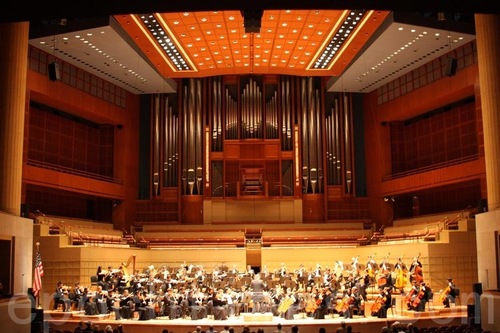 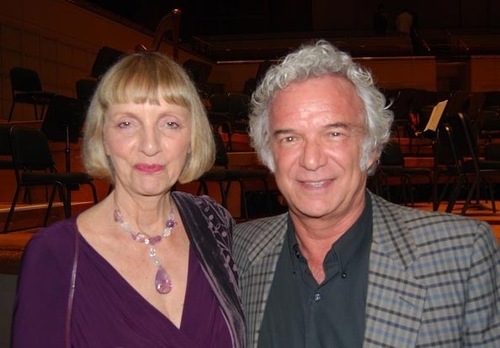 Scott Churchill (right), a psychology professor at University of Dallas and a film critic, was impressed by Shen Yun music's conveyance of profound themes in short pieces. (Photo courtesy of the Epoch Times)

Scott Churchill, a psychology professor at University of Dallas and a film critic, spoke highly of the original compositions of Shen Yun: “That’s the part that I’m most struck by. They are still humming in my head after they are over.”

Mr. Churchill especially liked how Shen Yun conveyed profound themes with short pieces: “I like [the original compositions]. They are beautiful. They are short and sweet. They deal with the divine, the heavenly creation, so I think it is impressive what they are addressing in such short pieces. You would expect a Western symphony to go on for an hour to deal with creation.”

Bill Levine, owner of a construction material company, and his wife Paula are classical music lovers. They attended the matinee in Houston on October 13.

Mr. Levine liked Shen Yun's original composition of Chinese music: “It was great, especially the Chinese music. I like that more than anything. The different blend of instruments... It is very emotional music, very strong, powerful, proud kind of music… I was emotionally involved in the Chinese part. I just felt different things like hope, spring, happiness, sadness, and pride. I really enjoyed that.”

Phyllis and Paul Peterson attended the Dallas performance. Mr. Peterson said that they had been to China and loved “the haunting sound of Chinese music.”

He praised Shen Yun's successful blending cultures through music: “I am enjoying it immensely! Tonight, the mixture here with the East and the West is... a fascinating mixture of sounds, cultures and styles. I am not the most emotional person in the world, but I feel emotions within me, and drawn in different ways. That’s the fascinating thing. There are so much so connected.”

He spoke about the diversity of Shen Yun music: “It would go Asian. But then very definitely this last conductor, you can almost hear the Russian-Bulgarian in him.”

Mr. Levine also connected Shen Yun music with his own cultural background: “We have a Jewish background. A lot of the Jewish music is very proud. Chinese music seems very proud and bright.”

Mr. Churchill appreciated the unique interpretation of Shen Yun Symphony Orchestra: “I like it very much. The blend of the East and West is great, particularly learning the Eastern interpretation of both the Western and Eastern music. It sounds different when hearing it played by this orchestra, even the familiar polonaise sounded.. there was a different spirit to it. I cannot put my finger on it yet. It was very enlightening!” 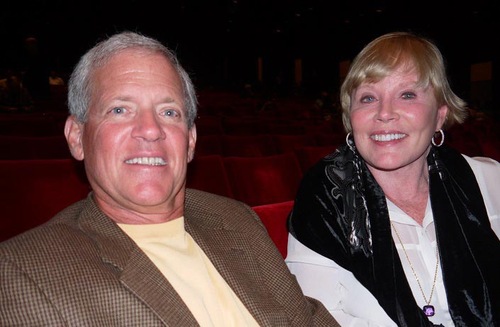 Linda and Tom Biery live in Houston and spend part of their year in Colorado, where they are very involved in a music festival. Mr. Biery owns an oil and gas business.

He commented: “Wonderful… particularly the oriental music and the instruments in the middle, Chinese instruments and the percussions in the middle of the back. That was great... [The music] was beautiful. It was very melodic and pretty.”

Mrs. Biery thought that the Shen Yun music was “emotional in a different way than so much of the classic music that I hear, which I also love, but this is very special to me... I was thinking how to describe it to our children, some of whom live in Houston. I could not really come up with a good comparison. But it is very special.”

Ms. Renner said: “I love the different instrumentations. How they have the theme by one of the instruments echoed by other instruments. It was just gorgeous.”

Musicians Put Their Spirit and Soul into Performances

Musicians in the Orchestra won rave reviews from the audience as well.

“I’m impressed with how into the performance the orchestra is. I mean, if you come to lots of symphonies, a lot of old musicians are kind of jaded. They are just going through the motions. But [Shen Yun musicians] are smiling when they are playing. They really put their spirit and soul into it. I like that aspect,” commended Mr. Churchill.

Shen Yun Symphony Orchestra is currently performing in Los Angeles and with upcoming performances in San Francisco. Following that, the Orchestra prepares for the 2014 Shen Yun Performing Arts worldwide tour.