(Minghui.org) From September 8th to the 16th, the Truthfulness-Compassion-Forbearance Art Exhibition was held in Salonica (also known as Thessalonica), the second largest city in Greece. More than 1500 people came to view the works. The largest local newspaper reported on the event in detail. More than 5000 people left comments on the show's website. A local TV station created a special program just for the exhibition: Every night at 11 for two weeks, there was a 10-minute report about the exhibit. 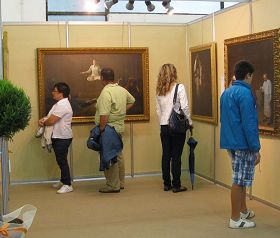 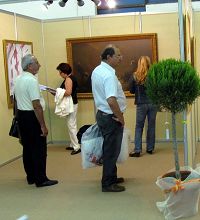 Several congressmen came to the exhibition. Falun Gong practitioners told them about Falun Gong and how it has been brutally persecuted China. They were shocked when they learned about the organ harvesting. Some of them had never heard about the persecution at all and said that they would pay more attention to it.

Several visitors learned the Falun Gong exercises at the exhibition and felt the positive energy. Many people came more than once and brought their friends and family. The viewers were amazed by the artworks. They were also disturbed by the brutality of the persecution. Two local Chinese businessmen that talked to the practitioners ended up quitting the Chinese Communist Party organizations.

A sampling of the many comments:

“I hope that the persecution will end soon and that Chinese people will have freedom of belief.”

“The art and colors are impressive. These artworks are so vivid.”

“This exhibition is amazing. Falun Gong friends are fighting for their rights by clarifying the truth. They are supported by the heaven. The artists are amazing. They are teachers and heroes. I salute these enlightened beings for their efforts and sacrifices to make a better universe. I thank you for teaching us a lesson with your lives.”

“Maybe one day I will follow you and help purify the world together. I will start with myself. I will cleanse myself first and then help clean the whole universe.”