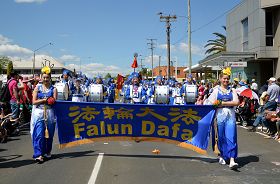 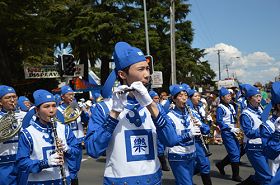 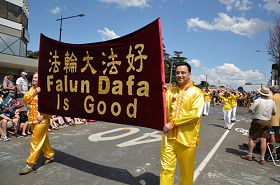 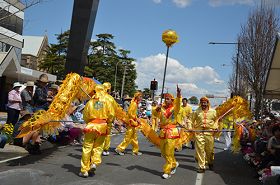 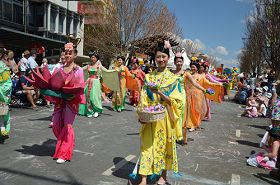 The Falun Gong contingent consisted of five groups: the Divine Land Marching Band, Celestial Maidens, waist drums, an exercise demonstration team, and the dragon dancers. More than 100 practitioners were involved. The spectators responded enthusiastically to their performances. Ms. Song, a member of the waist drum team, said, “I came to see the parade with a friend last year. I was surprised to see Falun Gong. There were so many people, including Australians, practicing Falun Gong here. This year I become a member of the waist drum team, because I have become a Falun Gong practitioner, too.”

Ms. Liu, the practitioner in charge of the waist drum team, said, “We started practicing for this parade a month ago. We practiced once a week. We want to share the beauty of Falun Gong with the public. The world would be a great place if everybody followed Truthfulness-Compassion-Forbearance.”

When the Falun Gong groups passed by the stage, the parade host said, “They are the largest and most diverse group in the parade. They can form a parade just by themselves alone.”