(Minghui.org) A monthly experience sharing conference in the greater Kaohsiung area was held at Dongguang Elementary School on July 29, 2012. Falun Dafa practitioners studied the Fa and shared their cultivation experiences in small groups in the morning. In the afternoon, all the practitioners gathered to share their experiences. Many participants learned from others and were inspired to progress more diligently in their practice. 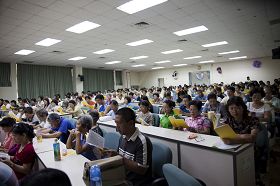 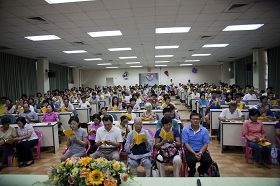 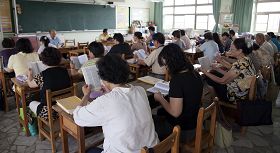 Practitioners study the Fa and share experiences in small groups 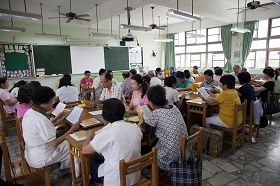 Ms. Hou's health improved dramatically after she began to practice Falun Gong in 2002. “My severe dry eyes prevented me from reading and using computers. My facial joints had deteriorated badly and I could not speak properly. I was withdrawn and helpless. After I read Zhuan Falun, I was able to talk. My health drastically improved, like I was reborn.”

Ms. Hou makes phone calls to China to clarify the truth. She encountered various challenges when talking with people over the phone, which helped her find her attachments. She kept her thoughts righteous and saved a lot of people. “One time a young man asked me how old I was. I avoided his question and continued to clarify the facts to him. He said that I sounded like an old woman and he wanted a young woman to talk to him. I did not like it but said to him peacefully, 'Thanks for respecting a senior person. You should know that it is better to listen to older, experienced people.' I quickly told him the beauty of Falun Dafa and the facts of the persecution in China. He quickly changed his attitude, quit the Chinese Communist Party (CCP) organizations, and thanked me for what I did.”

Looking Within After a Car Accident

Mr. Lin helps the local practitioners install and maintain the equipment they need to clarify the truth. One day a scooter came out of nowhere and hit his car. He looked within because he knew it was not an accident. He discovered an attachment: “A piece of equipment needed new software. I have been working on it for a long time and it was exhausting and tiring. I could not upgrade my xinxing and had been complaining about other practitioners.”

He found another attachment that he he had not let go: He had been working very hard at a power plant for years. There was an incident in which he saved a lot of money for the company. The general manager gave instructions in an official document to reward him but his supervisor did not follow up. Some of Lin's coworkers felt that he was mistreated. “I told others that I did not care, but it was not true. Another time there was a chance of promotion and in the end it was not me. I was very jealous.”

After the car accident, Mr. Lin said that he knew Teacher had shouldered a lot for him or he would have been in a lot more serious trouble. “For a long time, I did not treat myself as a true practitioner. I was fighting for personal interests. I did not look within and improve my xinxing, even though I was still doing the three things. The old forces exploited my gaps, which resulted in that car accident that caused me great loss in time and money.”

Ms. Zhuang learned Falun Dafa nine months ago. “Before I learned Falun Dafa, I had three related dreams. There were ships in an ocean. The first two times I did not get on the ship and was very sad. The third time I finally got on the Fa boat. On the boat, there were people of all races dressed in beautiful silk clothes. In contrast, I was wearing ratty clothes. I enlightened that I was a new practitioner and needed to clarify the truth and save people to earn mighty virtue.” Ms. Zhuang said that every time after she clarified the truth to tourists from China at a tourist spot, she felt calm and her mind was like still water, like nothing in the world could bother her anymore. She assimilated to Truthfulness, Compassion, and Forbearance.

Ms. Liu is a news editor. When she was five years old, she taught herself how to meditate. She levitated in the air when she was meditating. In April 2003, she learned Falun Dafa. At the time she had problems at home. She also witnessed practitioners fighting with one another in a discussion. She did not think that was cultivation and stopped practicing Falun Dafa.

After looking into other religions, she realized most of them did not require true cultivation of xinxing. The followers of the religions got along with one another and they seemed peaceful on the surface, but most of them were pursuing something. She realized the beauty of Falun Dafa and how precious it was. She was more sure than ever that Falun Dafa was true cultivation. “I returned to Falun Dafa in May 2010. Teacher knew that I was behind and arranged for me to be around a lot of diligent practitioners. I was able to learn a lot from them and progress a lot.”

My Good Fortune to Be a Practitioner

Professor Chang worked at National Sun Yat-Sen University. After watching a movie about doomsday, she began to practice Falun Dafa, wanting to escape that. Now her entire family practices Falun Dafa. She watched Shen Yun's performance in 2009 and she remembered her vow. She cried right then. She thanked Teacher for giving her a chance.

Ms. Chang helped promote Shen Yun. “That was my first time and I was still afraid. I worried that my students would think that I was forcing it upon them. In the end, I bought the tickets and gave them to my students.”

Through constant Fa study, she felt the urgent need to promote Shen Yun. When she promoted the tickets, she always held the thought: “Wake up now and remember your vows. Shen Yun is here to save you. The tickets are like tickets to board Noah's Ark.” In the end, most of her students, other teachers, company salesmen, and visiting scholars, bought tickets. This year, over 100 of her friends and family members saw Shen Yun together.