(Minghui.org) A Minghui reporter interviewed researcher Ms. Tian (alias) at China’s Ministry of Education. Ms. Tian has studied the sociology of Chinese families in recent years, and she is also a Falun Gong practitioner. Below are the highlights of their conversation.

Reporter: I heard that you made some breakthroughs in your research.
Ms. Tian: Well, I collected 100 published cases of family dynamics, and examined how the interaction between mother-in-law and daughter-in-law affected the overall happiness of each family.

Reporter: You indicated that you gathered information from about 100 families. Where do these families come from?
Ms. Tian: Eighty-three families are from China, twelve from Taiwan, and five from other countries around the world. These families share two common characteristics. The first is that the mother-in-law/daughter-in-law relationships were all tense to begin with, yet they later became harmonious. The second is that these are all modern families that practice Falun Gong.

Reporter: Can you give some examples?
Ms. Tian: Sure! Let me first give you an example from China. The daughter-in-law’s name is Feng Hua and below is her own account.

“When I had my first daughter in 1986, my mother-in-law didn’t take care of me or my newborn as other mothers-in-law would do. In the years that followed, she not only refused to help me care for my child, but also demanded that my husband and I increase her stipend from 120 yuan to 200 yuan. As a matter of fact, she didn’t even ask for a penny from her other children. When I argued with her, she said we just had to give her the money. I could no longer put up with it and fought with my husband whenever he wanted to help her financially.

“One year when my husband went to celebrate his mother’s birthday, his older brother and younger brother wouldn't let him go inside and gave him a good beating instead. Outraged, he smashed all the windows. My mother-in-law sued us in response. I said to my husband, “How about we file for divorce? I no longer want to cause any tension between you and your mother.” He cried, “I’m so sorry that you married me and have had to suffer through all of this.” I began to weep as well. Just when we were discussing what to do in the future, a village official unexpectedly stopped by, informing us that my mother-in-law had withdrawn her lawsuit.

“In early 1996, another village official told me about the miraculous healing effects of Falun Gong and also gave me a book to read. I thus began my practice of Falun Gong. Gradually my hatred of my mother-in-law melted away. I consulted with my husband and said, 'I now practice Falun Gong and know how to conduct myself. Since your siblings don’t want to take care of your mother, why don't we invite her to live with us?' He immediately said no. I was not deterred and kept talking about Dafa principles to him for three months. In the end, he agreed to have his mother live with us. I cleaned up the house to welcome her. She said emotionally, 'I’d never have dreamed of this day.' My mother-in-law has now been with us for more than ten years and she’s enjoying good health and a happy life.”

Reporter: This is a very exemplary case. [do you have] an example from Taiwan?
Ms. Tian: Yes. This Taiwan daughter-in-law’s name is Liao Xiuzhen. The dynamics in her family were also representative.

Liao’s mother-in-law was previously overbearing, and she had a quick temper. She always got her way and didn’t tolerate any differing opinions. She developed depression and later had to rely on medication to control her symptoms. Even so, she often claimed she wanted to commit suicide.

Liao never had direct conflicts with her mother-in-law, yet there was plenty of disharmony between the two women. Because of the stress she felt in the family, Liao wasn’t able to conceive - even after six years of marriage. Unable to stand living with her mother-in-law any longer, she and her husband moved away, and she got pregnant just half a year later. 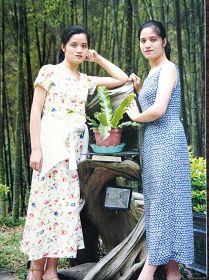 When Liao received a copy of the book Zhuan Falun from her younger sister in 2003, she treasured it greatly and finished reading the entire book in just two days. From then on she has never put the book down. She began to try to understand her severely depressed mother-in-law and treat her as if she were her own mother. Later on her mother-in-law held her hands tightly and said, “No one ever treats me sincerely, yet you truly care about me from the bottom of your heart.” The two women have since become good friends who enjoy each other’s company.

Reporter: You said five families are from other countries. Can you give one such example?
Ms. Tian: Of course. Actually the relationship between mother-in-law and daughter-in-law is a worldwide universal dilemma. This family is from Europe, and the daughter-in-law is named Ginny.

Prior to her cultivation, Ginny dreaded the hours between 6 in the evening to 10 the next morning since that was when her mother-in-law was back from work and stayed at home with her. She didn’t know what to say to her mother-in-law, except for routine greetings. She felt uneasy whenever the two sat together and always thought of ways to leave the room. Those few years she was very moody and felt extremely tired. She was always on her guard. In her own words, the family environment was not friendly, and she was always ready to start a conflict.

Ginny later began practicing Falun Gong at the recommendation of a good friend. She decided to become a better person. Her cold heart began to thaw, and she became kinder and more considerate and calm. She now even washes her mother-in-law’s clothes, which was impossible in the past because she never touched anything of her mother-in-law’s. At the same time, her mother-in-law treats her fondly and sometimes buys jewelry for her. The two women now behave as if they were mother-and-daughter.

Reporter: So all three daughters-in-law began to see things differently after they picked up the practice of Falun Gong, right?
Ms. Tian: Absolutely. The direct cause of the improved relationship between these mothers-in-law and daughters-in-law was that the younger women had a new understanding of conflicts and subsequently behaved differently. As a result, things turned around for the better. In a nutshell, these daughters-in-law have successfully managed to optimize their mindsets through cultivation.