(Minghui.org) The Independence Day parade in Montville, New Jersey was held on the morning of June 30, 2012. Many people watched it in person. The Divine Land Marching Band, consisting of Falun Dafa practitioners, was the largest Chinese band in the parade. 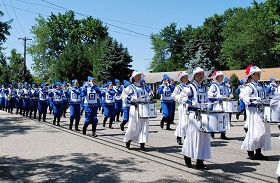 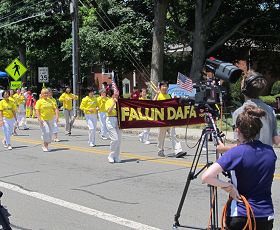 Lisa, a spectator who was watching the parade with her kids, said that the band members’ costumes were beautiful and the music performance was outstanding. A couple of Indian origin commended the band's lineup being huge, and "really great." Upon receiving the Falun Gong leaflets, some of the audience immediately browsed the Internet with their smart phones to learn more about Falun Gong.

There were also many Chinese spectators, who felt pride for the large Chinese band in the parade. An older couple from China, who were in the United States for a short visit, watched the parade. The gentleman said, “It was my first time to watch such a large-scale parade of Falun Gong.”

The Independence Day parade in Randolph, New Jersey was also held in advance, on June 30. It was one the largest parades in the state. Nearly 60 groups participated in the parade. House representative