(Minghui.org) Falun Gong practitioners in Sydney, together with local government officials and other supporters, held a rally at noon on July 20, 2012 outside Sydney Town Hall. Their goal was to raise people's awareness about the 13 years of brutal persecution by the Chinese Communist Party (CCP), and call for an end to the persecution. 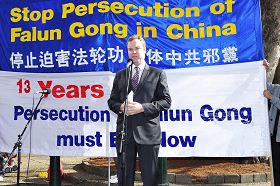 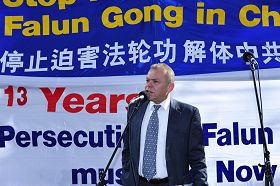 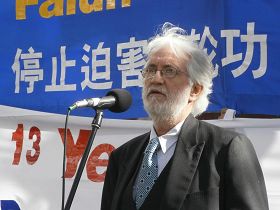 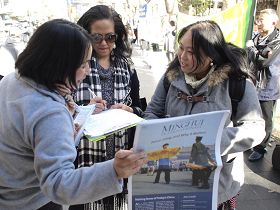 People listen to the facts about Falun Gong 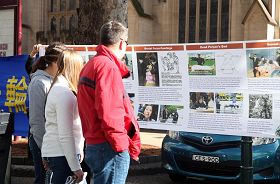 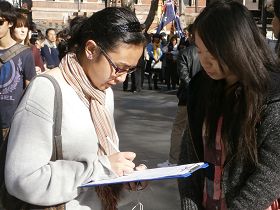 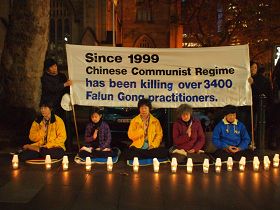 Jamie Parker, MP of New South Wales (NSW), has been to China before. He shared his personal experience at the rally. He said, “I visited China several years ago. I went to Tiananmen Square, and witnessed a brutal scene. I saw people holding banners supporting Falun Gong. The police and armed police attacked and hit them hard, and then dragged them into police vehicles.” MP Parker believed that human rights should be a matter of primary importance, but upholding one's spiritual belief is even more important.

Canterbury Councillor Michael Hawatt stated that we can easily see in the everyday media that people are persecuted in China. Their organs are forcibly removed. Human rights can't be sacrificed for the sake of trade. He believed that only if the governments of different countries make some constructive efforts, can this problem have a better solution. They should pressure the CCP and ensure that it no longer mistreats its people.

Jeff Lee MP sent a letter praising Falun Gong practitioners for their contributions to the community and for spreading the principles of Truthfulness-Compassion-Forbearance.

Ms. Bao Kan, head of a Vietnamese Radio Station, said that Vietnam and China are both communist countries which have made their people live miserably. Under the totalitarian rule of the CCP, Falun Gong practitioners have been subjected to the same suffering.

Human rights activist Bob Vinnicombe said that the United Nation's Security Council should examine the human rights atrocities of the Chinese authorities. They cruelly harvested organs from living Falun Gong practitioners and other prisoners of conscience. The CCP's evil influence must be resisted, as it is a wicked totalitarian state. He said that the Berlin Wall collapsed after 45 years, the East German people ushered in their own freedom. He believed that the communist red walls that suppress and restrict the Chinese people will also be pulled down. “Long live the spiritual movement of Falun Dafa!” “Long Live Freedom!”

Linda from Beijing said that after she came abroad, she saw Falun Gong practitioners raise awareness about the persecution in a variety of ways. She often received informational brochures from practitioners. She admires practitioners' perseverance, and feels that Falun Gong is remarkable from the bottom of her heart.

Mr. Jia from Guangdong Province believed that having faith is everyone's freedom. What the CCP persecutes is not only people of faith, but universal values.

Mr. Hong made a special trip to take part in the rally. He said, “Falun Gong practitioners believe in Truthfulness-Compassion-Forbearance. The CCP persecutes such good people, because the CCP advocates falsehood, evil and struggle. It is against humanity.”

He also talked about the CCP's atrocity of harvesting organs from living practitioners, saying, “The CCP is too evil, it's very true that Heaven will eliminate the CCP.”