(Minghui.org) Hanyang has a long history. It was the first city established in the Wuhan area and is an auspicious place as the birthplace of great men.

In the spring of 1993, Master Li Hongzhi came to Wuhan to lecture on the Fa. Numerous predestined people from Hanyang attended the class. The joy of learning the Buddha Fa was beyond words, and they could not wait to spread the good news among the local people. Doctor Wang and others went to Red Square and hung up banners introducing Falun Gong. They also demonstrated the exercises. Many predestined people began cultivating Falun Gong in Wuhan at this time.

In September 1993, Master again lectured in Wuhan. When this became known, many people from Hanyang who had heard about Falun Gong also came to Wuhan. Shortly afterwards, many more people began practicing Falun Gong, and the exercise site moved from Red Square to Guqintai, which became the first group Fa study and exercise site in Hanyang.

Guqintai is a historic scenic location very popular with tourists. Many came to visit the exercise site and ask questions about Falun Gong. Practitioners welcomed them and patiently explained things. Many of them felt at ease when they came, as if the anxieties and frustrations of the mundane world had been lifted, and they liked to stay at the exercise site. Practitioner Xiao Hai was one of those who practiced Falun Gong and was fortunate enough to attend Master's last Fa lecture in China.

For those who had already attended Master Li’s classes, they were deeply aware of Dafa’s goodness and enthusiastically promoted Falun Gong to their family and friends, and, through word of mouth, more and more people came to learn Falun Gong. In 1995, exercise sites sprang up like bamboo shoots after a spring rain: at Red Square, the Zoo, Yaoluti, Qingchuange, Lianhuahu, and Qilimiao.

“Dafa is being spread far and wide. Those who hear about it are looking for it. Those who have obtained it are delighted with it. The number of cultivators is increasing daily and becoming countless.”

(“Seeking Discipleship with Teacher” from Essentials for Further Advancement)

Dafa practitioners from Hanyang were of all ages: seniors over 80, the middle aged, young adults, and children. They came from all walks of life: officials, physicians, engineers, teachers, and college students. They were able to study the Fa, do the exercises, and share experiences in this pure land of Falun Dafa.

From 1993 to July 20, 1999, the exercise sites increased to a total of eleven, and many more people were practicing at home.

Before 1995, practitioners from the Hanyang Qintai exercise site would listen to one of Master's recorded audio lectures after the group exercises. After the lecture, they would discuss and share their experiences.

Master published his book Zhuan Falun in 1995. At the time, copies of the book were scarce, with only two or three books per exercise site. People took it in turn to read the book. Many people couldn’t wait to read the book, so after the exercises, one practitioner would read the book and others would listen intently.

The books quickly arrived and soon all the practitioners had a copy of Zhuan Falun. From that point on, after the exercises every night, they would light up a lamp and study together. Sometimes one person would read while others listened, and sometimes people took turns reading a paragraph at a time.

As more people came, the Fa study moved indoors, and the practitioners were divided into several study groups. Some exercise sites studied two to three times a week, some studied daily. They read Zhuan Falun over and over.

After a period of time, when there were a number of newcomers, everyone would watch Master's nine-day lecture series on video. Everyone compared their Fa study and cultivation and encouraged each other to be diligent.

After the persecution began, the CCP slandered us, saying that we were an organized group, but as a matter of fact, we had no organization whatsoever; we had just benefited so much from Dafa that we wanted others to benefit as well.

Xiao Yue was only in her 30s when she was hospitalized with hepatitis B. Her illness was beyond cure and she had lost all hope. She heard that qigong could cure diseases, so she came to learn Falun Gong, giving her a glimmer of hope. After an introduction, she began to practice Falun Dafa. Initially, her husband transported her to the exercise site by bicycle. After she finished watching Master's lecture series video, she was discharged from the hospital. Three months later, she was completely recovered and even went back to work. Her family, co-workers, and friends all witnessed the wonder of Dafa and also came to learn Falun Gong.

When Xiao Yue went home for the holidays, she introduced Falun Gong to her mother, Ms. Gui, and left her the book Falun Gong. Her mother had never gone to school and did not recognize many characters, but she could read the book as soon as she picked it up, which surprised her. “How was I able to read and understand the book with my limited reading ability?” she asked. The more she read the book, the more she wanted to read it, and the better she felt. She decided to exercise at the Qintai exercise site. Before she began practicing Falun Gong her health was poor. She had had most of her stomach removed and could only eat a small amount each meal. She also had severe arthritis, which was very painful. She had visited all kinds of hospitals in Wuhan but could not find any relief. After she began practicing Falun Gong, all her illnesses miraculously disappeared.

Her neighbor, Lao Zhu, saw her come and go full of energy and asked her what had happened to her. When he heard that it was the wonder of Dafa, he joined Ms. Gui at the exercise site. He had had a stroke in the past and when he came to the site the first day, he needed a walking cane. The next day, he threw away the cane. Ms. Gui felt that Dafa was great, and she wanted to tell others and let more people benefit. She lived on the first floor and she set up the video of Master's Fa lectures on her balcony. Many people came to watch and wanted to do the exercises. Later they went to the square near Hanyang Railroad Station to do the exercises. As Ms. Gui had just become a practitioner two weeks before, there were many questions she could not answer, and many newcomers’ movements needed to be corrected. She was worried, but when some veteran practitioners learned of the situation, they quickly came and helped with the Fa study and doing the exercises.

Dafa spread quickly by word of mouth. Without personal experience, who would advise family members to come to learn Dafa? People all knew the best gift to anyone was telling them about Dafa. From 1992 to 1999, Dafa spread uninterrupted.

In the spring of 1999, there were group exercise sites everywhere in Jiang Cheng, Wuhan. Practitioners wore yellow exercise outfits, their movements were in unison, and they displayed a peaceful demeanor. In May, at the Lantern Festival in Lianhuahu Park in Hanyang, there were large numbers of people. Hanyang practitioners decided to take the opportunity to spread Dafa. After dinner that night, everyone came. So as not to affect the crowd, they lined up from Red Square all the way to the entrance of Lianhuahu Park. Practitioners from Hankou also came to participate. They began to exercise in unison. Hanyang folks remember it vividly, even today. I remember my co-workers telling me at the time, “Those practitioners all spoke calmly and politely; they treated others like family.”

After the spring of 1999, Hanyang practitioners went out spreading Dafa every weekend. Rain or shine, they did group exercises, introduced Falun Gong, and let more predestined people obtain the Fa.

A new practitioner from Hanyang Paper Mill thought that Dafa was great. He wished that more people could come to learn Falun Gong. He asked practitioners in Hanyang to present Dafa in his factory. That weekend, two busloads of practitioners went to the factory. We quickly lined up for group exercises. Later, the new practitioner told us that many people from his factory saw this and started to practice Falun Gong. We were then more confident and went there often to establish an exercise site and correct exercise movements.

Fa Conference in the Rain 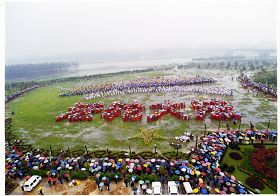 On April 11, 1999, 7,000 Wuhan practitioners arranged themselves into the characters for “Falun Dafa” and held their Fa conference in the rain. The Fa conference was held in Hanshui Park, a new park near the river, with a large lawn area where the practitioners arranged themselves into four large characters that read “Falun Dafa.”

That morning, as I left early, I could hear muffled sounds of thunder in the sky and it soon began to rain hard. When I arrived at the park, the practitioners from Xishui were already there from the previous night. They were there to protect the signs that had been arranged the night before. (When we had previously arranged to display characters, our signs were stolen overnight.) Thunder and lightning continued and it rained harder and harder. We went to check the arrangement of the characters; they were all there.

The weather started to break, but it was still raining. Umbrellas of all kinds moved to the park like rotating Faluns. More and more people came, and practitioners spontaneously maintained order. It was very quiet and orderly.

I remember one tall male practitioner carrying two young practitioners. They had come from Hannan. He was wet from head to toe and so was his sister, but the kids were dry. I heard that the youngsters insisted on coming, and, with their family's consent, they all came.

The receiving signal for the sound system at the conference was poor, and the line had to be held up high to make it work. One practitioner named Zhu held the line up with a long stick for the entire conference.

Practitioners arranged themselves into the four Falun Dafa characters quickly, and in the rain, they seemed so solemn and extraordinary. Everyone present was deeply moved. We heard the loud sound of thunder in the sky again, but no matter what might have happened, we were determined to firmly follow Master. That sound shook heaven and earth.

The Fa Conference was successfully concluded as scheduled, despite the heavy rain. Even though it rained hard, everyone stood quietly in the rain, and everyone was sharing from their heart. The atmosphere was one of harmony. After the experience sharing, the exercise music began, and seven thousand practitioners began exercising in the rain. I saw an older man standing in the rain. I took him under the roof. I began doing the second exercise, holding the wheel, in the rain. Spring rain still carried a sense of coldness, but I did not feel cold. To me, the drops didn’t feel like rain, but numerous Falun.