(Minghui.org) Mr. You Benyu is a practitioner from Su-ao township, Yilan County, Taiwan. He started practicing after hearing about the April 25 Peaceful Appeal in 1999. He said, “I remember first hearing about the appeal. They didn't shout slogans, bring protest materials, or throw things. Instead, they waited in line, and some did the exercises. I thought that was interesting, and wondered how effective the appeal was. I also thought that under the communist system, even protesters acted strange.” “However, I also heard that when they left, they did not leave any trash at all. Even cigarette butts discarded by the police were picked up. I was very surprised, so I thought I should find out what Falun Gong was really about.” 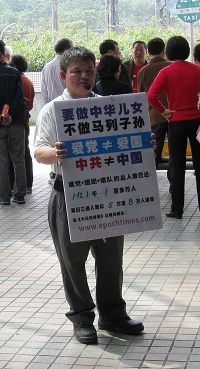 Mr. You later went to a bookstore and bought a set of videotapes of the Guangzhou lectures. He finished viewing them within a few days. The night after he watched Lecture One, he dreamed a Falun was rotating in his abdomen. He tried to see it more clearly in the dream, but did not get a clear picture. A few days later, at lunch break, he saw a Falun again. This time, he could see clearly the srivatsa in the center of the Falun. He was quite amazed. He said, "That was how I became a practitioner. I stopped drinking alcohol and my temper became much milder. My health also improved. I now feel very energetic." He came as a beneficiary of Falun Gong, wanting to share with others what he gained.

Prior to taking up the cultivation practice, Mr. You was rather pessimistic. He was interested in fortune telling. He was quite adamant that one's fortune was fixed, and nothing could be done to change it. He read in Zhuan Falun,

“As a practitioner, your path of life will be changed from now on. My fashen will rearrange it for you.”

At first, he didn't quite believe this was possible. A few days later, a friend who had not seen him for some time told him that his facial look had undergone a favorable change, which indicated his change of fate for the better. He knew that cultivation could change one's fortune, and even others could see this. He felt the sense of freedom for breaking out of the restraint of pessimism.

On April 25, 1999, over 10,000 Falun Gong practitioners went to Zhongnanhai, the central government compound in Beijing, to appeal for abuses that took place in the nearby municipality of Tianjin. There was extensive media coverage of this event, which brought Falun Gong to the world. On July 20, 1999, Jiang Zemin regime launched a large scale campaign to suppress Falun Gong. Practitioners across the mainland endured severe persecution. Taiwan media's reports on the suppression made Falun Gong a household term in Taiwan. Because of its health effectiveness, its emphasis on virtue and kindness, as well as its free instructions, Falun Gong has spread far and wide by word of mouth. Its popularity overseas is something the Chinese Communist Party (CCP) has never expected. 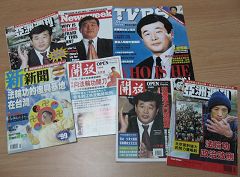 Extensive coverage of the April 25 appeal by Taiwan media

After the persecution started, Taiwan became one of the primary venues where calls for stopping the persecution picked up strength. Local media called it the “base of the restoration of Falun Gong.” A Falun Gong practitioner estimated that the number of practitioners in Taiwan tripled in 18 months after the start of the persecution. He explained that many people did not buy into the CCP lies. On the contrary, more and more people walked into Falun Gong after they found out the truth.

Making Regular Trips to Hong Kong to Clarify the Facts

For over a decade, practitioners around the world have made use various channels to help people in China learn the facts about the persecution, and to avoid being misled by the CCP lies and propaganda. Mr. You Benyu took part in this meaningful endeavor. At first he sent emails and news briefs. In March 2004, he started going to Hong Kong to present the facts. He took advantage of the convenient work schedule and made 18 trips during the first two years, spending a total of 150 days there. An average trip lasted about a week.

Mr. You has observed that many tourists from China are interested in Falun Gong facts. He remarked, “Some were very attentive. After reading the content of one full board of facts, they ask me to turn the board over so they can read the other side. Many were moved to tears. Some raised their thumbs to me. Some bowed deeply. One tourist got off the shuttle and wanted to pose for a picture with us and to take the picture back to her mother, who persevered in practicing Falun Gong despite the harsh environment. I have seen the significance in what I am doing there.”

In 2005, Mr. You was thinking it would be better if he could spend more time in Hong Kong. Coincidentally, he changed jobs. The monthly salary was about 10,000 NTD lower, yet the schedule was more flexible. He was able to spend two weeks in Hong Kong while working in Taiwan the other half. On one occasion, the manager could not understand what took him to Hong Kong every month. After he explained the crimes of CCP's live organ harvesting to the manager, the manager turned very supportive.

A Unique Scene at the Su-ao New Station

Typhoon Megi, one of the most intense tropical cyclones on record, caused severe collapse in sections along the Su-ao-Hualian Expressway in October 2010. Tourists from China traveling from Hualian to Taipei all have to transit to the train at Su-ao New Station in Yilan county. Since then, Mr. You and other practitioners in the county have stationed themselves there every day to seize the few minutes that tourists from China have during their travel, to present them with facts about Falun Gong.

Every day at noon, it is not uncommon that over 1,000 tourists from China travel to and from Hualian via this railroad station. When they walk out of the station, the first thing they see are banners that read “Falun Dafa is Great” and “The World Needs Truthfulness-Compassion-Forbearance.” One railroad police officer was moved by the practitioners selfless devotion. He advised the practitioners to hang the banners on the top floor of a residential building, which has become a rather unique scene at the Su-ao New Station.

Practitioners gather at the exits of the railroad station before a train arrives, holding placards with Falun Gong facts. Some tourists from China take pictures, some give a thumbs-up, some applaud, and some express their appreciation for the practitioners' hard work. Some have pressed their palms together and told the practitioners that they have quit the CCP and its affiliated organizations. Many have taken photos with excitement.

Mr. You Benyu is confident that people from mainland China will one day regain their freedom of belief, and he and other practitioners are determined to continue working hard for the early arrival of that day.