May 24, 2012 |   By a Minghui correspondent from Heilongjiang Province, China

On the evening of March 13, 2012, while Mr. Huo was visiting practitioner Ms. Guo Jinfen at her home, some police cars drove up to the house. Mr. Huo and Ms. Guo refused to open the door, but the police did not leave. At 3 p.m. the next day, the police threatened to break down the door. The police soon illegally arrested Mr. Huo, Ms. Guo, and her child, who is a middle-school student. Officers also ransacked the house and confiscated a computer and other personal belongings.

At around 10 a.m. on April 5, 2012, Mr. Huo's brother and sister-in-law arrived at the Jiamusi City Police Department from another city to try to determine Mr. Huo's whereabouts, since he was missing and his entire family worried about him. His family had not been notified of his arrest.

Practitioner Ms. Wang Yanxin and Ms. Xu Shulan came to the police department with Mr. Huo's brother and his sister-in-law. The group was told to return at 9 a.m. the next day. After they left, they went to practitioner Ms. Wang Qingrong's home. The police followed them there, and at around 11 a.m. that same day, officers from the Jiamusi City Police Department and the Qianjin Police Department broke into Ms. Wang Qingrong's home. The police took pictures and video recordings, and dragged everyone downstairs. They arrested Mr. Huo's brother and sister-in-law, Mr. Yin Guang, Mr. Hou Deqing (Ms. Wang Qingrong's husband), Ms. Wang Yanxin, Ms. Xu Shulan, Ms. Li Guifang, and Ms. Wu Qilian and her husband (a non-practitioner).

Ms. Wang Qingrong was not taken away because she lost consciousness. The police ransacked her home and confiscated all of the Falun Gong books and many other personal belongings. Mr. Yin Guang's identification cards, bankbook, and car were also confiscated.

At around 2 p.m. that same day, witnesses saw Ms. Li Guifang being carried out of the police department by four police officers. Ms. Li, Ms. Wang Yanxin, and Ms. Xu Shulan were taken to the Jiamusi Cancer Hospital and then to the Jiamusi Tuberculosis Hospital for checkups. The witnesses said that Ms. Li was very weak. The practitioners were then brought back to the Qianjin Police Department.

The whereabouts of Mr. Huo's brother and sister-in-law are unknown. The others are detained at the Jiamusi Detention Center.

In 1999, Mr. Huo went to Beijing to appeal for the right to practice Falun Gong. In 2000, he was sent to a forced labor camp, where he was brutally tortured. On November 3, 2000, he and 11 other practitioners escaped from the labor camp. He has since lived his life in exile.

In 2000, a 17-year-old practitioner, who was at the time detained at the Jiamusi City Detention Center, witnessed Mr. Huo being tortured. When Mr. Huo held a hunger strike to protest the illegal detention, the guards put 50-pound steel chains on him and force-fed him twice every day. This kind of torture continued for more than 10 days.

Wu Zhe, division chief of the Jamusi City Police Department, directly ordered and participated in the interrogation of Mr. Huo. Guards fumigated him with cigarettes, put bullets between his fingers and then squeezed his hands tightly to cause him extreme pain. 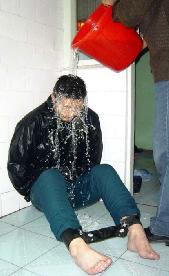 In 2005, Mr. Huo was sent to the Hegang City Second Detention Center. He was locked inside a steel cage and tortured with various means. His face and ears were burned with cigarettes, and he was kicked and had cold water poured all over his body while being exposed to the cold outside. Despite these tortures, Mr. Huo never gave up his belief. 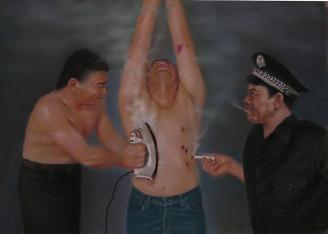 Practitioners Arrested for Helping to Look for Mr. Huo

After Mr. Huo's brother and sister-in-law learned of his arrest, they came to look for him and hoped to rescue him. They asked local Falun Gong practitioners for help, because they knew that practitioners cared about him, too, even though they did not know each other very well. However, some of these practitioners, including Ms. Wang Qingrong's husband, Mr. Hou Deqing, Ms. Wang Yanxin, Ms. Xu Shulan, Ms. Li Guifang, and Ms. Wu Qilian, were arrested for trying to help the family locate Mr. Huo's whereabouts. Ms. Wu Qilian's husband, Mr. Yin Guang, who is not a practitioner, was arrested as well.

Ms. Wang Yanxin, 49, is a retired clerk from a shopping center. She was a model worker for many years. When a reporter interviewed her in 2003 and asked her where her kindness came from, she told the reporter, “My kindness is from Falun Gong. I began to read the book Zhuan Falun in 1998, and I follow the principles of Truthfulness-Compassion-Forbearance. My behavior is naturally like that because of the practice.” When Ms. Wang's brother suffered a cerebral hemorrhage and was unable to take care of himself, Ms. Wang cared for him. He is now left without any care.

Ms. Wu Qilian was a chief nurse at the employee hospital of the Jamusi Meat Processing Company. After she began practicing Falun Gong, her two missing rib bones grew back. Many called it a miracle. In 1999, when her company had to lay off employees, she volunteered to give her position to another employee. Many of her colleagues said, “In today's society, only Falun Gong practitioners still think of others.”