(Minghui.org) May 13, 2012 marked the 20th anniversary of Falun Dafa's introduction to the public by its founder, Master Li Hongzhi. A week ahead before World Falun Dafa Day, practitioners in Melbourne held a large group practice in two different parks to respectfully wish revered Master a happy birthday and display the wonderfulness of Falun Dafa to people. There were practitioners in their 80s, and a 4-year-old practitioner. Some Western practitioners have cultivated in Dafa for more than ten years. Another practitioner just successfully escaped the persecution in China and arrived in Australia a few days earlier. The peaceful exercise scene impressed many passersby.

On May 13, practitioners in Melbourne do the exericses in a large group in Birrarung Marr Park 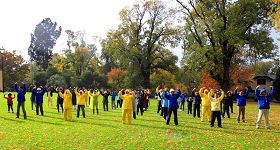 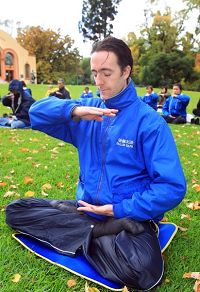 On May 13, practitioners in Melbourne do the exercises in a large group in Fitzroy Garden

Ms. Lan from Northeast China said, “I'm very emotional today. Falun Dafa teaches people to be good, and cultivates Truthfulness-Compassion-Forbearance, but in China, it has been subjected to brutal persecution by the Chinese Communist Party (CCP) since July 20, 1999. But Falun Dafa hasn't been eliminated; on the contrary, it has spread to more than 100 countries around the world. More and more people have recognized the beauty of Falun Dafa. So we can celebrate on such a special day-- the 20th anniversary of Falun Dafa's introduction to the public. We hope everyone in the world will know Falun Dafa is great.”

She added, “Thousands of words fail to express my gratitude to revered Master. If it hadn't been for Falun Dafa, I wouldn't have lived such a happy live. I may have gone along and headed toward destruction. Thank you, Master!”

Mr. Sun, who used to be an elementary school principal.\ in China, said, “We joyously celebrate today because it is World Falun Dafa Day and our esteemed Master's birthday. We are delighted, and I will redouble my effort to do well in the future.”

It happened to be the rainy season in Melbourne, but practitioners persisted in doing the exercises amidst rain showers, which attracted a groups of tourists to stop to watch. A tourist from Fujian Province took photos while saying to his companions loudly, “I know, Falun Gong is good!”

Mr. Seigei Suetin, a Russian Australian senior piano teacher and his wife were also drawn to the peaceful exercise field. They took informational materials and Mr. Suetin told the reporter that his family had been persecuted by the Soviet Communist Party, and he knew the evil nature of the communism. He supported freedom of beliefs. He finally said that he would get online to learn more about Falun Gong.