By Cai Ju in New York

(Minghui.org) May 13, 2012, a great day that Heaven and Earth celebrate together, marks the 13th World Falun Dafa Day and also the 20th anniversary of Falun Dafa's introduction to the public. It is even more a wonderful day because it is compassionate and great Master Li Hongzhi's 61st birthday. On this day, more than 7,000 Dafa disciples from over 40 countries in America, Europe, Asia and Oceania, gathered in the Westchester County Center in New York to solemnly hold the 2012 New York Falun Dafa Cultivation Experience Sharing Conference. 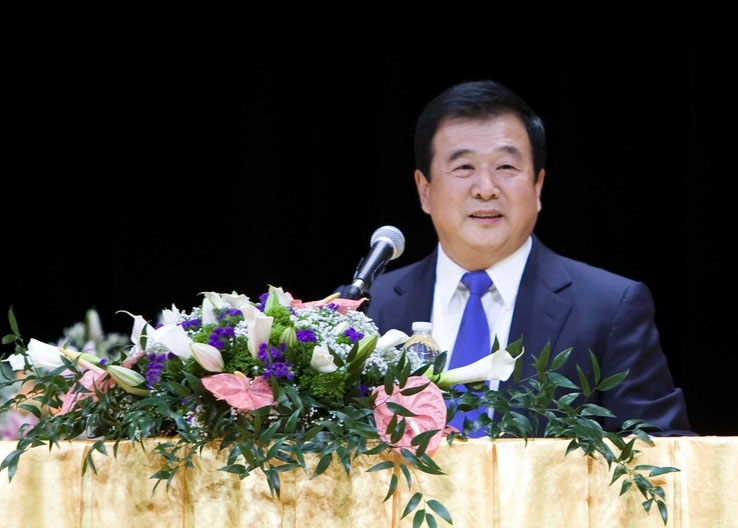 Revered Master comes in person to the New York Fa conference, and teaches the Fa for 7000 Dafa disciples

Around 10:00 a.m., revered Master came to the conference. The disciples stood up with respect, and warmly applauded for a long time. Revered Master motioned everyone to sit down, and taught the Fa for about one hour. Some disciples were so excited that they cried, and tears of gratitude were streaming down their faces. 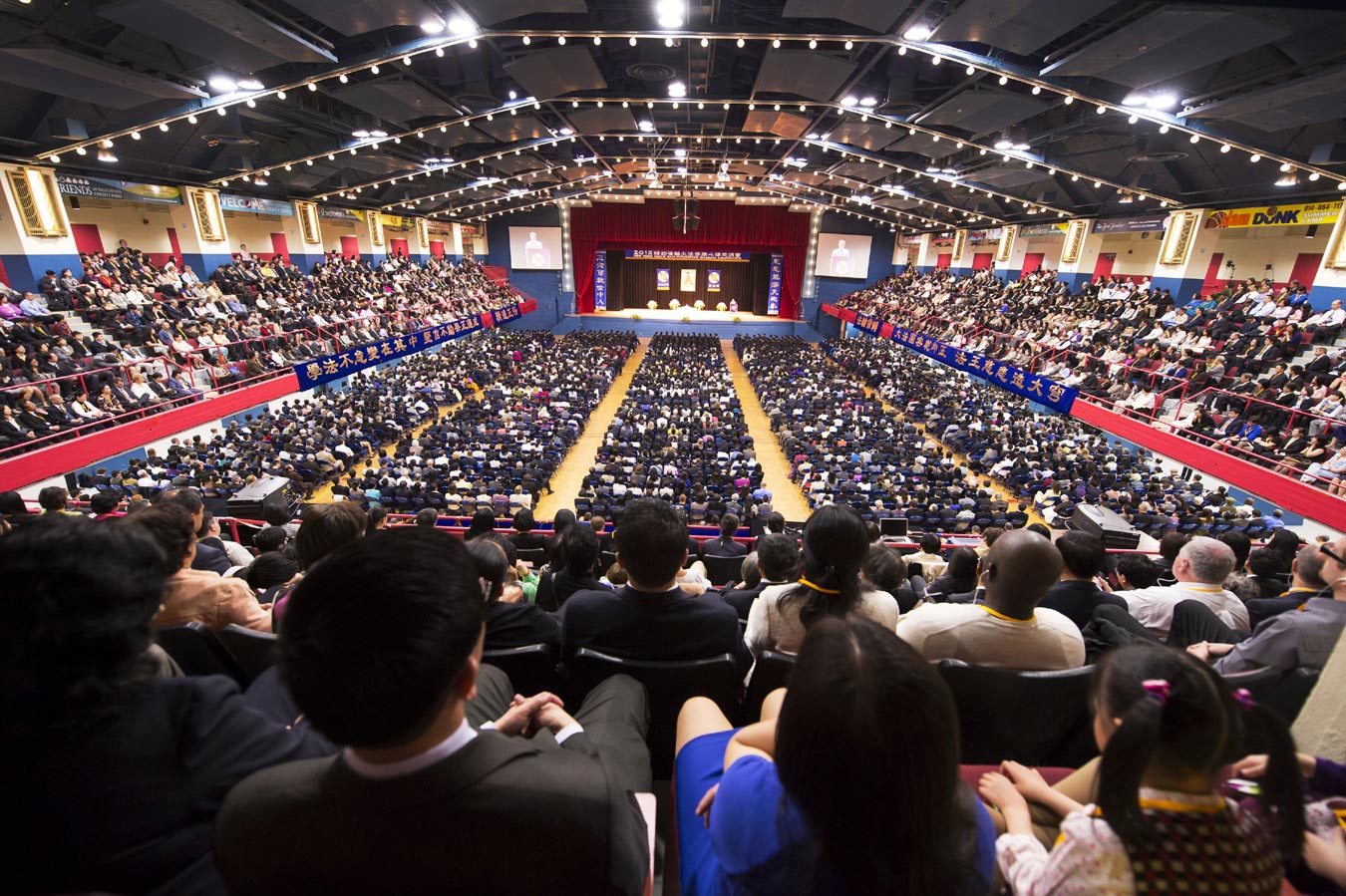 Main venue of the Fa conference

As there were a large number of practitioners attending, the Fa conference was divided into a main venue and several secondary venues. The main stage in the main venue was arranged with fresh flowers. The huge image of revered Master was right in the middle, Falun emblems with words “Falun Turns Constantly,” and “Truthfulness-Compassion-Forbearance” were on each side of Master's image. Two vertical banners bearing two verses from Master's poem “The Fa Rectifies the Cosmos” were hung on each side of the Falun emblem:

“Compassion can harmonize Heaven and Earth, ushering in spring
Righteous thoughts can save the people in this world”
(from Hong Yin II)

Opposite the main stage, on the left was a vertical banner bearing two verses from another of Master's poems, “Advance Wholeheartedly, Enlighten Righteously:”

“Study Fa without idling, changing in the process
Firmly believe without budging, coming to fruition—lotus forms”
(from Hong Yin II)

On the right was a vertical banner with two verses from Master's poem “Falun Turns Constantly,”

“Dafa embraces and harmonizes, and heaven and earth is rectified
The Lord of Fa is merciful, and creates the vast firmament”
(from Hong Yin II)

At the back were “Truthfulness-Compassion-Forbearance.” 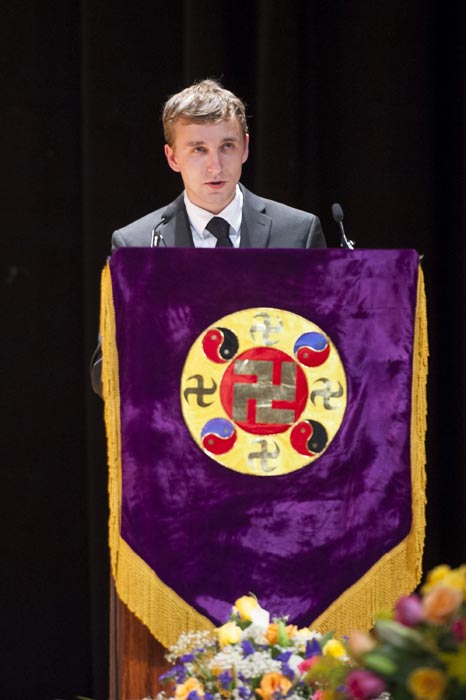 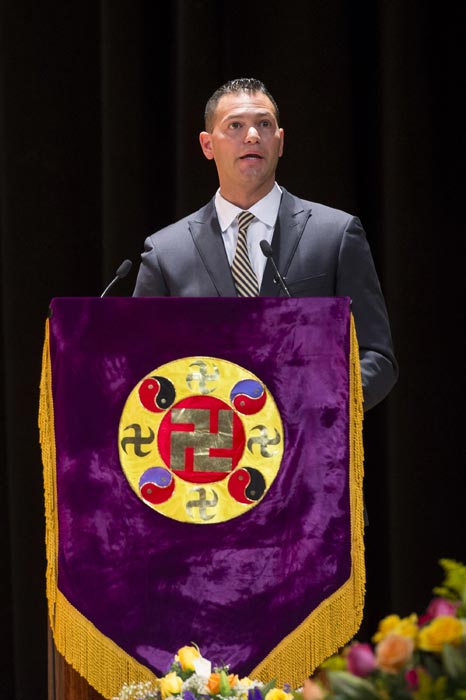 Among practitioners who attended the Fa conference this year, there were many more Western practitioners compared to past years. Since the Chinese Communist Party (CCP) started the persecution of Falun Gong in 1999, there has been an international Fa conference held in New York almost every year, and practitioners from around the world have been invited to attend. In the beginning, the vast majority were Chinese, but as time went on, there have been more and more Western practitioners. From their conversations, it was apparent that they have grown mature in cultivation, compared with those who attended out of curiosity in the early years. Chinese and Western practitioners have become an integrated entity. Falun Dafa, since it was first introduced in 1992 in China, has taken root in the West.

In addition, since the persecution started, due to the evil CCP's slander, propaganda and brutal persecution, Falun Gong practitioners, other than studying the Fa, doing the exercises, and cultivating their xinxing based on Truthfulness-Compassion-Forbearance, have adopted various approaches to clarifying the facts about Falun Gong to the worlds' people, such as advising the Chinese people to quit the CCP organizations and promoting the Shen Yun performance. 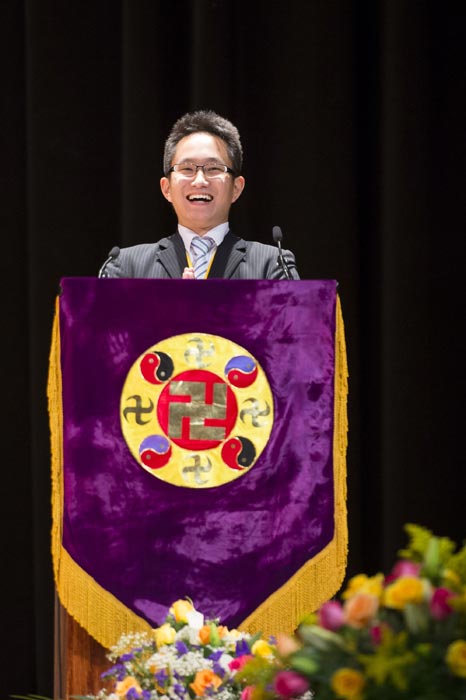 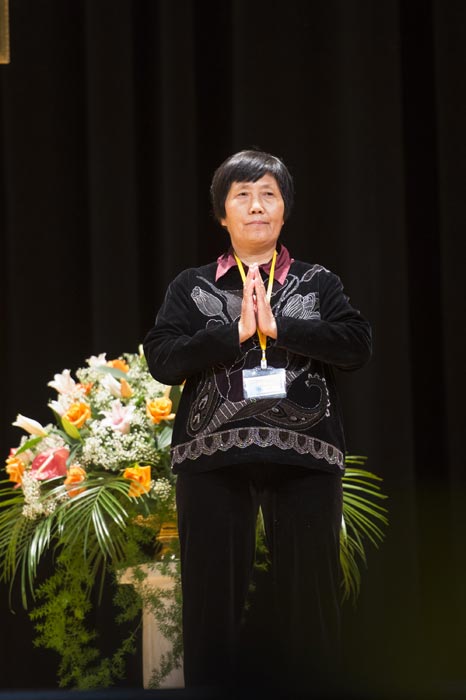 Sixteen Chinese and Western practitioners shared their experiences at the Fa conference. They talked about how they cultivate in Dafa, clarify the facts about Falun Gong and save people, and assist Master in Fa-rectification. The speakers included new practitioners who just entered the cultivation not long ago and veteran practitioners who have cultivated for more than ten years. There was also an eleven-year-old child, a 77-year-old grandfather, a practitioner who just graduated with his Master's Degree, and a mother of two children. They come from different professions, belong to different age groups, and have different social backgrounds. Everyone is bathed in the Buddha's enormous grace, and are fulfilling their vow made long ago.

The Shen Yun tour this year has received unprecedented welcome wherever it has gone, with sold-out shows being seen in many cities. Several practitioners shared their precious experiences of holding Shen Yun performances in their respective cities.

Phoenix is the capital and the largest city in Arizona, but there are not many practitioners there. When holding Shen Yun performances, the practitioners there received tremendous support from practitioners in other states. Several local practitioners who had not been active were encouraged to step forward to promote Shen Yun, and some of them achieved good results in ticket sales. With everyone's full cooperation, and adopting a variety of approaches to promote Shen Yun, coupled with practitioners' working more than ten hours a day, eventually they were able to present three sold-out shows in Phoenix. What impressed Xiao Jing deeply is, “We should not see practitioners as having this or that shortcoming on the surface, as long as the practitioner has a genuine heart to save people, everyone can play a good role in promoting the Shen Yun performance.”

Seventy-seven year old practitioner Mr. Yang Qing from Chicago delivered the special issue publication about Shen Yun to households every day from December last year to March this year. It is very cold in Chicago's winter, but Mr. Yang overcame all kinds of physical discomfort, and kept going out to deliver the good messages of Shen Yun every day.

Practitioner Robert Gray from the U.K. shared how he changed his notions, proactively stepped forward to come into contact with groups of mainstream society, and introduced Shen Yun to them. Robert realized that the key to success is thoroughly explaining the truth, and offering an opportunity for the sentient beings to make a choice.

Ms. Chen Yao from Atlanta began practicing Falun Gong in mid April, 2011. She talked about how she cultivated herself solidly and diligently in the process of promoting Shen Yun performance. Her husband's family exerted great pressure on her at the beginning because they don't believe in gods and Buddhas and are afraid of the CCP. After studying the Fa a lot, and reading practitioners' cultivation experiences, Ms. Chen strengthened her belief, arranged her life well, and overcame sickness karma elimination test and her conflict with coordinators. She brought her two young children with her while actively promoting Shen Yun. Later, as Ms. Chen improved a lot in her xinxing, her family of eight all attended the Shen Yun performance, and her husband also began supporting her.

Western practitioner Damon Noto from New York shared with everyone the magnificent scenes he saw during the Shen Yun performances in New York: the dancers and orchestra emitted powerful energy. There were countless Buddhas, Bodhisattvas, Taos, Deities and Master's Law Bodies in the theater. He encouraged the practitioners to cherish the opportunity, help each other and wholeheartedly assist Master in saving more sentient beings.

A practitioner from Macau talked about how she remained steadfast in her belief, “Wherever there's a problem, that is where we should go clarify the facts...” (“Teaching the Fa at the 2003 Midwest-U.S. Fa Conference”). She has continuously clarified the facts about Falun Gong to the police, high-ranking officials in the legal system, and eventually broke through the evil's interference. A truth clarification site was established in 2001 in Macau, and since then, it has opened every day. She advised Chinese tourists to quit the CCP and its affiliated organizations, from one or two at the beginning, to 180 people announcing their withdrawals from the CCP organizations within half a day. She also personally witnessed the huge changes in the Chinese tourists.

Practitioner Ms. Zeng Qiong from Long Island in New York shared how she rectified herself while holding the “Truthfulness-Compassion-Forbearance” International Art Exhibition. She seized a chance to clarify the facts about Falun Gong to the organizers, ensuring the successful completion of the art exhibition, and saving more sentient beings.

Mr. Peng Yongkang from Connecticut was originally from Hebei Province, China. He began practicing Falun Gong in 2008. He shared how he took advantage of his profession as a lawyer to defend illegally detained practitioners and clarify the facts to save the world's people.

Mr. Wang Yifei from Vancouver shared his experience and understanding of studying the Fa, cultivating xinxing, and sending righteous thoughts. When he was engrossed in studying Fa, he could feel every character in Zhuan Falun, and even punctuation marks as being three-dimensional and alive. He could see endless and boundless universes in the Fa. He also saw the state of attachment in other dimensions such as pursuit for comfort as a pile of bugs, attachment to fear as a group of mice, lust is feces, etc. He looks within, cultivates his xinxing at all times, and makes more effort to send righteous thoughts and eliminate his attachments. He truly experienced that everything is a real manifestation of Master using his enormous Fa power to do Fa-rectification and save sentient beings. Being able to walk through the Fa-rectification period with great Master's care and protection, is a life's eternal happiness and glory.

The Fa conference concluded at 6:30 p.m. The experience sharing encouraged all practitioners attending the conference to compare with each other in cultivation, advance diligently and enthusiastically as they did while just beginning the practice, cherish this unprecedented valuable historic opportunity, make their greatest effort and use their hearts to do well the three things, save more sentient beings, assimilate to the Fa, reach Consummation and follow Master to return home.