(Minghui.org) A “Falun Gong Works to End the Persecution” Photo Exhibition was held on March 23, 2012, at the Information Area Exhibition Center in Split, the second largest city in Croatia. The 20-day exhibit will run until April 12. 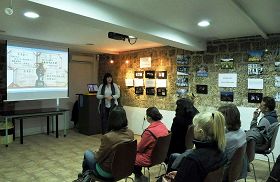 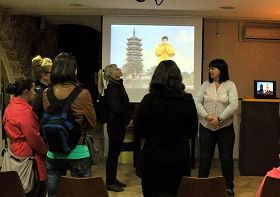 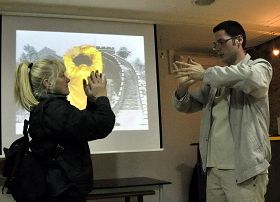 Visitors learn to practice Falun Gong at the exhibit

Since the opening of the exhibition, many locals in Split have come to visit, as well as tourists from different countries. This city, which is rich in history and is home to the most beautiful harbor in the world, draws many tourists.

Several local media outlets reported on the event. The radio station on the famous Island of Brac and the local newspaper, Free Dalmatia, covered the photo exhibition and introduced Falun Gong positively. They also expressed strong condemnation for the ongoing persecution in China.

On the same day as the opening ceremony, practitioners also held a Falun Gong Information Day Activity on the Riva Seaside Promenade in downtown Split. Accompanied by peaceful exercise music, practitioners demonstrated the five exercises to locals and tourists. They also passed out truth-clarifying flyers and flyers about the photo exhibition that was to begin that day. People were shocked at the CCP's brutality, and many said they would come to view the exhibition. 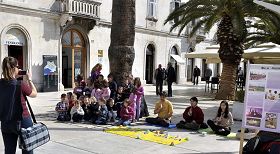 Nearby island radio station Radio BRAC had a ten-minute interview with Falun Gong practitioners at the opening ceremony. When the practitioner talked about the brutal persecution taking place in China exposed in the exhibition, the reporter exclaimed, “It's like the scenes mentioned in the Bible!” He said that the significance of holding the exhibition is to “awaken people.” He believed that the righteous will definitely triumph over the evil. “Such an adverse situation won't last too long! ” he said, and sincerely wished the exhibition great success.