(Minghui.org) Shen Yun Performing Arts International Company made a five-show stopover at The London Coliseum in the United Kingdom, from April 12-15, 2012, bringing 5,000 years of China’s cultural heritage to stage. 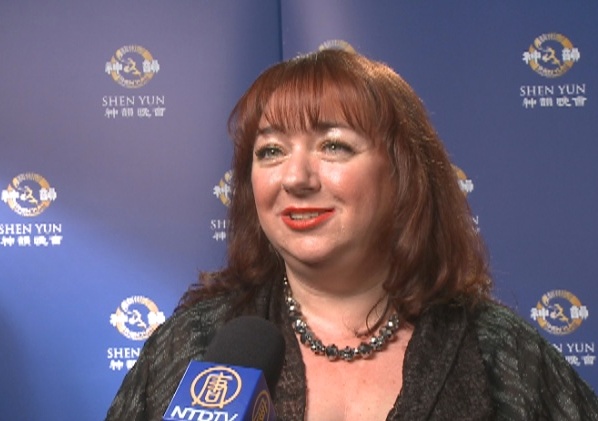 Among the many well-known guests at the show, was Member of Parliament for Washington and Sunderland West, Sharon Hodgson. “Oh it was fantastic, it was so moving,” she said of the performance.

The MP was particularly moved by the dance drama, “The Choice,” which depicted a young couple being separated by fate, but in the end, fate also brought them back together.

“I found it really quite emotional … the choice the young man had to make. I found that very moving.”

Ms. Hodgson was also fascinated by the history of Chinese traditional dance.

“What I found really interesting is when we were told that all modern dance [including gymnastics] was based on Chinese traditional dances—I could understand what they meant. I found that very fascinating. They were amazing, so talented, very, very talented.”

Being a huge fan of ballet and tap dance and all sorts of modern dancing, Ms. Hodgson could see how they all originated from classical Chinese dance.

“You could see all the origins there, and the technique was amazing,” she said.

“I thoroughly enjoyed it, and the costumes were just a visual spectacular, it was just brilliant.”

“I thought that was very clever, how you would see them [artists] coming down through the backdrop and then they would just appear, the timing was impeccable! And it was a real surprise the first time it happened, yes it’s great.”

MP: “So many dancers, so many colors, so bright, so wonderful” 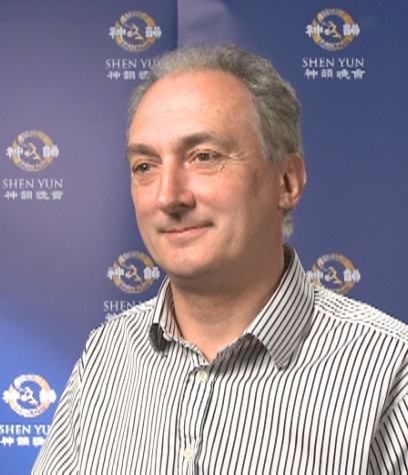 Mike Weatherley, another Member of Parliament was also in the audience. “The show was great,” he said.

“What really impressed me were the costumes and the bright colors on the stage. It was really vibrant and it was really exciting to see all that going on, and all the activity—so many dancers, so many colors, so bright, so wonderful.”

The MP said he thoroughly enjoyed the entire show and “got a feeling of joy all the way through” it.

The dance that especially caught his attention was The Choice, which depicts the oppressive environment of modern China, particularly as it applies to the spiritual discipline of Falun Gong.

“The message was that it was a history, 5,000 years of history, which isn’t really allowed to be developed as much in current-day China, as I understand—from what I found out tonight—and that’s a shame,” said Mr. Weatherley.

“There are parts of the history that are perhaps denied to some of the population—the freedom, the choice—that was raised very specifically, and poignantly raised, about the free-thinking person.”

Mr. Weatherley felt that everyone could benefit from watching the show.

“I’m very new to Chinese culture and I enjoyed it, so I’ll be telling people about it,” he explained.

He concluded with, “[Shen Yun is] something that just nudges you towards learning more about the Chinese culture and learning about the history of China … It’s very good to be able to see it.”

Mayor: Shen Yun is “a must-see” 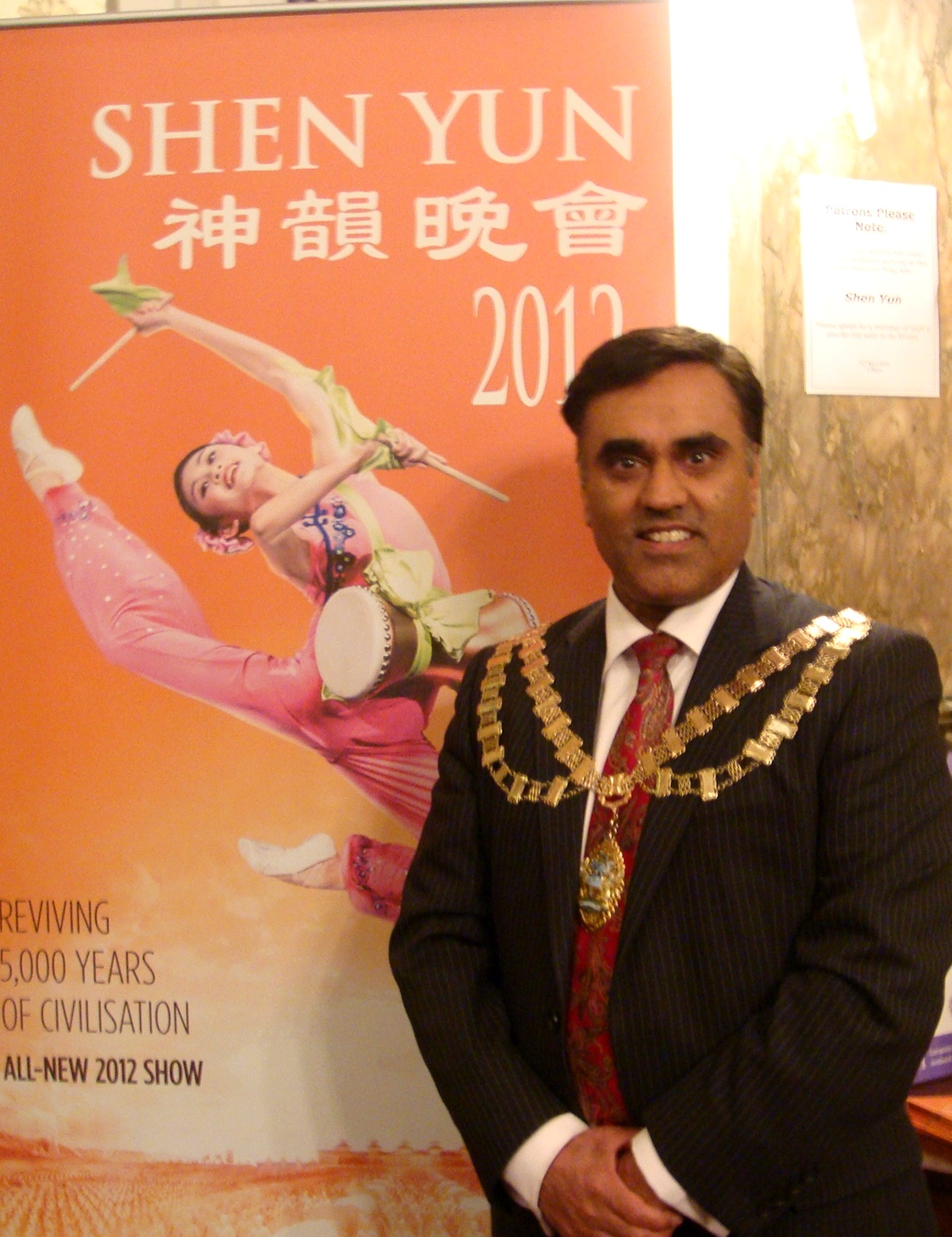 Councilor Amritpal Singh Mann, mayor of the London Borough of Hounslow, was touched by quality of the Shen Yun show, saying, “It’s a must-see. Everybody must come and see this, it’s fantastic!”

After seeing the performance, Mr. Mann felt more informed about Chinese culture. “I think the Chinese culture is very important and is very colorful.”

He noted that the “expression of freedom” that the different dances portrayed “is very important, and that touched my heart profoundly.”

Referring to the performances in the show that tell stories of individual courage during the persecution of Falun Gong in present-day China, Mr. Mann said, “Everybody has got to have a certain degree of freedom in order to express themselves, and I think that’s also very important because culture comes about as a part of expression.

“When you are culturally allowed to express your opinions, it adds to the flavor of the overall culture, and it’s very, very important. If you suppress [this expression], then sometimes you don’t get the culture growing further and doing a lot more good things and a lot more colorful things. It makes us richer to have different opinions.”

He concluded by saying that Chinese culture “is very important and is very colorful … it’s very rich, rich in color, rich in tradition. I thought [Shen Yun] was fantastic; I’ll come again, any time.”

Also in the audience was Kash Akram, managing director of the international Asian Lifestyle magazine.

“I loved it and my family who joined me loved it, too,” he said. “So I think it’s something that will remain in my mind, and of course, I look forward to next year.”

He continued. “The same show is never performed the same again. It’s always a new show, so I think that’s what the public wants.”

When asked if he'd suggest the show to others, he replied, “I would absolutely recommend this show to everyone. I think it’s a great show and I’m a great supporter of Shen Yun.”

Shen Yun’s program book explains the opening dance as a battle between celestial soldiers and a demon horde in the heavens, with good winning over evil. Yet, the contest between good and evil continues in the human world.

“I think that’s a reflection of day-to-day life because you have the good and bad in life and I think every day we live our lives, we see good things and we see bad things, and what it’s doing is cementing that information into our minds,” the director said. “And the show shows that there is a way of tackling the bad that exists and in a very humane way.”

He also touched upon China's 5,000 years of traditional culture, saying, “It’s such a great history and it should be celebrated and embraced.”

Mr. Akram felt that by seeing Shen Yun, audiences can understand how history impresses itself on future generations, passing along its message.

He concluded. “So what happens is it’s kind of a chain reaction and it spreads globally.” 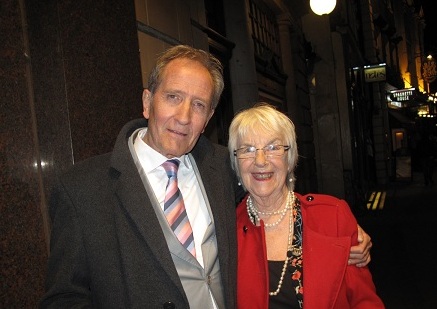 Producer Valentine Palmer proclaimed, “Every one of those dancers could be a premier solo dancer here at the Coliseum or at the Royal Ballet.”

Also attending the Shen Yun performance was Valentine Palmer, producer, voice coach, actor, and former singer, who has previously performed at the venue.

“It’s extraordinary,” he said. “I’ve never seen anything like it. And I have to say honestly, some of the pieces were so exciting that I was emotionally moved. I felt I wanted to cry. And I don’t cry easily.”

At the heart of every Shen Yun performance is classical Chinese dance—one of the most comprehensive in the world, according to the performing arts company.

“Every one of those dancers could be a premier solo dancer here at the Coliseum or at the Royal Ballet,” proclaimed Mr. Palmer.

“It was quite extraordinary, and some of those leaps and moves are amazing—it’s like they are made of elastic, you know, it stretches and if I tried any of those I would be in hospital for a year. So that’s very impressive.”

With a background in singing, Mr. Palmer shared his experience of listening to the vocal soloists of Shen Yun, who use bel canto technique while singing Chinese lyrics.

“When we get trained as singers, serious singers, we train in the Italian way, usually singing Italian. Now, when you sing in Mandarin or Cantonese—whichever—using this kind of Italian style, it’s very, very difficult, because the Chinese voice is placed, say up here? This is where it is. So you’ve got the voice placed here but you are singing in a modern style,” he explained, motioning, “I was particularly impressed by the tenor—wonderful, wonderful tenor voice, and I think there was a top C in there somewhere. Very impressive.”

Mr. Palmer also talked about the spiritual beauty of the show.

“I think that [Shen Yun] has a spiritual quality that we perhaps don’t associate with China today; we think of transistors and iPads and things being made in factories. You can be moved to tears by the beauty of this show and the feeling of it.”

He elaborated. “There is no show like this—of course there is nothing like it,” adding “…this show is introducing [ancient Chinese] tradition to us here in England. And people in England don’t know anything about this kind of thing and it’s a wonderful introduction.”

“I just felt that the energy was so beautiful and I loved the enthusiasm and the passion of the dancers. The colors were just extraordinary, an extraordinary experience, and I’m so grateful for having the opportunity to come and see [Shen Yun]. I will certainly tell people about it and come again.”