Ireland: Falun Dafa Association Calls for a Stop to the Persecution Ahead of Prime Minister's Visit to China (Photos) 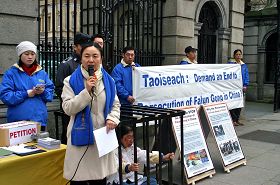 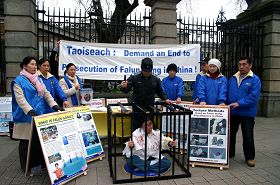 Exposing the persecution by means of torture re-enactments 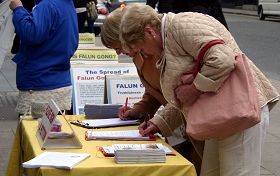 Many people signed the petition to support Falun Gong 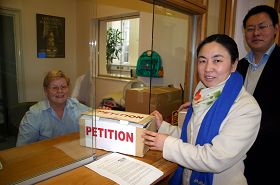 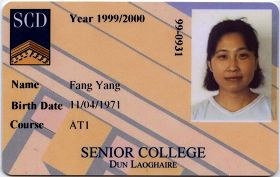 Ms. Fang Yang, a Falun Gong practitioner who was studying in Ireland, is still being persecuted in China (photo from her student I.D.)

The spokesman for the Irish Falun Dafa Association said that she hoped that Mr. Enda Kenny, Irish Prime Minister, would take the CCP’s persecution of Falun Gong and human rights issues as highest priority during his visit to China at the end of this month. She added that Ireland has always upheld justice on the issue of human rights, and she expressed hope that the country will continue to adhere to this position. The Irish Falun Dafa Association put forward four points to Prime Minister Kenny.

First, demand that the CCP immediately stop the persecution of Falun Gong. For more than 12 years, the CCP has inhumanly been persecuting Falun Gong practitioners by mobilizing the entire state apparatus, resulting in hundreds of millions of families being broken apart. Good and honest people who believe in Truthfulness-Compassion-Forbearance have been persecuted, locked up in labor camps, prisons, and psychiatric hospitals, and are being tortured. It has been confirmed that more than 3,500 Falun Gong practitioners have been persecuted to death. This brutal and bloody persecution must stop immediately.

Secondly, bring the main culprits and perpetrators to justice. During the persecution of Falun Dafa practitioners, led by Jiang Zemin, the perpetrators have tried to force people to abandon their beliefs in Truthfulness-Compassion-Forbearance using every torture method, from past to present. However, they have failed to shake practitioners' beliefs. Many Falun Gong practitioners in China have not only maintained their belief in Truthfulness-Compassion-Forbearance, but have also been explaining the facts to the Chinese people, many of whom have been confused by the CCP’s lies about Falun Gong. The main culprits and perpetrators, including Jiang Zemin, Luo Gan, Zhou Yongkang, Liu Jing, and Bo Xilai, have been sued in many countries for their crimes against humanity, genocide, and torture.

Thirdly, call for an international investigation into the bloody atrocities including the CCP’s harvesting organs from Falun Gong practitioners. This should start immediately. According to the investigative report by David Kilgour and David Matas, during the more than 12 years of the CCP persecution of Falun Gong, techniques in organ transplantation and the number of surgeries have risen at top speed. Witnesses have revealed that in the early stages of the persecution of Falun Gong, the CCP constructed new prisons and labor camps for detaining Falun Gong practitioners. Those practitioners who refused to reveal their names were subjected to forced organ harvesting while still alive, and their bodies were cremated to eliminate the evidence. Mr. Matas described it as "evilness" that has never before been seen on the planet. This evilness must not be allowed to continue, must be immediately stopped, and must be investigated by an international investigation group.

And fourthly, call on the CCP to return the passport of Ms. Yang Fang, who was studying in Ireland. Yang Fang, a Falun Gong practitioner who returned to China to appeal for Falun Gong in late 1999, was detained and her passport confiscated. In 2002, she got her passport and her Irish visa back. However, as she boarded a plane at the Beijing Airport, she was again taken away and detained by the CCP authorities. She was subsequently sent to her hometown in Shenyang and her passport was confiscated again. In a few years’ time Yang Fang’s elderly father passed away with illness due to his daughter’s plight. Ms. Yang Fang's mother has been also living in fear, worried about her daughter's safety.