(Clearwisdom.net) Bringing a sense of hope and wonder to the city known as “the home of country music,” Shen Yun Performing Arts uplifted the audience’s spirit at the Tennessee Performing Arts Center in Nashville on February 26, 2012. The internationally acclaimed classical Chinese dance and music company presented two shows at the venue as part of its 2012 world tour.

Based in New York, Shen Yun travels around the globe with a brand-new production each year with the mission to revive 5,000 years of rich traditional heritage that has been largely destroyed by the Chinese communist regime in the past 60 years.

Retired educator: “It is an absolutely beautiful, wonderful, fantastic show”

Vivian Sims, a retired educator who served as a principal of an elementary school, decided to experience Shen Yun after seeing an advertisement in the local newspaper. “As soon as I got the newspaper, I called up and made reservations,” said Ms. Sims.

She was happy with her choice. “It is an absolutely beautiful, wonderful, fantastic show—I loved it!” she exclaimed after the performance.

Having traveled to China in recent years, she added, “This supersedes anything that I saw when I was in Beijing.”

“This is fantastic and wonderful entertainment,” she declared, noting her appreciation for the “singing and dancing and outstanding music.” 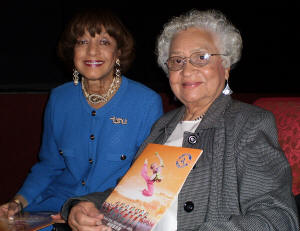 “The dancers are truly athletic, superbly trained and right on point,” added the university president.

She was also impressed by the educational value of the performance: “The storylines are really interesting. We followed them along and now we know better what the culture is trying to tell us.”

Shen Yun presents ancient legends and stories of contemporary China through the medium of classical Chinese dance, one of the most comprehensive and expressive dance systems in the world. All-original orchestral compositions accompany each dance, and the digitally projected backdrops expand the experience, transporting the audience into the places far away in space and time.

Ms. Shields was surprised to find different layers of meaning and showmanship in each story-based dance. She offered an example of a dance called “How the Monkey King Came to Be,” which depicted a legend from the classic Chinese novel “Journey to the West.”

“The whole performance had a bunch of stories in it,” noted Ms. Shields, appreciating how it portrayed “someone who changes his mind and changes his life.”

“‘The Choice’ was another one that I thought was quite moving,” continued Ms. Shields. “I thought it was just going to be about a boy and girl conflict, but it really was much more than that—it was a conflict between good and evil.” The dance presented a story of two friends having to make a difficult choice in the face of the ongoing persecution of Falun Gong in today’s China.

Pastor and his wife: “We are enjoying it!”

Also in the audience at the Tennessee Performing Arts Center on Sunday was Harold Hockett, a pastor at the Born Again Church, who came to the performance with his wife, Marion Hockett. 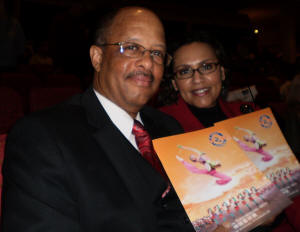 “I think it’s really interesting. I’ve never seen it before. We are enjoying it!” said the pastor at the intermission. “All the colors…and the way they tell the stories is very interesting.”

In agreement, Mrs. Hockett gladly shared her own point of view. “I am enjoying the culture—seeing a different side of it. I love the dance and the story-telling,” she said.

She was especially touched by the “The Choice,” a dance that reflects on the current oppression of Falun Gong practitioners in China. The Chinese communist regime began to persecute the followers of the spiritual practice in 1999, continuing the suppression to the present day.

“I loved ‘The Choice,’” said Mrs. Hockett. “It was very good, very good.” Noting the struggle between “good and evil” depicted in the dance, she explained: “I really loved how…the good won out in the battle.”