(Clearwisdom.net) The Shen Yun Performing Arts New York Company, whose mission is to revive China’s 5,000-year-long divinely inspired culture, staged six shows at the Tainan Municipal Cultural Center in Taiwan on March 7-11, 2012. Tainan City, which is the island's oldest and fourth largest city, is famous for its rich cultural heritage and historic sites. 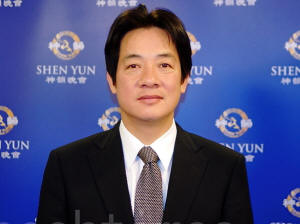 Mr. Lai marveled at the fact that every year that he has seen Shen Yun, the programs were not only different, but they are always fresh and leave the audience in awe.

Mr. Lai commented on the ethnic dances and cultures presented by Shen Yun, particularly the Qing dance (The Qing Imperial Guards)—which he described as delicate and graceful—and the Taiwanese Amei dance (In the Mountains).

“The Taiwanese Amei dance and the Qing dance were wonderful and gorgeous!” he exclaimed.

As the former head of the Asian sub-coalition, Coalition to Investigate the Persecution of Falun Gong in China, Mr. Lai especially resonated with the number that depicted the heartfelt story of Falun Gong practitioners being persecuted for their faith, yet they still remained steadfast. He expressed his admiration for the practitioners.

“I have always supported Falun Gong. I think it’s very good to use dance to promote Falun Gong’s principles of truthfulness, compassion, and tolerance,” he explained. 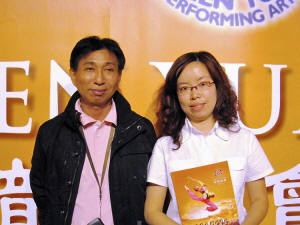 Also in the audience was Mr. Wei Kai-Jen, director of the Feng-Huang Orchestra, and his companion, Ms. Chen Wan-Lin.

Mr. Wei talked about how impressed he was with Shen Yun. “The perfect combination of the dance, music and dynamic backdrop makes the show a first class international performance.”

He felt that the Shen Yun Orchestra was the heart and soul of the show. “The audience sees the performance on the stage, but the real soul of this performance is the live music from under the stage. That is the grand master of the show.”

Mr. Wei described the music arrangements as “marvelous!” adding, “Arranging music is not limited to the production of the music alone but the music must extend to coordinate with the dance and also the design of the dynamic backdrops.”

He also praised Shen Yun for its creativeness and choreography. “It integrated each original art form naturally with music,” he said.

Mr. Wei said that Shen Yun’s performance was “perfectly arranged in music, dance, and backdrop. These are the three elements that make it first class art!”

Ms. Chen, who is a Chinese music major and currently the chair erhu fiddler, said that the music by Shen Yun’s erhu soloist, Qi Xiaochun, “is soft and enchanting, with a lot of emotion.” She thought that the Shen Yun Orchestra perfectly blended Eastern and Western musical instruments.

She also talked about the exquisite and delicate costumes, noting that the colors and fabrics of the costumes “flow in the air brilliantly.”

“The designers are very particular about matching colors and the clothing materials. The feast of art is definitely worth the trip,” she concluded. 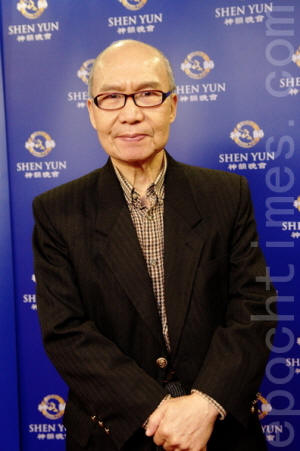 Mr. Kuo, who had directed 28 films, was very popular in Hong Kong and Taiwan in the 1970s. He said that he had seen Shen Yun for several years in a row and every time he saw it, he “was moved.” He added, “It is beyond words.”

Joseph Kuo praised the skills of the performers noting the time, energy, and effort that must have gone into their training.

“(The dancers) changed movements almost every three to five seconds in every program. Without rigorous training repeatedly, it is impossible to make it,” he noted.

Having been in the film circles of Hong Kong and Taiwan for so many years, Mr. Kou said that Shen Yun is always at the first-class level in the areas of arts, choreography, costumes, and fine arts design.

He explained, “In particular, the backdrop this year is simply a myth. I have been thinking, ‘What kind of art design or computer technology could make such an effect possible?’ Over the past few decades, only Shen Yun could have such magnificent performance.”

Mr. Kou highly recommended Shen Yun, saying, “This is something difficult to come by once in a lifetime. It is indeed very wonderful. Never hesitate, and never waste time waiting to see it.

“Whenever I saw the performance, I was touched. I was indeed touched deeply.” He also said that when Shen Yun performs in Kaohsiung next week, he would like to see it again. “I have seen it two or three times every year.”

General manager: Shen Yun a ‘union of culture and arts’ 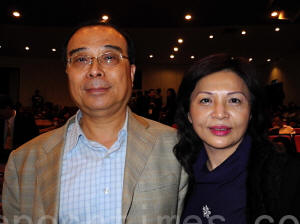 Mr. Wang said he felt a deep connection with Falun Gong practitioners after seeing a scene where divine beings descended from heaven to rescue persecuted practitioners.

He felt that the show provided people with an opportunity to know the truth about the persecution against these kindhearted people.

“I have come across many Falun Gong practitioners in different parts of the world. I sensed a spirit of perseverance,” said Mr. Wang.

He described the Shen Yun performance as a “union of culture and arts.” 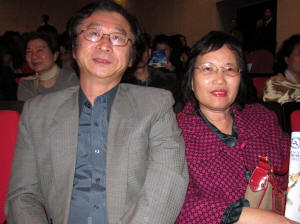 He described the show as “really spectacular,” noting that China’s 5,000-year-year-old culture “was vividly displayed in the performance, which has profound inspiration.”

Mr. Xiuping Lin praised the Shen Yun performers, saying that they must have gone through rigorous training to reach such a high level of performance.

He also felt that Shen Yun would be able to enhance the cultural standard in Taiwan. “It’s really great!” he said.

“The entire performance was really superb and very wonderful,” he added.

Lin Xiuping said that the animated backdrops made him feel like he was a part of what was happening on stage.

“In fact, I’m very busy every day. Watching the performance made me feel very relaxed, as it is very inspiring and touching. It gave me a sense of participation, and I felt like I was a part of the performance.”