(Clearwisdom.net) On February 4, the Divine Land Marching Band in Taiwan and a waist drum team, both consisting local Falun Gong practitioners, were invited to performed at the 2012 Fire-Dragon Festival in Miaoli, Taiwan. The band's performances were very popular last year, so this year, the organizer scheduled their performance as the last program of the festival.

The waist drum team performs in the 2012 Fire-Dragon Festival in Miaoli, Taiwan

Fifty-two groups participated in the parade. The last three entries were all Falun Gong practitioners: the waist drum team, the Divine Land Marching Band, consisting of 200 practitioners, and a group of practitioners dressed as celestial maidens, handing out handmade paper lotus flowers. The spectators warmly welcomed the Falun Gong entries. In order to take photos of the band, many of people crossed the police barricade and went to the middle of street. 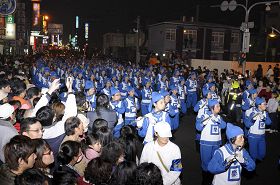 Hundreds of thousand people watched the parade. There were several reviewing stages along the parade route. Every time the Falun Gong entry passed a stage, the host shouted through the microphone: “Falun Dafa is good; Welcome the Divine Land Marching Band.”

Several spectators bought bottled water for the band members after their long performance. Many Chinese tourists also watched the parade and asked the practitioners questions afterwards.