(Clearwisdom.net) A Life Expo was held January 22 and 23, 2012, in Graz, Austria. Falun Dafa practitioners participated in the event. They introduced the cultivation practice of Falun Dafa, also known as Falun Gong, to visitors and demonstrated the five sets of exercises in the broad space beside their booth. Their shimmering golden exercise outfits and graceful exercise movements drew visitors to watch for a long time. 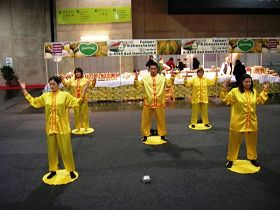 Near the end of the first day at the expo, a gentleman came to the Falun Gong booth and watched the exercise demonstration. Upon learning that the practitioners in their traditional golden exercise outfits had been doing the exercises all day long, he was very sorry that he hadn't come earlier to see it. The practitioners told him that they would be showing how to do the exercises the next day. He said, “I'll come again tomorrow, then!” He sincerely said goodbye to practitioners.

Many visitors learned where and how to learn Falun Gong. Some bought the German edition of Falun Gong, written by the founder of Falun Dafa, Mr. Li Hongzhi.

Many visitors got to know about Falun Dafa for the first time. Through this opportunity, they witnessed the wonder and peacefulness of Falun Dafa and were also made aware of the brutal persecution of Falun Dafa practitioners by the Chinese Communist Party in China.