February 10, 2012 |   By a Clearwisdom correspondent from Inner Mongolia, China

(Clearwisdom.net) In April 2011, Falun Dafa practitioner Ms. Ren Suying was arrested by local police led by Liu Caijun and was brutally beaten. In November 2011, she was summoned for a hearing by the Court of Wengniuteqi in Chifeng City. She was represented by a lawyer who pleaded not guilty on her behalf. Her husband, Mr. Ren Liyou, sued Liu Caijun for the crimes he committed against his wife. The Court of Wengniuteqi evaded the lawsuit.

Ms. Ren was arrested on Xinhua Street in Wengniuteqi, Wudan, by three police officers from Wengniuteqi City on April 19, 2011. After she was brutally beaten, shocked with electric batons, handcuffed to a bench for seven days, and had her fingernails stabbed with bamboo sticks by officers led by Liu Caijun, chief of the National Security Public Security Bureau in Wengniuteqi City, she lost consciousness. Furthermore, Liu hit her head with his fists, kicked and beat her with a water bottle, resulting in black bruises all over her body. Because of long periods of beatings and shackling, her right shoulder became infected and her left foot was seriously injured. 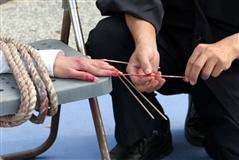 On November 1, 2011, at about 10 a.m, Ms. Ren was summoned by the Court of Wengniuteqi for a hearing. Her lawyer, who was from Beijing, pleaded not guilty for her.

In collaboration with the 610 Office in Wengniuteqi City, the Court of Wengniuteqi, the Procurator, and the Public Security Bureau attempted to hamper the defense. Nonetheless, the lawyer pleaded not guilty for Ms. Ren. In the middle of the trial, the judge suddenly called a halt and adjourned the proceedings.

Ms. Ren's family sued the police for their criminal acts

During the hearing, Ms. Ren's husband became deeply agonized when he learned of the torture that Liu and other officers had inflicted on his wife. He knew that his wife was innocent. He went to the procurator in Wengniuteqi and filed a lawsuit against Liu for extorting a confession from his wife with torture and brutal beatings. The procurator refused to process the lawsuit.

The Communist authorities tried to evade Ms. Ren's family when they inquired about the lawsuit

On December 23, 2011, Ms. Ren's husband telephoned the Court of Wengniuteqi to inquire about the progress of his wife's case. During the previous hearing, after listening to the lawyer who pleaded not guilty for his wife, he knew that she hadn't broken any laws. She should have been acquitted by the court that very day, but it had been more than a month since that hearing, and her case was not progressing. Mr. Ren was hoping the court would release his wife so that they could be together. A court clerk told him that her case had been transferred to the Committee of Political and Legislative Affairs. When Mr. Ren phoned the Committee, no one picked up the phone. Mr. Ren discussed the matter with his relatives and they decided to go to the court to find out what had really transpired.

On December 26, several of Ms. Ren's relatives went to the court in Wudan Town in Wengniuteqi and spoke with Yang Jingcheng, judge-in-chief of the court. Yang lied to them, saying that he had no authority over her case. He said there had been five Falun Gong-related cases and he couldn't make a determination on any of them. He said Ms. Ren's case had been transferred to the People's Intermediate Court in Chifeng City.

Ms. Ren's relatives went to the Committee of Political and Legislative Affairs, where they were received by an office clerk. They asked the clerk whether they had received a lawsuit against Liu Caijun for beating and torturing Falun Gong practitioner Ren Suying. The clerk said he had never heard of such a case. Despite the twists and turns that Ms. Ren's relatives had undergone, the Communist authorities just “passed the buck.”

Ms. Ren's relatives went to visit her in the detention center, but the police guards there refused to allow them to see her.

On December 27, Ms. Ren's relatives again went to the People's Intermediate Court in Chifeng City. They spoke with the pertinent individuals and asked them about her case. They all said they had never heard of it. Later on, one of them called Yang Jingcheng, the chief judge, to ask whether Ms. Ren's case would be heard in Courtroom One or Courtroom Two. Yang said he had not sent the case out yet. Yang had obviously been lying all along. Not only did he not release Ms. Ren, but he also tried to cover up Liu's criminal acts.

When Ms. Ren's relative asked Yang Jingcheng why he lied to them, he hung up.

Court of Wengniuteqi personnel involved in the trial:

For more information on others involved in the trial, please refer to the original text in Chinese.