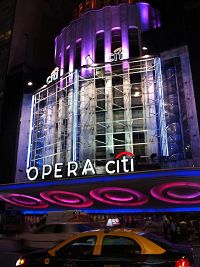 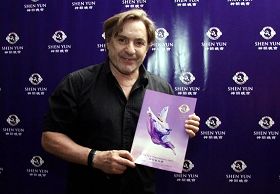 Among the many distinguished guests of the show was Argentinian actor Antonio Grimau, who said that he was honored and proud that Shen Yun had chosen to start its 2013 World Tour in Argentina.

He commented on the depth of the stories and the artistic expression of the dance sets, saying, “I think from an artistic level, each scene has wonderful discipline, with each story having this very important depth expressed through the gestures and the body language [of the dancers]—that is really admirable.”

He continued, “It’s amazing. The truth is, to have all of this enormous history behind each one of the works is touching. It is really watching a very rich experience, very rich culturally. It has that very important ability to touch you.”

Mr. Grimau said that the level of clarity and simplicity in the performance is one of the reasons Shen Yun is touching. He also commented on the show's “enormous depth.”

Mr. Grimau said he would definitely recommend the performance to his family and friends.

Also in the audience was Regina Braied, a musician, educator, and radio broadcaster. Mrs. Braied said that she founded both an education center in Argentina to promote and teach music, and a radio program “precisely dedicated to the dissemination of musical art.”

She said that Shen Yun was a jewel for her country. “Tomorrow morning, I am going to call a lot of people I know so they don’t miss it—it’s a jewel to have this here in Buenos Aires,” she said.

Mrs. Braied described Shen Yun as “a great addition to the culture in our country,” adding that it is a joy “to be able to appreciate the sensitivity, the sweetness, that [Shen Yun] transmits.”

Mrs. Braied has studied music throughout her life in Argentina and Europe. She teaches with the Dalcroze method and the Kodaly method, which use ear training and improvisation, and connect music, movement, mind, and body.

She particularly enjoyed the orchestra, which combines traditional Chinese instruments with Western instruments. “The music—it penetrates and it wraps around you through the movements of the dancers,” she said.

She noted that there was a “good balance between the movements and the instruments, which effectual revealed the dancer’s character.”

Accompanying Mrs. Braied to the show was her grandson Arial Cohen, who is also a musician. Mr. Cohen said Shen Yun offered Argentina a new type of art and culture.

“It’s not common to see these dances, hear this type of the music, see the costumes, or contemplate these concepts,” said Mr. Cohen. He felt that the artists had created a very good impression.

Mrs. Braied said that the level of morality that is at the heart of every Shen Yun dance set, could teach younger generations to treasure peace and empathy for others.

“Through [traditional Chinese] culture you reach towards peace, to faith, and the development of sensitivity,” she said. “We should motivate people from childhood to have this sensitivity.”

She said that she wanted as many people as possible to experience Shen Yun.

“I hope everybody can see this show—even more so for the young people— so that they can know what good music is, good dance, even the movements, that sweetness that they transmit.” 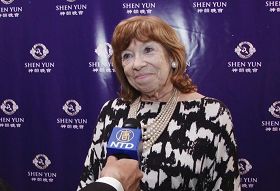 Another audience member, Fanny Mandelbaum, a renowned journalist and television personality, had glowing praise for the show.

“It makes your soul rest,” she said. “You come out [of the opera house] and you can’t believe that outside there is so much noise—it is as if [seeing the show] makes you feel like you entered an oasis.”

Mrs. Mandelbaum thought that the show “was amazing,” adding, “Not only the show, but the choreography, the costumes, and the quality of colors.”

She described how she felt during the performance, saying, “I closed my eyes and I could feel as if something was embracing me, [like a] crystal eggshell.”

She felt as if something divine was being imparted through each of the different performances. “You feel that heaven exists, and that indeed one needs to look more to the heavens,” she said.

Mrs. Mandelbaum explained that she also enjoyed the backdrops and the orchestra, which she said “seamlessly blend[s]” the typically disparate sounds of the East and West.

“Great!” Mrs. Mandelbaum enthused. “The combination of Western sounds with Asian sounds adds a special thing to it; and the conductor was fantastic, the orchestra conductor.”

She talked about the difficulty of performing traditional Chinese dance. “One must really be in deep concentration to do everything that they do because it’s incredible,” she said, adding, “I loved knowing it is classical Chinese dance. It’s something fabulous.”

Mrs. Gimenez has had an amazing career in Argentina since the 1960s. She has appeared in many movies, theater shows, and of course, her well-known Susana Gimenez television show.

She said that the animated, digital backdrop transported her to “incredible places.”

“I am very glad to have seen it, truly I loved it!” she enthused.

The TV host said that she saw the entire performance as a work of art, noting the level of agility needed to perform the tumbling techniques found in classical Chinese dance.

When Mrs. Gimenez found out that the Chinese Communist Party does not allow Shen Yun to perform in China, she said that the regime has no right to prohibit Chinese culture, “which is thousands of years old,” adding, “Everyone in the world should watch this, in China too.”

“The Chinese people would love it. I don’t understand why the Party prohibits art,” she said, noting that it’s strange for a government to prohibit the ancient arts.

Mrs. Gimenez said that Argentinians shouldn’t miss it. “It is something different. We are so used to always watching the same type of musicals. It is something that can’t be missed,” she exclaimed.

She said that she immediately bought her tickets after watching a television ad for Shen Yun. “When I saw the ad, I was running on my treadmill, which has a television mounted on it. I saw it and said, “I have to go.”

“I think what can’t be described [about the show] is the surprise,” said Ms. Alberó.

Looking at Western society she noted that there is a tendency for people to see their day-to-day jobs as the ultimate goal of their lives.

“I think there is some kind of subversion of values that leads to the issue of excessive work and people putting material gain over spiritual wealth.”

“They are showing the physical, the spiritual, and the intellectual. I’m fundamentally interested, because I believe it the values portrayed in the show should be fostered in the world; everything about spiritual messages, the messages about values, basic values to human coexistence, and above all the need to lift [the spirit], to put the spirit ahead of everything.”

The actress said that the values portrayed by Shen Yun improve the quality of life in the Western World.

Ms. Alberó, who has been a well known actress since the late 1970s, said Shen Yun impressed her not just because of its aesthetic beauty, but also because of the way it masterfully combines dance, music, colorful costumes, and beautiful scenes on the stage.

“They are integrating different disciplines [such as] music, singing, and also dance,” she said.

Ms. Alberó also praised the digital backdrops and the Shen Yun orchestra, noting that is rare to see dances accompanied by live music these days.

Concluding she said, “I think is obviously a show to recommend.”

Audience member, choreographer, and expert tango dancer, Victoria Colosio, described the Shen Yun performance as “spectacular, overwhelming,” adding,“One cannot even think nor reach the value of such a showcase of beauty, of strength.

“But above all, what is interesting is the poetry that joins truthfulness and courage. Here music unites the arts, the singing, and the varied orchestra,” explained Mrs. Colosio.

“What I liked the most is the expressive poetry of the [Shen Yun] singers whose songs reach out beyond [the mundane world],” she said. “Reincarnation and power is in other places of the universe. I love that—we are so little, very interesting.”

Mrs. Colosio then talked about what moved her about the show. “One is moved by the opportunity to enjoy such a genuine, authentic [performance], full of love and truth.”

Finding it hard to describe Shen Yun using words, she said that she would tell her friends to come to the show by saying, “For example: splendid, wonderful, you have a moment of harmony and beauty,” the professor of dance said. “Try to go—it’ll give you joy and a lot of truth, above all.”