(Minghui.org) One day in March 2012, a patient near-death was taken to Hebei Provincial Chest Disease Hospital. It was difficult to tell the patient's age due to the severe fluid deterioration in her body. What was puzzling the hospital's doctors was that this patient was accompanied by 4 policemen every day. She was diagnosed as having severe tuberculosis, anemia and malnutrition. After months of treatment her condition still didn't improve so her family members took her back home.

This lady is 43 year-old Tangshan City resident Ms. Zhao Ye. She was an artistic designer employed by Tangshan Ceramic Research Institute where her designs received awards. Afterward she was doing design work at a residential decoration company. When she was in her thirties she was weak and plagued by diseases and she had a hot temper. After she practiced Falun Gong her diseases were gone and her temper became mild. Her family members were all very glad. In 2011 Ms. Zhao was forcibly taken by the police to Hebei Women's Forced Labor Camp, and in less than a year she was tortured to be extremely thin with a body weight of only around 60 pounds. Her right arm was disabled, and her mind was unclear. The labor camp did not allow her to be bailed out for medical attention until she could not take care of herself.

In five months, Ms. Zhao's family spent several tens of thousands of yuan for her medical care but she still didn't recover and could only survive on infusions and medications. Even so, her persecutors at the Hebei Women's Forced Labor Camp still forced her family members to report her condition to them monthly. 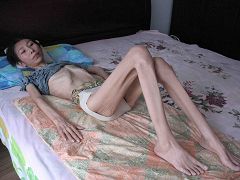 Ms. Zhao Ye was tortured to be extremely thin

On February 25, 2011, Ms. Zhao Ye gave a video CD of Shen Yun Artists' performance and was arrested by Huoju Road Police Station of Tangshan City. The Domestic Security Division of Gaoxin Police Department immediately took over the persecution of Ms. Zhao and illegally imprisoned her at Tangshan City Detention Center without any confession or signature from Ms. Zhao. On March 11 the chief of the Domestic Security Division of Gaoxin Police Department, Liu Hong and Xie Lei etc. forcibly put handcuffs on Ms. Zhao and took her to Kaiping Forced Labor Camp for 21 months. In May Ms. Zhao was taken to the third brigade of Hebei Women's Forced Labor Camp for continued persecution.

When Ms. Zhao arrived at the labor camp she was about 160 cm tall with a healthy appearance. She walked with energy and talked with candidness. She had a daughter in middle school who was taking the high school entrance exam in 2011 and needed Ms. Zhao's care. Her husband often had to travel due to his work. Thus her arrest completely disrupted her family's normal life. When she arrived at the labor camp, officers tried to force her to give up her belief. Ms. Zhao validated Dafa's wonders with her personal experience and resolutely refused to give up her belief or cooperate with the forced slave labor.

Forcing Falun Gong practitioners to do slave labor is one of the major means of persecution at the labor camp. The labor hours were as many as 9 and a half per day. Sometimes when practitioners could not finish their task they were forced to do overtime during noon or night time. After a year of such labor, many strong people in their twenties would become extremely weak. Their labor in collaboration with outside factories was intended to make money for the labor camp. The guards not only forced those practitioners who didn't transform to do labor, but also extended their terms.

On August 15, 2011 the practitioners at the third brigade resisted the persecution and protested the illegal slave labor. Ms. Zhao was among them. All the people were gathered in the hall on the second floor. Almost all the guards rushed out, some holding electric batons that gave off intimidating sparking noises. Lu Yaqin ordered the practitioners to stand in rows and shouted, “I don't believe that I cannot subdue you guys. I will extend all your terms by 3 months.” Every practitioner who didn't participate in the slave labor was called out by her.

Ms. Zhao was the first one called out and she was dragged by them into their office where there is no surveillance camera. The guards used electric batons to shock her. The batons measured over 20cm long and 3cm diameter. In August Ms. Zhao wore short sleeved shirts. They pulled up her shirt to shock her clavicles where the wounds from the shocks are visible. They shocked her neck and her mouth. As a result, Ms. Zhao's teeth and mouth ached for several days. The main guards carrying out the torture were Lu Yaqin and Liu Ziwei. Feng Kezhuang stayed in the adjacent room to monitor, and several male guards stayed outside of the office to shout in support of the torture. About half an hour later Ms. Zhao was brought out of the office and the guards once again forced her to join the slave labor. Then practitioners Liu Suran and Zhang Ni were taken into the office to receive torture.

This scene reminded one of the Cultural Revolution and was even more terrifying. On one side, the guards were shouting hysterically, on the other side, people were sweating and trembling. The elderly people were quivering inside and sweating on their faces. The younger ones started to cry. Falun Gong practitioners had no fear and watched quietly. This situation lasted until dinner time and no one paid attention to the fact that the sky became cloudy and rain started to fall as if heaven were crying.

The next day Ms. Zhao was forced to stand for a whole day. On the third day she still didn't give in and Liu Ziwei dragged her again into the office to beat her with electric batons for half an hour. When Ms. Zho came out, she pulled up her sleeves and everyone saw that her right upper arm was purple. In the afternoon she was threatened by guard Shi Jiangxia, who forced her to recite the regulations of the labor camp. Shi's husband Zhang Ning was also a guard at the labor camp. He was making threats by the side, saying, “let me go out with you to talk alone.” Afterward Ms. Zhao was forced to sit on the workshop floor for a whole day and sleep in the hall. The female guards assigned someone to watch over her to prohibit her from speaking with others. The guards separated Ms. Zhao from others, trying to conceal the fact that they beat her.

Ms. Zhao slept in the hall for about 3 months. Due to pain and nerve damage, her right arm muscles started to atrophy and her right palm became apparently smaller than her left palm which caused her great inconvenience. She could only use her left hand to eat or rinse, and when washing clothes her right arm could not use any force. Her right arm felt as if detached from her body. She requested several times to receive checkups at a normal hospital outside. The labor camp doctor Ma (male, in his forties) said there's no need for a checkup as long as the bones were not broken.

In September when Ms. Zhao's family member was visiting her, she mentioned the beatings she received at the labor camp and the guards immediately cut off her phone conversation. The guards were very afraid of their crimes being exposed. Shi Jiangxia blocked all information regarding Ms. Zhao, including her letters and phone calls each month. When her family members finally heard about her situation and requested a medical bailout, the guards deceived them by saying that the labor camp doctors had already cured her.

In December, two badged personnel came to the camp to check on certain things. It was suspected that some people reported to upper authorities the beatings at the labor camp. Many sites inside the camp had cameras installed. The guards were all careful and not so intimidating as before. Ms. Zhao was arranged to sleep inside a room. However, her health condition deteriorated rapidly. At first she coughed, then her lungs had sputum. When she slept her noisy breathing could be heard everywhere. Later on she would cough frequently and she participated in the normal daily activities with great difficulty. By the end of 2011 she had become extremely thin and her hearing was deteriorating. At the beginning one of her ears lost the ability to hear, then both ears stopped hearing. You had to shout for her to hear.

At the beginning of 2012, her condition was even worse. She could only eat a little and had diarrhea. Her sputum was black, her movement was slow, her walking was shaky, her consciousness was weak and she hallucinated. She could not even recognize her own handbag and apparently her mind was not clear anymore. Nevertheless, the brigade chiefs Wang Xin and Shi Jiangxia both claimed she was just acting and didn't pay attention to her. Once in the dining room, Ms. Zhao had diarrhea and asked Wang Weiwei for permission to go to the restroom. Wang impatiently dragged her back into her seat. In the end, Ms. Zhao had to relieve herself in her pants. Other people bought her a cooked egg but she vomited after just one bite.

Due to severe malnutrition and diarrhea, Ms. Zhao had symptoms of dehydration and fainted many times. Once she fainted in the restroom. Later on she could not even walk and had to be carried to the workshop. Her mental state was even worse. She frequently said that she saw her father outside the windows to take her home. She asked the guards to allow her to go home. Everyone shed tears for her but the guards still ignored her requests. They didn't show any sympathy towards life, especially those of Falun Gong practitioners.

On March 1, 2012 Ms. Zhao's condition was very critical and the labor camp allowed her to get intravenous drips in the medical room. The brigade chief watched over her, not allowing anyone to contact her for fear of leaking information. Later on Ms. Zhao was transferred to an outside regular hospital.

On March 14, Ms. Zhao's family members got the message and rushed to the Hebei Province Women's Labor Camp. At that time, Ms. Zhao was in a half-conscious state and could not care for herself. She had a persistent fever of over 40 degrees Celsius and her weight was only about 60 pounds. The labor camp finally allowed her family to bail her out for medical treatment, pushing the burden to Ms. Zhao's family members.

Ms. Zhao's family had spent several tens of thousands of yuan for medical treatment but she hadn't recovered. She still needed daily transfusions and intravenous drug injections. Even so, the labor camp still forced her family members to report her condition to them monthly.

When Ms. Zhao was taken to the labor camp she had a beautiful face and was full of energy. She was happy to help others. Even after her right arm was disabled she still helped others to carry water and clean to the best of her capability. However, in less than a year, the labor camp tortured this kind person to the point of only weighing 60 pounds and her whole body was disfigured.

This kind of sad thing repeatedly occurs at labor camps and prisons in mainland China. What Ms. Zhao experienced was just the tip of the iceberg. Falun Gong practitioners are tortured in China just for believing in Truthfulness-Compassion-Forbearance. They are kind, upright and with high morality, but they are suffering tribulations under the rule of the CCP. Falun Gong practitioners call upon people to help end the brutal persecution. Heaven is allowing for every being a path to be saved by withdrawing from the CCP's organizations and to stand on the side of good people.