(Minghui.org) Swedish Falun Gong practitioners collected signatures in Hötorget in downtown Stockholm and in Medborgarplatsen, one of the largest squares in this capital city, on October 20. Their goal was to expose the forced organ harvesting from living Falun Gong practitioners taking place in China and to encourage passersby to sign a petition urging the UN to send an independent team to investigate this crime and put an end to it as soon as possible. 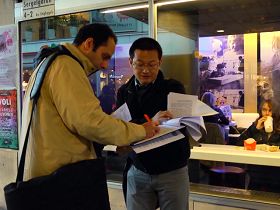 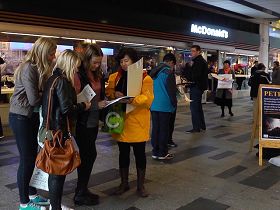 The Chinese regime's crime of harvesting organs from living Falun Gong practitioners has received extensive media coverage this year all over the world. Swedish politicians, human rights organizations, and people from all walks of life were shocked by these revelations. Members of the Swedish Parliament appealed jointly to the UN, urging the UN Human Rights High Commissioner to send an independent team to conduct a thorough investigation of live organ harvesting in China. 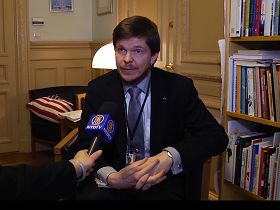 Mr. Andreas Norlen, Member of the Swedish Parliament, beng interviewed by the media

Mr. Andreas Norlen, Member of the Swedish Parliament, said in an interview: “Obviously I was shocked. Such brutalities are absolutely unacceptable; it’s horrible! As far as I know, a few years ago, there was an allegation in a UN report regarding this matter. In my opinion, it’s necessary to clarify what’s happening. Because it’s about extracting organs from live people, it’s a serious violation of human rights. Especially on such a large scale with 40,000 or more people (having had their organs been extracted), it is terrifying. Those who are responsible should be brought to justice.” He also said, “If this is taking place in China, it’ll be such an outrage against human rights. Nothing could possibly compare with it except the worst atrocities in World War II. I think it’s going to be a huge scandal, and it must be thoroughly investigated.” 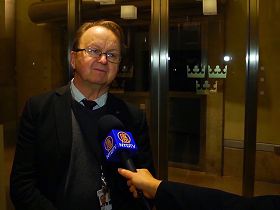 Mr. Christer Winback, Member of the Swedish Parliament, interviewed by the media

Mr. Christer Winback, Member of the Swedish Parliament, said, “My colleague and I signed the petition to call for an investigation of these allegations. We call upon the UN to put pressure on the countries involved and to investigate China. I think this is abhorrent. If there is any suspicion at all with regards to this, that in itself should permit us to investigate the truth behind it; if it’s really the case, then we should stop it. To ignore the underpinning principles of human civilization and the dignity of human beings, and to use human beings as a source for wholesale supplies, is extremely immoral.” 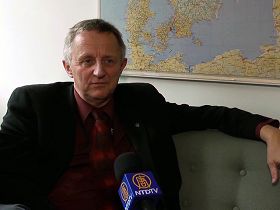 Mr. Staffan Danielson, Member of the Swedish Parliament, being interviewed

Mr. Staffan Danielson, Member of Parliament, said, “If the government legalizes such things, or is doing so, the UN and other organizations should immediately intervene and constrain it, as this is a matter of life and death. All the procedures must be open, transparent, and respectful.”

People Hope Their Signatures Will Help Stop Such Atrocities

Despite the rain, many people stopped and signed their names to show their support and get the UN to send an independent team to investigate the CCP’s live organ harvesting. They also hope to stop such atrocities.

An older couple were filled with indignation when they heard about it. After they signed the petition they said, “This is simply horrifying! It could only happen in a communist country like China. The Communist Party should not exist. It’s outrageous!”

Some children asked their mothers to sign, and some people asked their friends to come to sign after they had signed themselves. A robust middle-aged man was very angry after he heard about the organ harvesting. He signed and said, “People shouldn’t take such organs!” He had a long conversation with a practitioner.

A young man from Canada carefully signed his name on the petition. When practitioners showed him their appreciation, he said, “I should thank you! I’m from Canada, and I've seen Falun Gong practitioners in Canada doing the same thing. You guys are doing a lot of work! Thank you!”

A woman with her son asked practitioners for more materials to take after she signed the petition. She said, “I’ll let more people know about it; we all need to work together to stop it.”